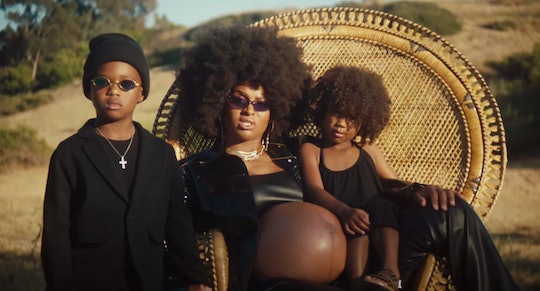 Before she gave birth to her third child earlier this summer, Ciara filmed her new "Rooted" music video while pregnant. Nine months pregnant, in fact. The 34-year-old singer dedicated her empowering new song to all of her "Black Queens & Kings," as she shared on Instagram. "Always know everything you need to survive and thrive is rooted in you!" she wrote.

The music video for "Rooted" features Black dancers, footage of protesters raising their fists, demanding justice for Breonna Taylor and George Floyd. One woman in the video wears a shirt that has Taylor's face with the words "Say Her Name," while another holds a sign of Floyd's face.

At the end of the video, Ciara shares that a portion of the proceeds made from the song will go to Grant Makers for Girls Of Color, an organization that utilizes resources so Black girls can achieve equity and justice. "To all my Young Rosas's and Young Luther's, keep marching," she shares in a message as the video ends. "Don't stop fighting for what you believe in. To all my Black queens and kings, continue to plant and spread seeds of love, hope, and pride in your tribe. Everything you need to survive and thrive is in you. Stay rooted."

In a separate Instagram post, Ciara revealed that she was nine months pregnant and just two days away from giving birth to her third child when she filmed her dancing scenes in the music video, which also featured her two kids, 6-year-old son Future and 3-year-old daughter Sienna. Ciara and her husband, football player Russell Wilson, welcomed their son, Win Harrison Wilson, on July 23.

While she told Entertainment Tonight that dancing while pregnant presented a bit of a challenge for her, it left her feeling "empowered." "It just felt like it was something deeper for me with this record; the meaning of this song, knowing where I was in my life, carrying a child, getting ready to bring this new seed to life," she told the news outlet. "Everything we need in all of us is rooted in us, and I believe in that. So I just felt empowered through it all."