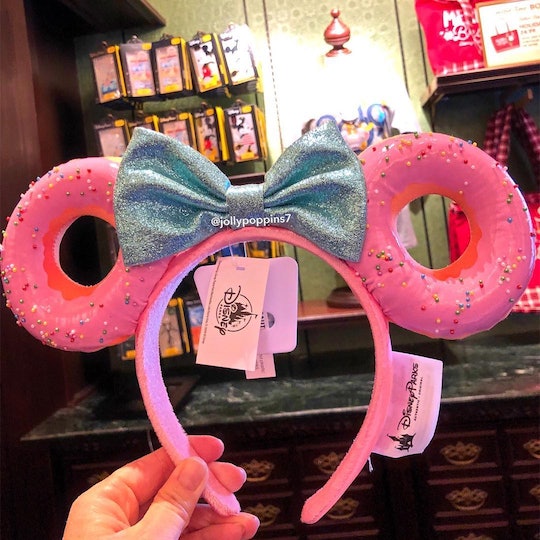 Every few months, a new set of Minnie Mouse ears crops up at a Disney park. And every time, without fail, photos of those ears make their way to Instagram. Most recently, a Disneyland guest spotted donut Minnie Mouse ears, and fans are going wild over the new accessory.

Jennifer Stowell, a travel agent specializing in trips to Disney parks, shared a photo of the ears on Instagram, where she is known as @jollypoppins7 and boasts more than 28,000 followers. "NEW DONUT EARS at the Emporium on Main Street in Disneyland!!! EEEEEEK!" Stowell captioned a photo of the ears, which was taken inside the shop at the Los Angeles park. As seen in her picture, the ears are set on a pink headband with a glittery blue bow in the center. Representing the ears are pink, sprinkle-covered donuts (non-edible donuts, unfortunately).

Stowell added that the ears cost $27.99 before tax. She also wrote, "Sorry, I’m not a personal shopper," followed by a smiley face — and I don't blame her. The comments section is flooded with people marveling over the super cute ears — and I don't blame them. From the Dole Whip to the Mickey Ice Cream Bars to the 'Ohana bread pudding, dessert is a huge part of the Disney experience, so it's about time a sweet treat was featured on a set of classic ears.

If you're already pulling up Disney's website to search for a pair of donut ears, you may not want to get too excited. Based on the comments, the ears are currently out of stock. Womp-womp. According to one commenter, "They pulled these from the store … super lame." Another person commented: "I went yesterday to Disneyland and I asked them specifically for those ears and they said they are not out yet?" Stowell responded that she is hopeful that Disneyland will restock soon, and she added that the ears might eventually pop up on the Shop Disney Parks app.

The donut ears are not currently listed on the ears page of Shop Disney's website, nor are they on eBay, unfortunately. Disney did not immediately return Romper's request for comment regarding how people can buy a pair.

Many people commented on Stowell's post simply expressing how awesome the ears are. "We need to go to just get these donut ears," someone commented, tagging a friend. "I swear they made these specifically for me," someone else wrote. "Why didn't I see these when I was there!? Neeeeeed," added another.

So if you're heading to Disneyland anytime soon, be sure to look out for the park's latest pair of ears. Bonus points if you find a matching donut that you can actually eat.