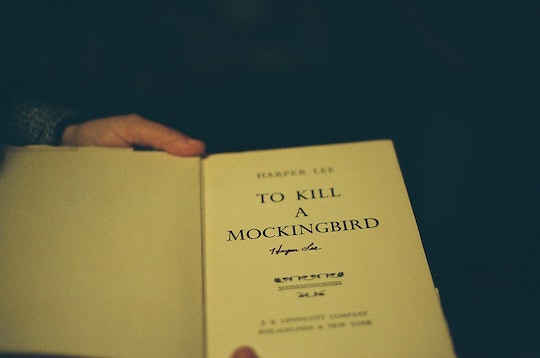 Harper Lee Taught Me To Love Books, & That Changed Everything In My Life

It seems that 2016 is out to break our hearts in the worst way. First, we lost David Bowie. Then, we lost Alan Rickman. Now, the world woke up Friday morning to the devastating news that beloved author Harper Lee has died at the age of 89. Can we be done now, 2016? Are you done ripping away from us the very people who, with their art and human presence, actually carved and shaped the very emotional landscape upon which our lives are built? This isn't a joke. This is hard. These people matter in such tangible, real ways to so many millions of people, and I'm definitely one. And the loss of Harper Lee might be the hardest loss for me to process.

For me, personally, it was difficult to come to terms with David Bowie and Alan Rickman's passings. Music is an essential part of my life, as are movies, and the genius of both artists impacted me as a scared girl in an abusive home, and a lost girl who loved the bad boy in every man. But to lose Harper Lee is to lose a piece of literature. Which might sound impersonal and not as significant, if you're someone for whom books don't play a huge role in your life. But for me, losing this piece is like losing a part of what it means to be just me; me and my books, amidst all of that other difficult noise in my life. Losing Harper Lee is to be reminded, in the most painful of ways, that while certain artists can use their music to transport you to another, safer place, or blur the lines of right and wrong until there's nothing left but intoxicating, intriguing grey, others can instill in you a lifelong love that transforms you into a better, healthier human being. Harper Lee was that artist.

I didn't always love to read. I loved playing sports; every sport and any sport and especially the sports society reserved for "just the boys." My father gave me the name "Danielle" so that he could call me "Dani" and it said everything about both his expectations of me and the inescapable disappointment I brought to him before I was even born. He already had two daughters from a previous marriage, so when I entered the world, he was disappointed that I wasn't his son. In an attempt to ease his dismay and earn his favor, I rejected anything considered "female" and adopted anything that was considered "male." I didn't wear make-up and I dressed like my young dude friends; I played football (until they told me I couldn't anymore); I didn't like playing with dolls. And I didn't like reading because that is what girls did, and I shouldn't have been a girl.

And then I picked up Harper Lee's To Kill A Mockingbird. It was assigned reading and through my perfected eye rolls and exacerbated sighs, I realized that I had found my true passion — my first love — in the pages of a text revered and beloved by those who knew far better than I did. Thanks to a having a malignant, toxic parent, I was no stranger to abuse or violence or heartbreak, but Lee weaved the injustices of the world into a story that I could digest (albeit with great difficultly at times, but even that difficulty was a pain associated with growth, whereas all I'd ever known until then was pain from damage).

She took my hurt and put it into other characters, placing it in exactly the best place for me to deal with it: removed from my personal reality, yet close and real enough for me to know the characters who carried it. I could love them and mourn for them and find resolution for pain I identified with in ways I couldn't force in my real life.

I found myself in her words; a self that I didn't know I was stifling. It was a self that I realized deserved to be celebrated, regardless of my gender and the way my father seemed to feel about it.

There's one quote in To Kill A Mockingbird that has grown with me like an extra rib, strong and close to the chest. The moment it was digested by my wide eyes and soon after, plastered to the corner of my brain, a future I never thought possible, or even envisioned, was set in motion:

Until I feared I would lose it, I never loved to read. One does not love breathing.

When I was growing up in an abusive household, there were so many things I feared: I feared pain and, at times, even death; I feared for my mother and my brother; I feared that I would never make my father happy, not because of my actions or lack thereof, but because of who I was on a molecular, biological level; I feared for the days he would come home angry, when we, his family, would be left helpless to hide from what that anger brought with it. But what I should have been fearing more than anything else was a fear I didn't realize I had until I started reading. Before picking up Harper Lee's book, I learned not to love myself. Because if my own father couldn't, why should I? I learned what to like in order to make him happy, and what not to like to prove to him that I was worthy of his praise or admiration. I was doing things that made me unhappy, for a fleeting moment of happiness felt by someone else.

But when I read, I was truly happy. When I read, I realized that I loved people because they're not all like my father and yes, they can create (and do create) beautiful things, rather than simply and violently destroying them. When I read, I was breathing. I was inhaling and exhaling uninhibited, freely and without regret or apology. I could get lost in another world with another set of problems, problems that were just as important and just as vital and somehow even more digestible because they weren't mine. They would be solved by the turn of a page...or maybe they wouldn't, but the outcome was beyond my control and I found peace in the inevitable. Harper Lee had already decided what could and would happen. I was just along for the ride. Involved but safe. Informed but invulnerable.

And that's when I realized that what I truly feared, was the possibility of never being really, truly happy. I found happiness in a book, and the fear of losing it has driven me to always read, always write, always create, and always be unapologetic about my need to do all of the above. Not only had a found a love in reading, I had found a love in myself — and that love told me that I deserved better. I deserved joy and laughter, even if there wasn't a whole lot to be found.

And those lessons are now being carried on with my son. His gender will never define what he "should" or "shouldn't" like, and I will never be disappointed in him because of who he is, decides he is, or ends up becoming. Now, we get lost in books together (although, right now they're of the Sesame Street variety) and he won't have to use literature to escape his reality, but rather, to expand and enrich his reality.

Thank you, Harper Lee. For teaching me not just how to love reading, but how to love breathing, so that I can teach my kid, too.