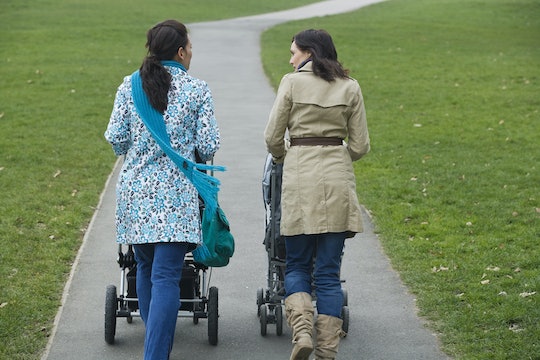 How To Make Mom Friends, According To An Expert

As the first person in my friend group to have a child, I had to forge my own path through parenthood. I knew talking about different diaper brands and ring slings was boring AF, but I'm someone who processes her experiences by talking about them so I really needed to talk about them. So, for my own wellbeing, and the survival of my existing friendships, I needed some friends who were on the same page. But how do you make mom friends? It sounds easy, sure, until you're diaper-deep in some contrived play date wondering how in the hell you're going to break the ice with a mom who appears to be as equally spent as you are.

Snap Inc., in partnership with the Protein Agency, recently conducted a global study of 10,000 people about how culture, age, and technology shape preferences and attitudes around friendship. Ten experts from around the world (including Kirmayer) contributed to the ensuing "Friendship Report" to contextualize the data, which show that interacting with friends, whether in person or online, leaves us feeling overwhelmingly positive emotions, like happy, loved, and supported. And who needs to feel love and support more than a new mom, right?

Fortunately, Kirmayer assures us that new moms in particular are often highly receptive to the idea of making new friends. "Going through a similar life stage can really bring people together," she tells Romper via phone. But making new friends outside of a structured setting (school, work, church, etc.) is a challenge under any circumstance, especially for an adult. And with the challenge of a new baby, it can feel extra hard.

"So often people kind of minimize that or overlook that or feel as though they're doing something wrong if they're looking outside of their friend group," she says. "Acknowledging that it's normal to want to make new connections during this time ... is so important for our well-being and health and especially so during a difficult period like parenthood."

So maybe you don't have time to meet a mom-friend for lunch to talk about your week, but maybe you can meet her while you're out on an errand, or even just send a Snap of your messy house so you can commiserate together.

But how?! It helps to know what people are generally looking for. According to the Friendship Report, "honesty" and "authenticity" were found to be the most important qualities of a best friend, whereas "having a large social network to tap into" was least important. But Kirmayer says one's larger social network may be a key factor in forging new friendships as a parent.

"This could be a really good time to turn an acquaintance into a friend," she says. "A lot of our new friendships are actually with people who are already in our social circle... someone you lost touch with, or a friend of a friend, or somebody who you met online a long time ago and haven't really stayed in touch. Those types of acquaintances can be really receptive to becoming friends."

Of course! The answer was right in front of us (or vibrating in our back pocket) the whole time. Not only can you reach out to people yourself, you can let it be known to your immediate friend circle that you're on the lookout for a "Mom Tribe."

Another option? The playground. Kirmayer suggests the idea of using your child as a proverbial foot-in-the-door can help forge new friendships with fellow parents. Of course, if you're anything like me, you're thinking, "So I just exchange information with someone I just met? How do I do that without seeming weird?" Kirmayer acknowledges that such directness can often feel unsettling.

"People are often very uncomfortable at the idea of being explicit about the need or desire to make new friends," she says. But consider it from the other person's point of view. "Here's someone who's interested in getting to know you better or going for coffee or going for a walk with strollers that can feel really good!"

But while we can go into parenthood alone, it's better (and more fun) to have friends to back you up.

Of course, even that reassurance can't always stave off the fear of rejection. Kirmayer admits that this is, of course, always a possibility... but probably less so than we think. "More often than not," she says, "we overestimate the chance that we will be rejected and underestimate our ability to cope." And seriously, is it that big a deal if a relative stranger doesn't answer your texts?

The challenge of mom friends doesn't end with making them: it's keeping up with them. While it's common to hear about working to maintain romantic relationships, we can often feel as though friendships are on autopilot. Kirmayer warns that friendships require "an investment of our time and energy" just as any other relationship would.

Of course, when it feels like all your time and energy are going toward your child, it's typical to wonder how you're going to manage friendships, too. It can feel overwhelming, to be sure. But the truth is that, sometimes, just a little bit will do. "It's really a matter of balancing quality time with small, frequent check-ins," Kirmayer tells Romper. So maybe you don't have time to meet a mom-friend for lunch to talk about your week, but maybe you can meet her while you're out on an errand, or even just send a Snap of your messy house so you can commiserate together. "Using technology to our advantage is helpful," Kirmayer says, adding that technology is a great way to "lift the veil" and show an authentic view of motherhood that can help you maintain a connection with your mom friends.

New parenthood is a trying time, and it can seem daunting to add the challenge of making new friends on top of everything else. But while we can go into parenthood alone, it's better (and more fun) to have friends to back you up.