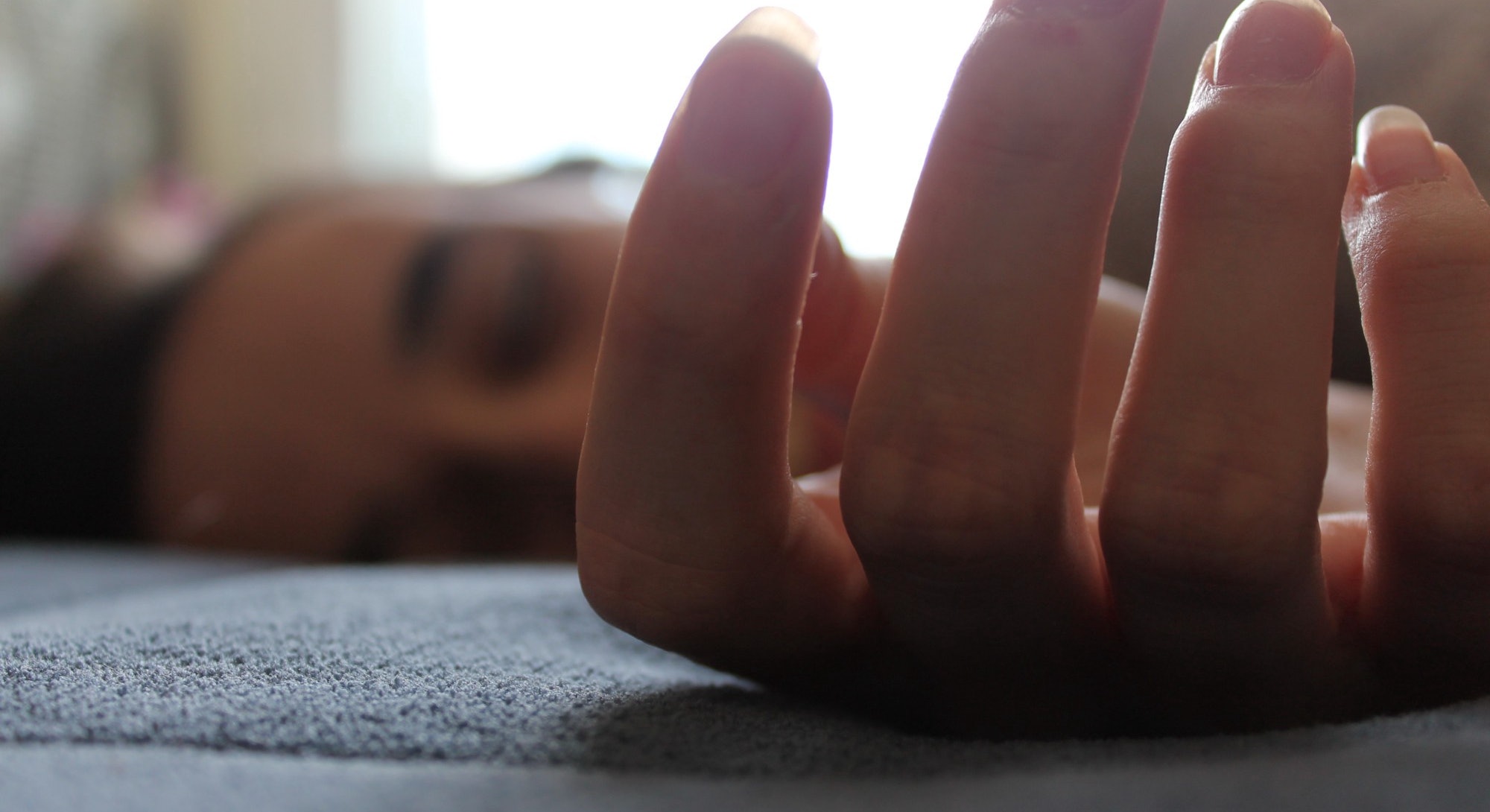 I Have Endometriosis & I Am More Than My Fertility

The onset of my period over a decade ago came with a deep and inescapable awareness of my so-called “reproductive system.” That feels like a misnomer, as reproducing was never the reason for that awareness. If it weren’t for endometriosis and the pain that goes along with it, I may have become a person who rarely thought about what is often referred to as "reproductive organs."

Because, to be honest, I’ve never felt a strong desire to have children. In fact, I have a well-established track record on the subject that predates menarche: Shortly after my brother was born, when I was just a little squeak myself, I announced to my parents one day after Sunday School that I’d decided I didn’t want to go to heaven because “the baby Jesus probably cries all the time.”

That’s not to say I never entertained the thought of becoming a parent, especially after my best friend’s son was born five years ago. I would try to envision a life with a child in it; not so much because I suddenly started feeling like I wanted to have one, but because everyone around me seemed to want me to want to have one.

They're referred to as “reproductive organs." But the uterine-fallopian-ovarian package that sits in the pelvic cavity of many who do (and don't) identify as female exists for more than just a singular purpose. Yes, the uterus doubles as a babyhaus. Yes, the fallopian tubes function as a chute for unfertilized eggs. And yes, said eggs originate in the ovaries. But the ovaries in particular play a much more diverse role. Biologically, socially, and emotionally, the function (or dysfunction) of the ovaries has far-reaching bodily consequences.

The ovaries pump out hormones you’ve probably heard of before: estrogen and progesterone. It’s true that they’re essential to human reproduction — from first period to postpartum to menopause. Don’t be fooled, though: These hormones (as there are more than one type of each) are no one-trick pony. The hormonal dream team has other super powers that go beyond babymaking.

The duo helps maintain the moisture, structural integrity, and microbiome of the vagina. Estrogens specifically help regulate fat stores (which is why having too little body fat can cause menstrual cycles to become erratic or stop all together). Estrogen also influences bone health, which is why having less estrogen (whether due to suppression from illness, medication, or menopause) can make a person more at-risk for thinning bones, which can lead to osteoporosis and fractures.

Before I had the laparoscopy that would ultimately reveal a paratubal endometrioma and endometriosis in the cul-de-sac behind my uterus, the surgeon had impressed upon me that the procedure could potentially impact my fertility.

Other important jobs these hormones have? Helping to regulate insulin sensitivity and producing collagen in the skin (while it’s often linked to aging and wrinkles, collagen is also important to wound healing and infection prevention). Our hormones also help maintain homeostasis, for instance, by helping to regulate our body temperature. Estrogens also affect cholesterol production, which, in excess, can lead to heart disease.

So, not only are these hormones utilized for more than reproduction-specific tasks, they aren’t even strictly relegated to just that one system of your body (even if they are constantly associated with it).

We can be very much like our hormones in that respect: While we may know that we amount to more than what we can do, it can be tough to break through years of association. Of course, unlike estrogen — which is more or less programmed into the tasks it must achieve in its lifetime — we have whole bodies to work with. We also have agency and the ability to make choices.

At least, that’s what we’re taught. Ideally, that’s how it should work. But sometimes our stories play out in such a way that it feels like we, too, were programmed to a particular fate. Sometimes, it seems more like external programming — that of those around us and of society at large — is what inhibits us. It may, at times, even endanger us.

Before I had the laparoscopy that would ultimately reveal a paratubal endometrioma and endometriosis in the cul-de-sac behind my uterus, the surgeon had impressed upon me that the procedure could potentially impact my fertility. I was 19 years old, on medical leave from college, and couldn’t even muster up the social grace to pretend that I gave a sh*t. So, when I came to after and she told me what she’d found, I was just relieved. First, of course, that there had been a reason for my pain and illness. That it hadn’t been “all in my head” or “stress” — which had been the assumption. That validation aside, having heard her describe the grotesque state of things, I naturally assumed if it was so gnarly, dysfunctional, and damaging that she must have taken the whole mess out. That it was all gone and now I’d be better. I’d go back to school and finish the paper I’d been trying to coax into existence on the role of apoptosis in the pathogenesis of traumatic brain injury.

From the beginning I’d been clear about where I stood on the subject of my fertility — and is and will always be mine.

Then, at my post-op appointment a few weeks later, and in the subsequent years during which I would review the case notes from the surgery in bafflement, I found out that the surgeon had not removed anything. Not the endometriosis. Not the cyst. Nothing. The reason was that, to have done so could have been injurious to the fallopian tube... which had already been injured by being torqued (or wrung-out, almost) toward my lower back by the cyst itself.

I’d made it quite clear before that surgery that preserving my fertility wasn’t even on my radar as a concern. I’ve since made that point fervently clear in every interaction I’ve ever had with a doctor. Yet they question me every time. Not only have they questioned my ability to perceive pain and illness in my own body (and consistently doubted it) but they also, apparently, are dubious of my ability to know any number of things about myself. And my life.

To avoid the stare-down that takes place when these medical professionals are waiting for me to cave, I have often offered a very half-hearted, “Maybe when I’m older..." just to placate them. But as the years went by, I got sicker and sicker until the pain and symptoms had spread well beyond my reproductive system... until there was hardly a system in my body that wasn’t hurting or malfunctioning in some way. At that point, I no longer had the energy to even pretend I was thinking about becoming a parent. I couldn’t imagine a life with a child in it. Some days I struggled to envision any kind of life for myself at all, even alone.

From the beginning I’d been clear about where I stood on the subject of my fertility — and is and will always be mine. That being said, even at 19, I understood that what I valued more than the express ability to reproduce was having the choice to do so.

Part of that is physical, of course, and down to those organs we earlier implicated. But there’s a great deal more to it, too. For one, my inability to have consistent penetrative sexual intercourse would have made it particularly challenging to get pregnant. As the years went by, the layers of impossibility grew: I couldn’t maintain an intimate relationship. I couldn’t get a date. Eventually, I just stopped trying.

And it was a relief, because I knew I didn’t have much to offer a partner. What little I could offer, I realized, might be best used to try to love and heal myself.

It made me wonder: Why wasn’t anything else that I wanted in my life enough?

Being a parent is about so much more than being able to physically bear a child. Regardless of what the media reports or your local neighborhood gynecologist tells you, endometriosis doesn’t necessarily equate to infertility. There have been times when it would have been reasonable to assume I could have gotten pregnant, had I been trying. Getting pregnant was never the problem as far as I could see.

What irked me more than the vague lost chances around childbearing — which had always been somewhat murky at best, obscured by pain, vomit, and the patriarchal opacity of medicine — was that it almost seemed like it would have been more socially acceptable to be a sh*tty parent than to not be a parent at all.

Whether you’re asking me if I want to have a baby or if I want a little more cream in my coffee, if I look you in the eye and say, “I’m sure” — believe me.

Why wasn’t it enough that I want to be able to work? Maybe have a career? That one day I’d love to finish my college degree? To be able to leave my house and explore the world beyond where I can drive before nausea forces me to pull over and heave into someone’s lilacs?

As it was continuously rammed into my head that my pain wasn’t real, I went through times when I doubted it too. I still do. Being systematically gaslighted about your own physical experience for years is traumatic. But through it all, there were certain parts of myself that were never shaken. Parts that I’m still sure of.

My conviction has never seemed to help. In fact, sometimes it seemed to make everything worse. The more sure of myself I appeared to be — the more certain of what I needed or wanted or felt — the more determined those around me seemed to make me question it. To quiet me down and get me to come around to their way of thinking. To subscribe to their perception of me. Their expectation of how I ought to be.

My ovaries and I are both more than what has been written about us. We’re more than what a textbook or an outdated social more would dictate we’re here to do.

I am more than my fertility. My life is more than a disease.

Believe me when I say this.

Believe me when I say that I’m in pain. Or that I have been harassed, or coerced, or the victim of a violent act.

But also believe me any time you pose a question to which you think you already know the answer. Whether you’re asking me if I want to have a baby or if I want a little more cream in my coffee, if I look you in the eye and say, “I’m sure” — believe me.