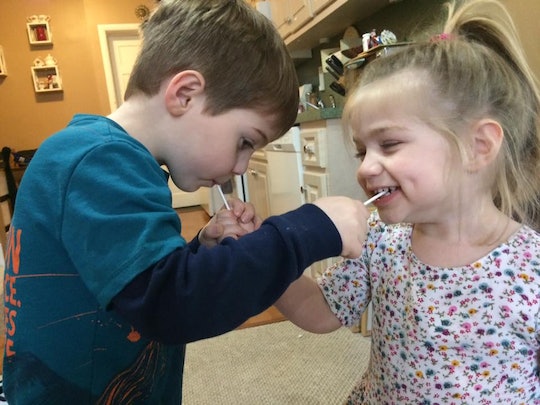 15 Moms On The Moment They Wanted Another Baby

Not everyone can pinpoint the moment they realized they wanted another baby. For some, that knowledge is just deep down, strong, and persistent. For others, the revelation comes to them as a complete, out-of-nowhere surprise. When I talked to other moms about their "magic moment," their answers (predictably) ran the gamut. Personally, I feel like I have two answers: the general answer and the specific answer.

Generally speaking, I knew I wanted another baby before my first was even born. I grew up one of a gaggle of kids, so a family with one child seemed unfathomable to me. But, hey, we say a lot of crazy things before we have one child, right? All the things we're "definitely" and "never" going to do. (We're very strong about all these declarations, despite having absolutely no practical experience.) Still, my husband and I were discussing "next time" while I was still on the operating table getting put back together after my c-section, so we were still pretty much sticking to the plan. It felt like we'd just opened our metaphorical door to party guests: the first one had arrived, but not everyone was there yet.

As the days and sleepless nights moved on, however, and we fell deeper and deeper in love with our child, we both began to think, "We still want another one, but if we can't for whatever reason, this guy is enough." Two felt less pressing. As we enjoyed the party, we kind of forgot we'd left the door open for the rest of the party. It felt like maybe this was it. Maybe everyone had arrived. Sure it was fewer than we'd expected, but we were having a blast, so it didn't seem to matter.

Then I miscarried an unplanned pregnancy. After that, the open door began to loom. The feeling that not everyone was there grew stronger. I'd always known I'd liked the idea of more than one child, but after I lost one baby I knew I wasn't done. Months later, I became pregnant with my second child, who slammed and dead-bolted the door behind her.

Here's what other moms had to say about their "a-ha" moment: