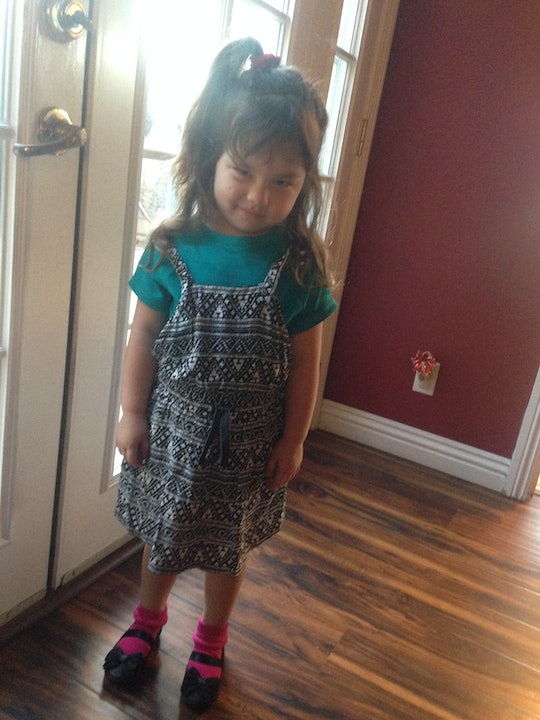 I Let My 4 Year Old Recreate My Fave '90s Fashions

The ’90s were such a fun time to be a kid. We had great shows, an awesome TGIF lineup, boy bands for days, and the fashion was all over the place. There was some kind of fashion trend for everyone and it felt like there was always a celebrity coming up with some new fad to try out (the one-shoulder overalls and flannels stick out in my mind). Of course, back then as a kid, I didn’t really start caring about my clothes until 1993 when I was a fifth grader and we finally got MTV. Tear-away pants, studded belts, flannels, and chokers were some of the trends I gave into, along with the letter-initial belt and the headbands. I definitely was not fashionable, but I never thought my favorite '90s trends would be cool again by the time I had kids of my own.

It wasn’t that I wasn’t into Dr. Martens, Dickies, and cute midriffs, but in the '90s my mom definitely was not into spending money at the mall each week just so I could have what “all the cool kids” were wearing. If my shoes weren’t too small or my jeans were not complete high waters, and if it wasn’t on sale at the department store in the mall, I was sh*t out of luck. So I worked with what I had in my – and my mom’s — closet.

My daughters, however, have things a little bit different than I do. Seeing as how what goes around has come back around and '90s fashion is now cool, I decided to give in to nostalgia and attempted to dress my 4-year-old the way I used to dress in the ’90s.

Since this experiment focused on dressing how I dressed in the ’90s, it meant I worked with whatever was available since that’s what my fashion was based on back then. I didn't go out looking for '90s-specific clothes, but I did everything I could to use what we had in the closet and give it an overall '90s vibe. I let my daughter know that we were going to play a “really fun dress-up game” for a few days because I wanted to see if she'd like wearing the clothes I used to wear when I was a kid. She looked at me like I was boring her to death, but agreed to be my little model. Let the ’90s flashback commence!

If there was anything I remembered about my childhood, it was the bright colors. My mom would dress me in bright floral prints and a super-high side ponytail. It was like having one foot in the ’80s and the other in the ’90s. Finding something bright in my daughter’s closet was not a problem since she loves neon everything, but getting her to agree to put her hair in a high ponytail was another story. Luckily she was so tired that morning that she didn’t give me any push back and I was able to do her hair before heading off to work.

My husband took her to school and said one of her school friend’s told her, “I like your dress,” when she got to class. She was really excited about the dress but not so much the leggings.

Workout gear was pretty hot back in the ’90s. I remember wishing my PE outfit looked more like Kelly and Jesse Spano’s from Saved by The Bell. I mean, cute shirts, bright white shoes, and a leotard every now and then? Sold! Day two's outfit proved that it was much much easier selling my daughter on her ’90s-inspired ballet gear than it was on the super brights from day one. And she loved her hair in a side ponytail, especially because her little school friends said they wanted their hair like that after seeing her totally rock it. She did ask me to put a tutu on her right before class and the leg warmers miraculously stayed on for half the class. Not '90s, but close enough. (Plus, it prevented a toddler tantrum.)

OK, confession: I was never into the alternative rock scene back in the day because I was all about TLC, Backstreet Boys, 'N Sync, Britney Spears, and Brandy. That said, I did know about Nirvana and Courtney Love and I really, really wished I could have rocked the flannel and Dr. Martens. My husband, however, who was part of the grunge scene, was super proud when our toddler rocked her Nirvana shirt. Of course, the boots or some Vans would have completed the outfit, but like me, she does not own either. So we went with her black boots and she agreed to a messy bun but asked to pick out a necklace by herself. Everyone at the party we attended complimented her either on her shirt or the Moana-inspired necklace.

I'll let you all guess whether or not the kids appreciated the necklace or the Nirvana top more.

Sticking with the alternative style of dress, I gave my daughter two outfit options for school on Monday: flannel or a baby doll dress. She picked the lacy baby doll dress, which totally made me think of Courtney Love and her shorter-than-short dresses. (Plus, remember when baby doll dresses were everything?) I added shorts to her overall look because she's a toddler, and I was wholly surprised when my little girl didn’t want to wear a tiara.

Instead, she wanted her hair “wavy and down” so I rolled with it. Her teacher complimented her outfit and my daughter wore it all day, without any complaints.

Cords, overalls, and matching sets were around "back in the day" (can't believe I'm at a point where I'm old enough to say that) – and I was all about the overalls. I literally had three pairs and thought I looked so cute when I was able to sneakily roll up my shirt to show off just a little bit of skin, just like all the pop stars at that time. My toddler was not feeling the overall-floral outfit I picked out for her along with some bright pink frilly socks. She didn’t like the black shoes because they "weren’t glittery enough" and only smiled when I promised she could have a side ponytail.

I loved giving my daughter the freedom to choose what she wanted to wear. So much of fabulous '90s fashion focused on wearing what you wanted because it made you feel fabulous, and I loved knowing my daughter was finding her own ways to recreate that.

My mom, on the other hand, loved this outfit because it reminded her of the bright orange overalls I used to wear to school — fold-over socks included. The girls who work at the childcare center at the gym said she looked adorable, which I completely agreed with. My daughter on the other hand? Not so much.

We went all out on day six and my daughter loved accessorizing this outfit. She was pouting the entire time I was buttoning up the flannel dress that reminded me so much of the '90s I wanted to jump back in time. “It looks like a boy,” she said when I asked why she didn’t like the brown-and-black flannel dress I paired with a beanie a la Angela from My So Called Life. But then I showed her the choker, the knee highs (I just used a pair of my socks), and the boots and she got excited. This outfit was everything to her!

My husband thought she looked cute but too mature for her age, and unfortunately it was a rainy day so she spent most of the day indoors. However, she kept the outfit on the entire day and by the end of the night, when we made a trip to Trader Joe's, she still had it on — only by then, we'd added pants since it was cold. No comments came from strangers or anyone else, but she got plenty of smiles from fellow shoppers.

On the last day of the experiment I let my daughter decide what to wear. I laid out two options: a romper with a belt, or jeans with a white shirt with a sweater to wear around her waist. I also suggested a little skort that looks so cute on her, but she said nixed it right away and opted for the romper. This outfit reminded me of the loose floral shorts that Kelly used to wear on 90210. It wasn't a direct tie to the '90s, but it was close enough. Plus, I loved giving my daughter the freedom to choose what she wanted to wear. So much of fabulous '90s fashion focused on wearing what you wanted because it made you feel fabulous, and I loved knowing my daughter was finding her own ways to recreate that.

All in all, she loved the belt but didn’t like the low side ponytail and bangs. By the time we picked her up from school, her hair was down and the belt was off.

What Was It About The '90s I Wanted To Give My Daughter?

I’m sure my daughter would have had more fun playing with all the toys I had — or rather, wasn’t allowed to have — back in the ’90s, but she did enjoy dressing up in outfits that were accessorized with jewelry and beanies since she normally doesn’t wear them. We also discovered she likes her hair in a high side ponytail (most of the time) and also in a messy bun. I personally really enjoyed stepping back in time and dressing my daughter in those once-popular trends that are all the rage again, but more than anything, it was nice spending time with her each night going over each outfit and discussing what she liked about what we'd picked. I think she just may pull a couple of those ‘’90s outfits out of her closet every now and again – I know I would.