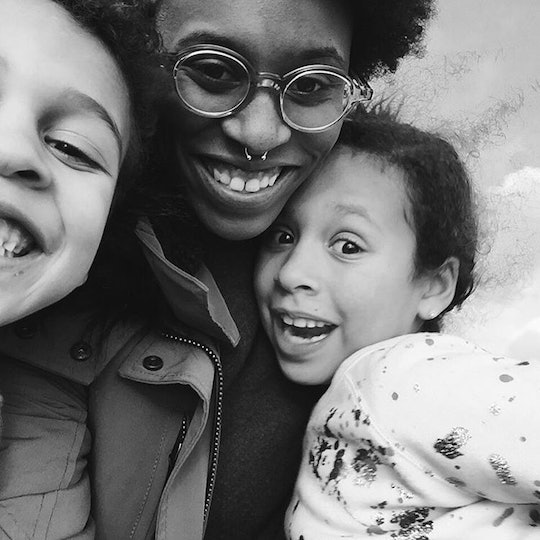 I Took My Kids Out Of My Tinder Profile, & This Is What Happened To My Matches

I've really enjoyed using Tinder. It’s how I’ve met some of my closest friends, and it’s how I met my partner last year. Of course I have Tinder horror stories just like anyone else, but for the most part my experiences with the dating app have been positive. I've always been honest in the About Me section of my profile. I'm not one for keeping secrets or misleading potential matches, but I wondered what would happen if I didn't explicitly say I was a parent. Kids can be a deal breaker for people for any number of reasons, and I was honestly curious how my matches would change because of my status as a parent. I decided to do my little experiment two ways: I spent a week with my kids front and center in my profile picture, and then I took my kids out. All in the name of science — kind of.

I started using the app last year when I first separated from my husband. I had no idea what dating as an almost-divorced mother of two would be like. I remember stressing over what I should put in my profile, if I was sharing too much, or not enough. To go one step further, I'd actually never even dated as an adult; I got married when I was 20. In lots of ways, I feel like the only 27 year old who has no idea how to go about dating and meeting other single people. So when I downloaded Tinder, I jumped wholly into it and I loved it instantly.

Something I never paid attention to while using the app, though, was the difference in my matches depending on my photos, particularly the images that included my children. I’m aware that some people purposefully leave their children out of their profiles, but I always thought that seemed dishonest. My children are such a large part of my life, and I want to talk about them. They're also a huge part of the way I'd describe myself, and it's always been important to me that anyone I’m dating is not just OK with my kids, but happy with them.

Because I'm in an open relationship, I still tend to use Tinder here and there. I wanted to see how my matches differed when I used images of me with my kids, and without. I decided I'd keep each profile picture "live" for a week while keeping track of my matches. At the end of the two-week timeframe, I'd compare my results.

Going into it, I'll be honest: I didn't really know what to expect. I didn't want to mislead or "lie" to anyone (but it didn't really feel like lying), but I was also curious to see how my matches would be affected. Were people more likely to swipe if I had kids? Would they skip? Or were people interested in the total package?

Week 1: My Tinder Profile With Kids

I thought starting off with kids in the photos would be a good jumping-off point. Plus, my current profile already had a photo of me with the kids so that meant I wouldn't have to change anything. (And the picture is probably one of my most favorite photos because I feel like it really embodies who I am as a mother.) I also like what I look like in it! The only altering I did to my profile was add “Mama Wolf,” to my bio, and once that was done, I got straight to swiping. I definitely swiped left more than I swiped right, but then I reminded myself that I was conducting an experiment so I needed to be a lot more generous with my likes.

Monday and Tuesday: Both of these days seemed to be extremely low with matches. I got four total matches by the end of day 2. I wasn’t sure if this was due to me only spending a few minutes at the end of the day swiping, but I wasn’t impressed. Or perhaps they weren’t impressed? Because I definitely didn’t get any messages.

Wednesday and Thursday: I spent more time swiping. I wanted to see whether or not putting more effort into the app would help increase my matches. I logged on when I woke up, when I sat down for lunch, and definitely laid in bed swiping for an embarrassing amount of time. By the end of Thursday, I had 10 new matches. I even had some messages, a few that read, “Hey! Are those your kids in the picture?” I said yes, but the conversation didn't really go very far.

Friday, Saturday, and Sunday: Friday was another slow day for me on Tinder. I even checked it multiple times! I got three matches on Friday. THREE. I definitely began to wonder what had gone wrong: Was I not cool enough? Was it my kids? Should I have tried to continue the conversation from Thursday, even though it tapered off totally on its own? But on Saturday and Sunday, I felt a bit better about myself: 15 new matches came in, but none said anything about my kids.

What was really surprising to me this week was that when I was conscious of the fact that my kids where in my photo with me, I felt like I had something to lose when it came to making connections with potential partners. That's not to say that my kids were hurting my love life (they're not, and they never will), but it was interesting to me how aware I was of their presence on my Tinder profile. Meeting people who already know how important my kids are to me has always been a pillar of my dating life — even more so after my partner and I divorced — and after week one, I was disappointed that I didn't swipe on more people who were interested in getting to know the three of us.

OK, it felt really weird for me to delete the photo of my kids and I. I felt like my profile suddenly went to being entirely about representing this one, limited idea of who I am. I'm not just a mom, but who I am as a mom plays a huge role in my life — and it plays an even larger role in my relationships. Even though I know it was just an online dating profile, it still felt a little uncomfortable for me knowing that my kids were left out of something that's so important to who I am. But I was here for science, so I replaced the photo with a picture of me alone.

Monday and Tuesday: EVERY TIME I SWIPED RIGHT I GOT A MATCH. I completely forgot that I had removed my children's photo from my profile, and was definitely thinking, “Damn! I still got it!” whenever a swipe ended up in a match. I felt like I was the coolest, you guys, and honestly, this is probably how Beyoncé feels being Beyoncé every damn day. Just two days in and I had 20 matches! Once I came down from my Beyoncé-inspired high, I realized that these 20 matches came without notice of my kids, and that hurt.

Wednesday and Thursday: Thinking back to Wednesday of week one, I kinda assumed this Wednesday would follow suit and be low on matches. And I was right. (Is there like a rule that Wednesday is the worst day to online date?) At first, when I wasn’t getting any matches, I panicked, thinking I'd lost my mojo, but I had to remind myself that it was an online dating app, and no one can feel my mojo through my phone, and that I indeed, still had it. By the time Thursday rolled around, I only had five new matches. Part of me was relieved that I'd been low on matches during day three and four of my week two experiment. The relief felt good because it made me realize that people didn't like me "more" or "less" because I did or didn't show off my kids.

Friday, Saturday, and Sunday: To close out this week I thought I’d try Tindering after 9 p.m, a time I thought would be popular for people going on the app … especially if drinking was involved. That’s when I like to venture onto the app myself, so I figured why the hell not. And almost every time I swiped right, I got a match. I told myself that I'd gotten my groove back, even though the fact I was laying in bed eating pizza would suggest otherwise. (Nope, still got it, y'all.) I ended Friday night with 15 new matches before I chose sleep over the bearded men that were all starting to all look alike. Saturday night was especially eventful. Every other swipe seemed to end with a match. It’s crazy how good it made me feel about myself, and as I sipped wine while I did it, I felt invincible. By the end of the night I'd matched with 25 new people. Sunday night I wasn’t as invested as I had been, so I really only got like four new matches. But I had such a great experience the night before, I didn’t even care.

Who's ready for the truth? I wasn't totally shocked that I'd gotten more matches without my kids, but I was absolutely disappointed. My kids are my world, and they're so much a part of who I am. I felt getting to know any potential partner without them knowing or understanding how important my two kids are to me was one big, fat lie. I know this week resulted in more matches, but there wasn't a single person who reached out to me to compliment how cute my kids were or to ask if they were mine (like that guy did from week one). Even if my kids aren't front and center, they're still part of the equation, and I felt like I was fooling everyone who matched with me this week.

There's no way of knowing if these people were looking for someone without kids, but I felt I'd wronged them — and myself — by not sharing that part of me with them. We're a three-part package, and anyone who enters our lives deserves to know that.

Were People Swiping On Me More Without My Kids?

Before I started this experiment I didn’t really believe removing the images with me and my kids would really change the way potential matches responded to my profile. Now, knowing what I know, there’s definitely a significant difference in how many matches I got. People were responding to me differently when they saw my kids photographed with me and when I was in my profile picture solo. I can’t say I was that surprised by that, though. Tinder is mostly used as an app for hooking up, so I sort of understand why seeing a single parent on Tinder might be a turn-off for so people. But then again, it just makes me want to I roll my eyes. Single parents are badasses. Why wouldn’t you want to get down with a person who can raise children, hold down a job, and still find time to get down?

But you know what? I'm going to put my kids back where they belong: front and center in my profile, as much a piece of the puzzle as I am. If my matches plummet, so be it. My kids and I are worth so much more than a swipe.