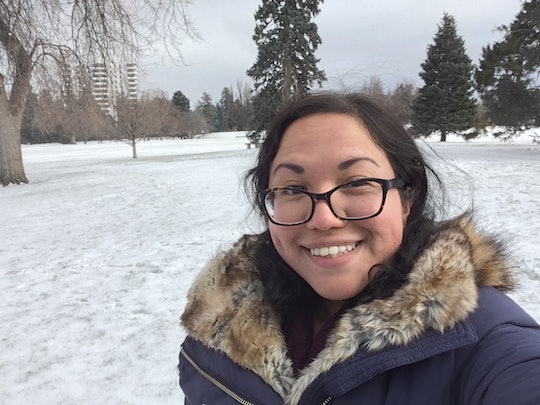 I Want To Adopt, But Not For The Reason You Think

I never wanted kids. As a kid being a mom didn't sound appealing, and as an adult starting a family didn’t vibe well with my lifestyle. I spent four years in a relationship with a man who also showed zero interest in having kids, and I didn't mind. Little did I know that I would become a mother someday, and that my path to motherhood would be more complicated than anything else I’d ever experienced. I definitely didn't know that my very difficult journey would inspire me to adopt and grow the family I eventually, after so much heartache and trauma, eventually had.

Adoption isn’t exactly a new idea for me. In the past, on the rare nights I discussed having children with friends and lovers, I assumed adoption would probably be the best route for me. The world has enough people in the world, and so many of them are still searching for homes. Why not raise one of them, instead? I thought, often out loud. My consideration never really went deeper than that, though. I never thought to look seriously into this particular option, because I never experienced a moment when I considered it the "right time" to adopt. It wasn’t until I had my first baby that I thought seriously about adopting a child.

I got pregnant at 27 with a relatively new boyfriend. We were very much in love and, as a result, decided to try and start a family. Yes, we knew we were still learning about one another, but we also knew that we could handle parenthood, together, and would make great parents. So we got married and moved to a new city in a new apartment with the perfect nursery. It felt like everything was coming together, and whatever was coming our way was something we could absolutely handle.

It was hard enough to keep my own head above water. I knew it wouldn’t be fair to the child at the time when I could barely care for myself.

Five months into my pregnancy, I began to bleed. A week after, I went into preterm labor. Our daughter died eight hours after I brought her into the world, and it changed my life, my partner's life, and the life we were building together, completely. The baby I was going to raise, the family I was about to start, and the life I thought I was was supposed to have, all vanished.

It took a long time for me to even begin to heal on this front. Unlike the Pearson family on This Is Us, a show where a mother loses one of her triplets at birth and then adopts a baby who was coincidentally abandoned at the same hospital, I don’t believe I could have adopted another baby right away. I didn’t have that kind of strength in me. It was hard enough to keep my own head above water. I knew it wouldn’t be fair to the child at the time when I could barely care for myself.

Time passed, and with it, my grief subsided. Two years later, I had another baby, my son, who is now a bright, rambunctious preschooler. He’s everything I dreamed of and more. He fills my days with love and joy and, in his own unique and inspiring way, makes me a better version of myself day in and day out and as he continues to learn, grown, and explore.

Still, I sometimes feel like I have more to give. Sometimes I feel like something's missing. Sometimes I feel like there's a piece of our collective puzzle out there, somewhere, just waiting to come home. And that's why I'm considering adoption. I know another pregnancy would be difficult for me, physically, mentally, and emotionally, but I continue to have the same initial feelings I had prior to having my babies. I keep telling myself the same thing I said, silently and out loud, when I initially discussed adoption, all those years ago:

The world has enough people in the world, and so many of them are still searching for homes. Why not raise one of them, instead?

And now, as a mother who feels like her family isn't entirely complete, my thoughts have shifted. Now, I can't stop from asking myself:

There are so many children out there in need of good homes, in need of people who love and understand them. Why not be the person to give them that?

I’ve always made it my business to be a kind person. I’m a great listener, and I am always doing what I can to help out friends and strangers. I’m teaching my son to be the same way, and would have raised my daughter in the same way, too. I would have taught both my children to be gentle and caring and loving, wise and compassionate and giving. There’s a lot of ugliness in the world, and lately it feels like it’s only getting worse. I know that, at the very least, I could combat all that ugliness by providing a loving, stable, safe environment for a child. I know I would be able to give them the right tools to build a good life for themselves. I know I would give them the love they’d need to give love to others.

I know what it’s like to live at least half-way in the closet most of your life, and it’s not something I would ever want for any child, and certainly not a child living in my home.

As a bi/queer mom, I also think about all the parents who don’t allow their children to simply be who they are. In my household, there is none of that. There would never be any of that. Were any of my children to tell me they were gay or trans or anything, really, I would accept them as is and no questions asked. In fact, not only would I accept them, I would celebrate them. I would teach them to love and accept themselves, as well as others. I know what it’s like to live at least half-way in the closet most of your life, and it’s not something I would ever want for any child, and certainly not a child living in my home.

I’m not rich, and I know adoption is often an expensive option, but my hope is that someday, perhaps soon, I’ll be more financially secure to the point that bringing another child into my home would be something I could do with ease. If I were living an abundant life, why wouldn’t I want to share that with another child? Why wouldn’t I want to give someone who perhaps might have to struggle through their lives the chance to have as many doors open for them as possible?

I’ve always felt that family was extremely important. Sometimes I feel like I am meant be a one and done mom. And if I am, I would be OK with that, too. But I can't shake this feeling that my family isn't complete. Sometimes I find myself thinking about how wonderful it would be for my son to have a sibling, for my husband and I to have another child, and to have that warmth that comes with having more family members in our home.

Nearly all my favorite childhood memories involve my family. To give these same kinds of memories to another child is something that fills my heart with joy. I may not have the daughter I lost anymore, but the capacity to love, and give that love, remains.