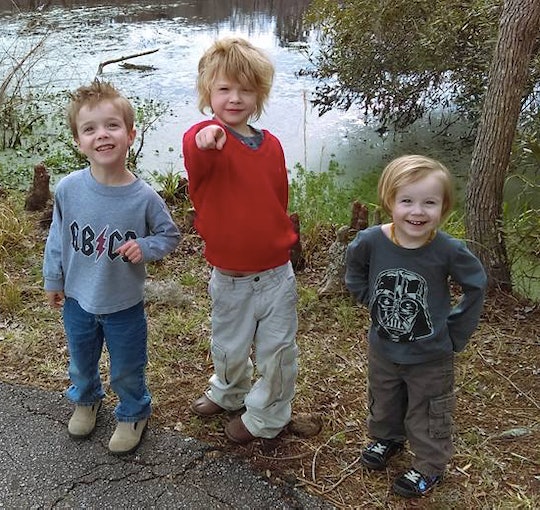 I Won't Raise My 3 Sons To Be Like Brock Turner

Emily Doe’s brutal sexual assault by former Stanford freshman Brock Turner has brought sexual assault into the national consciousness again. It's left mothers in America with a deep responsibility: We must teach our sons not to sexually assault or to rape. I refuse to let my sons grow up to be Brock Turner. With every mention of Turner and his conviction, I'm reminded once again of the dismal statistics: one out of six American women will be sexually assaulted in their lifetimes, according to Rape, Abuse, and Incest National Network (RAINN). One in five women will be raped during their lives, as will one in 71 men, according to the National Sexual Violence Resource Center. Of those eight women, 81 percent of rape and assault victims report PTSD symptoms, 33 percent contemplate suicide, and 13 percent attempt it. However, rape is one of the most underreported crimes: 63 percent of rapes are not reported to police. According to the RAINN, someone is sexually assaulted in America every two minutes.

A national survey of 2,652 men completed in 1991 and reported by the New York Times found that men who rape tend to “have a hostile, adversarial relationship with women in general," and my husband and I believe that attachment parenting helps ensure that our children don’t grow up to have a “hostile, adversarial” relationship with anyone, much less women, who we believe are incredibly important parts of the family unit. It also teaches empathy and the value of the individual. For example, when my sons and I have to pause a hike so that I can breastfeed their little brother, they see that they have to adjust their lives to the lives of others.

We also teach our children bodily autonomy. No one, we tell them, has the right to touch their penis except the doctor, when he’s examining them, and us, when we’re checking them for injuries or helping wash them (when they’re very small). In both cases, the person touching them has to ask for their consent and announce that it’s going to happen. We also teach them the correct names for their body parts. This helps removes the sense of shame that surrounds genitals in our society. Though it may shock to hear a 2 year old say "penis" or "vagina," sexual violence prevention educators believe that kids who are comfortable saying the name of their body parts are less likely to be sexually abused, and if they are, adults are more likely to pick up on it and prosecute it.

We teach our to sons know they are valuable as human beings, as valuable as an adult who has the right to say they don't want to be touched.

That’s not the only way we teach consent, however. No one is allowed to touch my sons without their permission. And if they don’t want to touch or be touched, they don’t have to be. So sorry, Aunt Sue. You can demand all the hugs you want, but if my kids don’t want to hug you, you’re out of luck. And no moaning and making them feel guilty about their choice, either. We will speak up and comment on the coercive nature of that moaning, and tell the moaner it’s not acceptable. We never want our kids to feel like they have to touch anyone, ever. This preserves their bodily autonomy and teaches them self-worth. We teach our to sons know they are valuable as human beings, as valuable as an adult who has the right to say they don't want to be touched. By doing this, we increase their self-esteem and sense of power at a time in their childhoods commonly associated with powerlessness. I want my sons to know that saying "no" is always available to them.

That goes the other way around, too. I make sure my kids know when I’m touched out, and that they act accordingly. If they’re on top of me in a pile, I make them get off. If I don’t want to be touched, I say so. This goes for their brothers, as well: they are not allowed to touch one another if they don’t want to be touched. That means we sometimes have to break up "good touches" (what we call hugs) and "bad touches" (what we call hitting). Any touch unacceptable to the person they’re touching is not OK. Hitting isn’t just bad because it’s objectively wrong; it’s also bad because hitting is touching someone in a way they don’t want to be touched. We use language like, “Do you think he liked that touch? Why not?” This may be the most important part of all. It teaches my sons to see touching from the other person's point of view, and to respect the other person's desires. From a parent's point of view, I believe teaching my sons to respect others' desires is crucial to raising well-behaved children who respect other people. It also teaches them to talk openly about good and bad touching, which I hope will help open the dialogue later for things like rape and consent.

But even in all of these things, we teach our sons to respect women. Not just to listen to mom, although a healthy love and reverence for mom is important. We also make sure they have my sons have as many opportunities to make girl friends as possible. I want them to have friends who are girls who they view as peers, girls whose company they enjoy, and who have things in common with them. We make sure those friendships are two-sided and longterm. We want them to have girl buddies the same way they have boy buddies. In my opinion, viewing women as peers, rather than a species of others, starts early. They need to respect the other half of the human race not only to be whole people, but to move through the world as whole individuals — and part of my job as a mother is to raise whole people. I teach my sons you don't rape or sexually assault people you respect. I teach them, point blank, you don't rape at all. Brock Turner clearly didn't respect Emily Doe when he sexually assaulted her behind a dumpster. I hope my sons will never, ever, see an intoxicated individual as a target instead of a person. Teaching them to respecting women says that even if a woman walks stark naked into a room, they have zero right to touch her without consent.

Teaching consequences is one of the most important parts of our parenting: it assures our sons understand the world around them and how it works. They understand their behaviors, whether right or wrong, come with consequences.

Another pillar of our parenting choices includes teaching our sons how to fail. Failing starts early. We make sure our kids have the chances to fail, and that when they fail, they experience the natural consequences of their failures. Anyone can see from Brock Turner’s dad’s letter that neither father nor son understands consequences of their actions, or even why those actions were wrong. Teaching consequences is one of the most important parts of our parenting: it assures our sons understand the world around them and how it works. They understand their behaviors, whether right or wrong, come with consequences. When my sons leave their bows and arrows out in the yard, they get ruined, and we don’t buy new ones. When they keep hitting their brother, they go to another room, because their brother isn’t safe around them. If they leave their markers uncapped, those markers go dry — and I take the other ones, because they aren’t ready to have them. In these small ways, they start to understand the idea of natural consequences. And I believe those who understand the consequences of their actions, and that every action comes with a consequence, both good and bad, don’t rape.

My husband does his part to assure our children grow up to understand that sexual assault, rape, and claiming authority over another's body are wrong. While he does all the things mentioned above — uses the world "penis," teaches natural consequences — most importantly, my husband reinforces the need to respect women. When he sees the kids piled on top of me, he tells them to get off, because "Mama doesn't like that." He makes sure they speak to me respectfully, in polite tones of voice, with polite words. He does the same thing for our mothers, and for other women we encounter. He shows our sons constantly that women are no less deserving of respect than men. By making our sons respect the other half of the human race, my husband teaches them to view women as equals.

One day they'll have more power than I will, and that's simply because I'm a woman. So they must learn now how to be allies rather than adversaries to the women they encounter. Because the courts will always be on the side of my sons and people like them. It's important my boys know why.

In the aftermath of Emily Doe's case, I'm struck even more by my need to ensure I don't raise children who grow up to rape or assault or hurt another person. When my younger son was banging his head against his brother this morning, instead of saying "Stop it," I intentionally said, "Blaise doesn't like the way you're touching him. We don't touch people in ways they don't want to be touched." For me, part of Emily Doe's legacy means being very careful with the way I treat my sons, and putting consent at the forefront of my parenting.

I feel a lot of pressure to teach my sons these things. Not just because sexual assault is wrong, but because my sons are white, middle class, and (so far) cisgender. They're the ones who can get away with it. Their white privilege means they have the most power in society; one day they'll have more power than I will, and that's simply because I'm a woman. So they must learn now how to be allies rather than adversaries to the women they encounter. Because the courts will always be on the side of my sons and people like them. It's important my boys know why.

We raise our sons to be good people. Good people who don’t take advantage of others, who see women as peers worthy of respect. We also embrace an ethic that says all people have value, regardless of their status. You can find that in religion, like we have, or you can find that in a fortune cookie. You can find it in a moral code. But boys grow up to be men. It’s up to us mothers and fathers to teach them now, for the college girls and men of the future, for the women and men yet unborn. We are their first models. We are their moral compasses. And I will do everything I can to teach my sons not to rape.