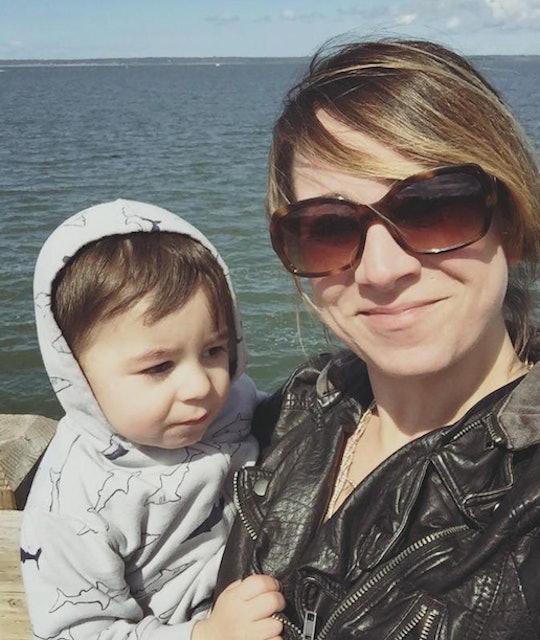 I knew the day would come when I'd have to look at my son and my partner and be forced to contemplate, even resent, their privilege. When I first fell in love with my partner — a white, cisgender male — I knew that his privilege likely provided him a safety net throughout his life, and when I gave birth to our son nearly two years ago, I knew he would, in part, share some of his father's privilege. And as the nation continues to come to terms with the Stanford rape case and the six-month prison sentence for Brock Turner, a cisgender, white male who was found guilty on three counts of sexual assault, I realize the Stanford rape case showed me I can't hide my son's white privilege from him. I've learned I need to talk to him about his own privilege and what that means — not just for him, but for all of us.

As a sexual assault survivor, it's difficult for me to separate the scared victim suffering from PTSD and anxiety, from the strong and determined mother who'll do whatever it takes to ensure that her son will not grow up to be someone like Brock Turner. I want to crawl back into the hole I was barely able to emerge from four years ago after my own sexual assault, but I can't. I want to fear every privileged male who gets away with sexual assault with no more than a slap on the wrists and a lenient sentence from a judge more concerned about their well-being, but I can't. I realize that I have an obligation to myself, to other victims, to my son, to my partner, and to the people we share this planet with, to ensure that my son does not become a man who takes advantage of a woman passed out behind a dumpster, but a man who comes to her aid when he sees an assault taking place and does everything he can to advocate for victims and survivors everywhere.

This case has made clear that I have to look past my own fears and raise my son to understand that not everyone is born white, cisgender, and privileged. And doing that means admitting my own harsh reality: my son was born predominantly white, cisgender, and male. Yet unlike Brock Turner, I plan to teach my son that his privilege gives him absolutely no authority over anyone else's body, regardless of all the ways the world will teach him it does. I have to be strong enough to think of the unthinkable, knowing that if he does abuse his privilege and attempt to control someone else's body for any terrifying reason, I'll be there to hold him accountable and nothing, not even his privilege, will save him.

Admitting my son's inherent privilege means admitting I will not defend him the way Dan A. Turner, Brock Turner's father, blindly defended his son. I will not send out a statement claiming any possible sentence my son would (rightfully) face is a "steep price to pay" for "20 minutes of action." I will not ask a judge to remove the "burden" of legal consequences he may face in light of his actions. My love for my son is endless, but it won't keep me from holding him responsible if he chooses to do something to another's body without their explicit consent.

But a rapist doesn't look one specific way. A sexual abuser isn't always the jock of the sports team. Sometimes, they're the person who works alongside you, like mine was. So confronting the reality that my son could be something other than the harmless, innocent, perfect little boy I see him as right now is terrifying, but one I need to consider.

I want to be fair to the two men I've decided to share my life with, but I also don't ever want to lose sight of the social power they hold, one so many will never have solely because our culture arbitrarily decided they're somehow more worthy. I don't want to blame my partner, who's aware of his privilege, thankful for it, and uses it to be an advocate, for the callousness of others, yet I want to ensure that the reality of that privilege, and how it affects our son, is constantly contemplated and re-evaluated in our home. I want to do everything we can as parents to ensure that we don't contribute to a rape culture where one in five women will be sexually assaulted during their lifetime.

I'd honestly rather focus on the fact that my son is just now learning how to use the toilet and says "I love you" without prompt and still enjoys falling asleep in my arms, but I didn't become a mother to just enjoy the easy days of carefree conversations and play times.

As a Hispanic mother who is raising a Hispanic son, it's difficult for me to assume my son will have the same privileges that Brock Turner had and clearly took advantage of. But my son looks like a predominantly white male despite his Puerto Rican heritage, so I know I'd be doing him a disservice by not making him aware of the privilege he holds.

At the same time, I don't want to strip my son of his identity by focusing on his appearance. I don't want to make him feel like less of a Hispanic individual because the color of his skin is not olive enough or dark enough. I don't want to white-wash my son for fear he could be as blinded by his privilege as Brock Turner so clearly is. But I do need him to know what it means to look white in our society.

As a woman who knows what it's like to be catcalled on the sidewalk, discriminated against for being pregnant, and sexually assaulted at the hands of a white, male coworker, I need to have these difficult conversations with myself and my partner and, one day, my son. It's part of my job. I believe continuing to think that our kids "could never" only nourishes rape culture, blind privilege, and the blatant misogyny that contributes to sexual assaults on college campuses and around the country.

As a survivor, I need to ensure my partner leads by example. Even though he's endured much in his life, he's still well aware that ability to endure has been vastly aided by his social status. I admire his ability to see the advantages he has, the advantages so many cannot or refuse to acknowledge, and I can only hope this level of conscious introspection is passed down to our son.

Because, honestly, I knew this day would come. I knew there would be a day when my past sexual assault would intersect with my son's future. I knew I'd have to reason with my son's inherent privilege, because someone else used that very privilege to hurt me. I'd honestly rather focus on the fact that my son is just now learning how to use the toilet and says "I love you" without prompt and still enjoys falling asleep in my arms, but I didn't become a mother to just enjoy the easy days of carefree conversations and play times. I became a mother so I could raise an individual who could benefit society. I became a mother to raise a child who would be better than the man who sexually assaulted me.

So I won't ever force him to hug someone he doesn't want to hug, but I won't allow him to hug someone who doesn't want to hug him, either. I'll be the first to talk to my son about consent at a very young age so that he's well aware that he's entitled to no one's body but his own. I'll constantly use the correct, anatomical names for all body parts so that he's raised sex positive and unafraid to talk about sex in a healthy and unapologetic way. I'll make sure he knows sex is not an inherently bad thing, but a healthy thing everyone should be able to enjoy so long as it's safe and consensual. I'll constantly remind him sex is something both women and men enjoy, and under no circumstances does his identity somehow leave him with an unalienable right to have sex with another person wherever and whenever he wants.

I will raise my son to be a man who is aware of his privilege, to be someone who will use it to advocate and stand up for others. Though the fear and what ifs are crippling, I can't fail. I won't. Women deserve better. So does my son.

More Like This
The Covid Vaccine For Kids Under 5 Has Been Sent To The FDA For Review
30 Easy Summer Activities For Kids That Work Rain Or Shine
Easy Fourth Of July Crafts For Preschoolers
Ginger Zee Had A Perfect Response After A Troll Asked Her "Who's Raising Your Kids?"