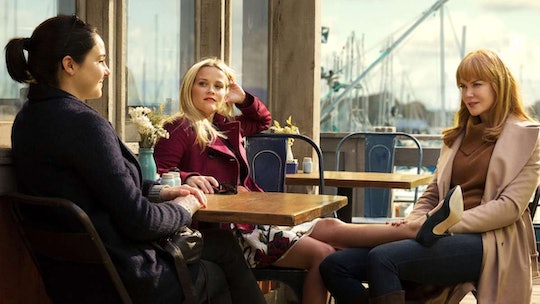 If You're A Mom, You're Part Of The Whisper Network & You Probably Don't Even Know It

This was the year the allegations finally stuck. On October 5, in a triumph of what was dubbed Rose's Army (McGowan), or a secret whisper network, The New York Times published a damning exposé that revealed decades of sexual harassment and assault allegations against Hollywood producer Harvey Weinstein. That article seemed to serve as a Pandora’s Box of sorts, opening the floodgates for so many more people to come forward with their own stories of harassment and assault, both in Hollywood and beyond. Shortly after the initial Weinstein story broke, the hashtag #MeToo started trending on social media, where survivors shared their experiences to shed light on the prevalence of sexual misconduct within our society. At the same time, the chorus grew of people who admitted: "I knew." Women, in particular, weren't surprised. And moms least of all. They'd been warning each other for years.

One of the narratives to emerge from the undoing of several powerful men has been the slow-burn power and success of these whisper networks — the secret, hushed conversations of women who warned one another about predators within their industry or social circles. And there's not just one form that a whisper network can take; it exists in many different mediums. A week after The Times published their investigation about Weinstein, BuzzFeed exposed the “Shitty Media Men” list — a spreadsheet that had been passed between people within the media industry that named men who had been accused of sexual harassment, creepy dating behavior, and even assault or rape.

The Sh*tty Media Men spreadsheet was an explicit record of what women have been doing for decades, centuries even: giving one another the heads up about sh*tty men, and sh*tty situations in general. Revolutionary it was not, and if anyone knows this best, it’s the moms of the world.

When the most personal and intimate thing that’s happened to you has also happened to millions of other women, it suddenly paves way to conversations that you never thought you'd have.

Moms are the OG whisper-network ninjas, in part due to the fact that nothing prepares you for motherhood except actually going through it. And once you’ve gone through it, or even part of it, you’ve developed so many tricks, tips, and hacks that you have no choice but to pass on to others — it almost feels obligatory. It starts during pregnancy, when other women prod able-bodied men to give up their seat to you on the bus, and shoot you sympathetic eyes that say, "Don't I know it." In a very small way, they are inducting you into their private network — alluding to the fact women have each other's backs.

Before I became a mom, I rarely took part in online conversations or message boards, but in the few months that my daughter has been alive, I’ve spent more time on those type of sites than I ever expected. Crossing the bridge into parenthood feels something akin to joining a secret society; suddenly, I’m able to jump into conversations that I didn’t understand just a few weeks ago.

And the thing about those conversations is that they’re not always easy to have. It might be hard to admit to your partner or family that breastfeeding is hard AF and you fantasize about quitting every day, but it’s the easiest thing in the world to type it into a message board filled with other moms who will inherently understand. It's crucial because moms receive nowhere near the support they need. The whisper network is probably the best way to advocate for better health-care when our postpartum ailments go undiagnosed and childbirth injuries linger for years. We spread the word about the good OB, the magical lactation consultant, and, later, the houses where teen parties happen, the teachers to be wary of.

'This almost happened to me,' we say. 'Here’s how to make sure it doesn’t happen to you.'

And when one of us learns a lesson the hard way, teetering on the verge of a tragedy, it is sheer instinct to warn other moms of the same. “This almost happened to me,” we say. “Here’s how to make sure it doesn’t happen to you.” Mothers know how goddamn dangerous the world is. After all, they've likely gone through childbirth.

The very act of becoming a parent is a wild ride of emotions, culminating in a physical trauma (yes, even though it can be exhilarating and beautiful, childbirth can be traumatic at the same time). Going through that experience changes you in ways beyond the visible stretch marks or that stubborn linea nigra that takes forever to go away. With that in mind, it makes sense that women choose to reach out to one another, that they seek solace in those who have walked that same journey. It is human nature to want to find common ground, and when the most personal and intimate thing that’s happened to you has also happened to millions of other women, it suddenly paves way to conversations that you never thought you'd have.

It’s instinctual; when something bad happens to our children, one of the first things we think is: “How can we make sure no one else ever has to experience this, ever?”

Moreover, when you become a parent, your priorities inevitably shift to protecting your child. Victims often internalize the blame for what happened to them, but we are truly gutted by the simple innocence of our own children. When something concerns them, we have no issues sounding the alarm. To that end, moms are often quick to tip each other off to surprising dangers, or unexpected risks. Just think about how many (sometimes graphic) photos go viral when a kid has an unpredictable reaction to a product or gets hurt from a device that’s supposed to be “safe.” It’s instinctual; when something bad happens to our children, one of the first things we think is: “How can we make sure no one else ever has to experience this, ever?”

And, in a way, this is what mommy-shaming is often about as well. That instinct to point out a danger or risk can sometimes teeter in the wrong direction and come across as judgmental or hostile. And while there are certain things that don’t merit any sort of shaming (like a woman’s personal decision to breastfeed or formula-feed), it’s possible that those car seat-shaming moms are just trying to look out for each other too.

Moms are the champions of the whisper network, because we have to be. It’s instinctive, but it’s also necessary in a lot of ways in order to move forward as a collective parenting society. After all, part of how we learn about things that are dangerous is through our fellow parents who have been through the trenches themselves and learned the hard way. If it weren’t for those conversations, we’d all still be putting bumpers in our cribs or letting our kids play with toys that pose serious hazards.

The mom whisper network gives you the comfort of knowing that, no matter what, you’re never really alone because so many other women have done this too — and survived. And considering parenthood is not always rainbows and sunshine, it helps to be reminded on those darker days that other people simply understand. That understanding and common ground is the most valuable thing in the world.