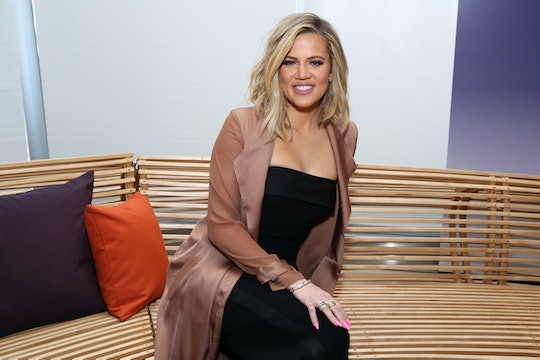 It's that time of year again. Hundreds of entertainers, fashion icons, and media personalities will descend on the Metropolitan Museum of Art in New York City in out-of-this-world garb to celebrate the best in fashion innovation. Celebrities like Kim Kardashian have been bragging about going to this year's Met Gala on social media. But other attendees of yore have remained mum, leaving fans wondering who, exactly, is showing up. One question they have: Is Khloé Kardashian attending the 2018 Met Gala? The new mom was spotted in Cleveland, Ohio, this weekend at a NBA playoff game, but it's unclear if she's made her way east for the annual fashion ball. Romper has reached out to Kardashian's representative for comment but has yet to hear back at the time of publication.

With the exception of Kim, it's uncertain which members of the Kardashian-Jenner clan will make an appearance at Monday night's Met Gala, which is being hosted by Rihanna — who, can I just say, is an all-around Goddess and made for this role. It's possible that Kendall Jenner may show up for the glitzy event in Upper Manhattan on Monday, according to Refinery29. But that's speculation at the moment. Same goes for new mom Kylie Jenner, who was photographed by paparazzi this weekend in New York, R29 reported.

As for big sister Khloé, it's a toss up, but the odds are she won't be in town for the 2018 Met Gala. After all, the Keeping Up With The Kardashians star was seen at a Cleveland Cavaliers game on Saturday, supporting her NBA player boyfriend, Tristan Thompson, according to AOL. And, on Sunday, paparazzi caught Kardashian walking through a park in Cleveland while pushing her newborn daughter True Thompson in a stroller, according to Seventeen. True's stroller is covered with a blanket, according to pictures published by The Daily Mail, so paparazzi were unable to snap a photograph of the baby girl.

It's not surprising that Kardashian may want to lay low in Cleveland, where she lives with True and Thompson, instead of flying all the way to New York City for the 2018 Met Gala. Not only did the 33-year-old Good American co-founder give birth to True less than a month ago, she also recently had to contend with cheating accusations lobbed against Thompson days before she went into labor with her first child. Never mind all of the online criticism she is facing from ridiculously judgmental people for appearing to have forgiven and continue to support Thompson despite his alleged infidelity. (Thompson rep didn't immediately respond to Romper's request for comment.)

And there's another member of the Kardashian family people won't see at the 2018 Met Gala: Kanye West. A source told US Weekly that West, who has been in the news a lot lately, is "definitely not going" to the event, which means Kim Kardashian will have the spotlight all to herself on the red carpet at the Met Gala on Monday evening.

Experts do expect the 2018 Met Gala to be an exceptionally stunning visual event as this year's theme is "Heavenly Bodies: Fashion and the Catholic Imagination," according to Vogue. As someone who was raised Catholic, but no longer practices, I can say that attendees will have a lot of ornate, shimmery, and celestial imagery to reference — and not just from the fashion of the Vacation, but through the architecture of the churches and symbols of idolatry. Plus, the fact that "Heavenly Bodies" could turn controversial the second the gala starts is highly probable, which makes this year's event even more of a must-watch.