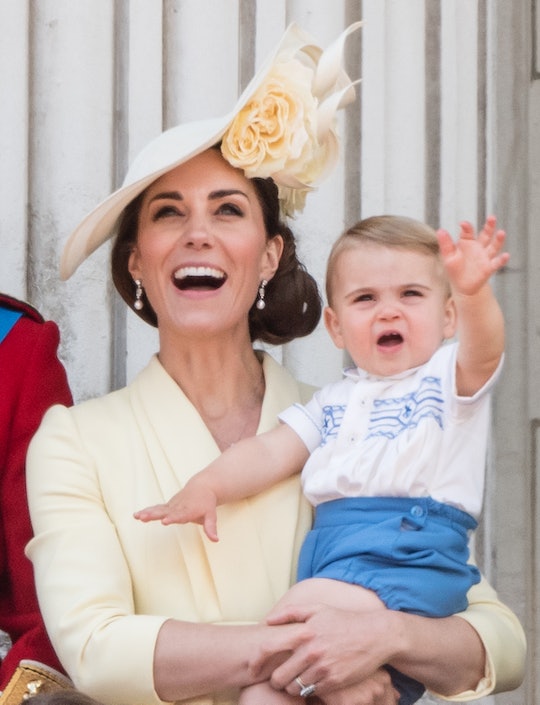 Kate Middleton has been spending the past week or so of royal duties in the company of kids, and honestly she's never looked happier. The mom of three always seems the most at ease when she's around little ones, perhaps because it keeps her own kids close to mind for her. Like during a recent visit to the Evelina Children's Hospital in London, when Middleton shared a precious little detail about Prince Louis that felt extra adorable.

The Duke and Duchess of Cambridge are, of course, parents to three sweet royal kids, 6-year-old Prince George, 4-year-old Princess Charlotte, and 21-month-old Prince Louis. While they tend to do their best to keep their children out of the spotlight as much as possible, they both have a tendency to share little stories and details about their kids simply because they clearly adore them. So it should come as no surprise that Middleton brought up her youngest child, little Prince Louis, during her visit to Evelina Children's Hospital on Wednesday to take part in an art therapy session for young patients.

When she met little Rose Parker and her mother Emily, as a video from the Daily Mail's Rebecca English details, Middleton gently reached out to tickle the little girl's knee and noted that her own little boy Prince Louis "also has tickly knees."

I wish I could explain to you why this brings me such joy but alas, I cannot.

Middleton has been opening up about Prince Louis quite a lot during recent royal outings, perhaps because he is her youngest and potentially her last baby, if Prince William has anything to say about it. She recently told a group of royal fans that Prince Louis is starting to balance and is also speaking pretty clearly, to the point where he reportedly said proudly to his mother, "Mummy I'm balancing," as Hello! Magazine reported.

And just before the holidays Middleton was visiting a Christmas tree farm with some school children when one enthusiastic little boy reminded her of her "little Louis," who she said follows her everywhere and loves to say "Me! Me!" all the time.

Kate Middleton seems to really enjoy all of the daily sweet moments of motherhood and is really paying attention to them. Like having a little boy with ticklish knees, for example. He won't always be the same sweet toddler, and she's clearly going to enjoy it while it lasts.