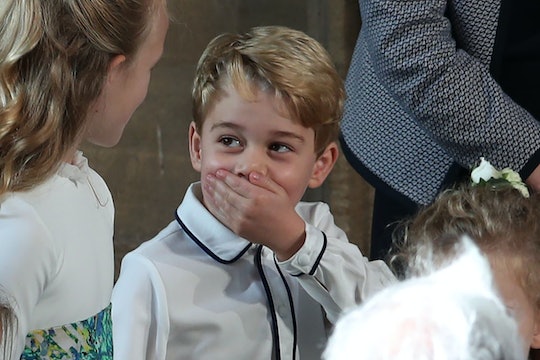 Being a future king is not all crowns and fancy shorts, especially if you're the son of the Duchess of Cambridge. Indeed, one of Kate Middleton's new photos of Prince George for his birthday will look so familiar to any parent raising a 7-year-old boy and it's truly refreshing to know the royals are kinda, sorta regular just like us.

This week, Prince George turned one year older and, as usual, his parents shared some new photos of their son in honor of his birthday on social media. Both photos were taken by his mother, who is a seriously talented photographer, and featured Prince George grinning away in the great outdoors, presumably on the grounds of the family's country home of Anmer Hall in Norfolk County as they have been living there throughout the pandemic, as Town & Country reported.

In one photo, Prince George is wearing a camouflage-print shirt and looking just like his dad Prince William at the same age, I might add. The other photo features Prince George smiling ear to ear and wearing a green polo shirt. But here's the cutest part; as Hello! Magazine reported, if you look closely you'll see his shirt has a broken button. In an official royal photo. I've never felt closer to Kate Middleton than I do right now.

The green cotton polo shirt Prince George is wearing is for sale at Mango for around $15, so nobody panic about the button. Also Middleton is famous for dressing her kids in hand-me-downs, with Prince George's 5-year-old sister Princess Charlotte wearing his old sweaters and 2-year-old Prince Louis wearing clothing from both of his older siblings. The kids have even been known to wear clothes from Prince William and uncle Prince Harry when they were little, so they get loads of use out of their clothes.

Middleton might be a duchess and mom to a future king, but she really does appear to want her kids to just be regular, messy kids whenever possible. When Prince Louis turned 2 earlier this year, she shared the most adorable photo of him covered in paint from finger painting to celebrate. And for Prince William's birthday in June, the Cambridge family shared a photo of him wrestling with his three kids on the grass, all of them laughing.

In fact, I could be mistaken, but it looks as though Prince George might be wearing the very same green cotton polo shirt in that photo.

Kate Middleton's laid-back approach to her kids is pretty fantastic. And maybe even a gentle reminder to all parents to stop sweating the small stuff. After all, a broken button is really no big deal.