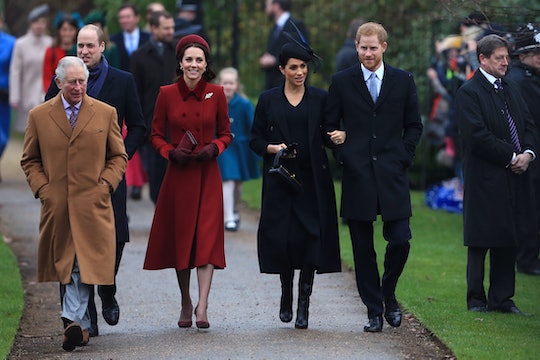 From weddings to births to milestone birthdays, this has been quite the year for the British royal family. And now as 2018 draws to a close, Kensington Palace is capitalizing on the memories of the past 365 days. The palace shared a sweet video of William, Kate, Harry, and Meghan's greatest moments of 2018, and they're definitely worth reminiscing over.

On Saturday, Kensington Palace's official Twitter account tweeted out the video. "Here are some of our favourite moments from 2018 — thank you to everyone who made this year so special," the caption read. "See you in 2019!"

The three-minute clip is a montage of footage of Prince William and Kate Middleton, the Duke and Duchess of Cambridge, and Prince Harry and Meghan Markle, the Duke and Duchess of Sussex, volunteering with children, making speeches, visiting other countries, making public appearances, greeting supporters, and more. It's arranged in chronological order by month, so once it hits April, things start to get exciting. There's a shot of William and Kate on the steps of the Lindo Wing holding Prince Louis of Cambridge, just hours after he was born, on April 23. Then in May, the video shows a few clips from Harry and Meghan's wedding day — the couple riding in the carriage, and their kiss on the steps.

Once the video gets to June, there's footage of that iconic moment in which Meghan whispered something in the Queen's ear during their June trip together, prompting the monarch to giggle.

There are also a few shots from Trooping the Colour in June, aka the annual birthday parade in honor of the sovereign, Queen Elizabeth II.

In July, Prince Louis was christened, and the video shows a few sweet shots of the family arriving at the church with the baby in Kate's arms.

Unfortunately, Princess Eugenie of York's October wedding to Jack Brooksbank did not make the royal cut. Sure, the video is supposed to be focused on Kate, Will, Meghan, and Harry, but they all attended the wedding, so it seems a bit odd that Eugenie's big day was not a 2018 highlight for the foursome — or rather, for whoever made this video. Additionally, Meghan's announcement that she was pregnant, which came shortly after Eugenie's wedding, also did not make it into the video.

Come November, the royal family posed for a set of gorgeous photos in honor of Charles, Prince of Wales' 70th birthday, and one of the stills was included in the video.

One more thing noticeably absent from the favorite moments video was the royal family's Christmas celebration. Luckily for those wondering how the royals spent the holiday, the royal family's official Twitter account shared a few hints. On Christmas Day, the account tweeted two photos of the Queen.

"The Queen attended the Christmas morning service today at St. Mary Magdalene Church in Sandringham, Norfolk," the Royal Family account captioned the shots. It also posted photos of a slew of other royals filing into church on Christmas, including Kate, Will, Harry, Meghan, Charles, Eugenie, Jack, and Princess Beatrice of York. "Her Majesty was joined by several members of the Royal Family," read the caption. "Thank you to everyone who came to say hello – and Merry Christmas!"