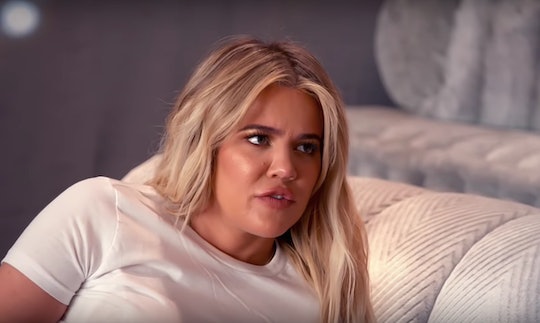 Khloé Kardashian Tweeted About This New Bikini Pic, But She Shouldn't Have Had To

It's safe to say that the entire world knows how important fitness is to Khloé Kardashian, creator of Revenge Body. While she and her sisters make healthy living look easy, it's always good to remember that the KarJenner sisters are under extreme pressure to look a certain way, lest anyone point out a misplaced hair or five extra pounds around their waist. Because the world can be a strange place, the sister can also look "too good," which is why it wasn't surprising that Khloé Kardashian "admitted" that a bikini picture was "deceiving" on Twitter the other day.

Instead of being able to enjoy a cute video her sister posted, Kardashian had to assure fans that the post-baby body in the video was nowhere near her goal. And for what seemed like the first time ever, the majority of responses to her tweet were all positive and encouraging. But she shouldn't have had to send the tweet in the first place.

Here's what happened: Over the weekend, Kendall Jenner posted an Instagram Story of her and Khloé lounging by a pool. From her own perch on a lounge chair, she filmed her sister laying down looking at her phone, looking pretty comfortable in her bikini. Because the focus on Kardashian largely centers around what her body looks like, the new mom took to Twitter to "explain" that her body looked a certain way in the video.

She assured people that it was all due to Jenner's photography skills that she looked "good," tweeting:

And I’m just seeing that Kendall posted a video of me in a bikini… Thank God she knows her angles LOL cuz I do not look like I did in that video LOL laying down is a game changer. I had an hour to hang with Kenny while True was napping.

There's a lot going on in that tweet to her followers and it's all a little troubling. To start, our society puts a lot of pressure on women to have a certain body type, especially new moms. It comes at women both ways. Either they should "bounce back" after giving birth or "learn to love" their new body. Those sentiments might be well intentioned, but they're also just ways to police how a woman looks and feels about her bod. There's no winning this postpartum body game.

Kardashian has been more than open about getting back to the gym as soon as she could after True's birth. Even when she was still pregnant, she talked about missing her workouts. The pressure is real for "regular" moms, so the pressure for someone with Kardashian's celeb status must be excruciating. Khloé is obviously feeling like all eyes on her, her body, and her parenting philosophy, too.

Her tweet was all about preempting that hate. From people who might scold her for caring "too much" about her body or spending "too much" time on self care, which is another way our society burdens new moms. Not only did Kardashian have to make sure people knew that she wasn't spending every day with her trainer, which by the way, is totally her right, she even had to make an excuse for spending alone time with her sister. Because you just know someone would have berated her on social media for not being with her kid at all times, like they did to Kim and Kanye for going out on a date night. There's really no winning for Kardashian, or any new mom.

For Once, Social Media Was A Safe Space

Still, some people found a way to get a dig or two in. One person wrote that she shouldn't "hide" the fact that she has a nanny and she that she should be proud of being a better mom than "the other two," meaning her sisters. Another lauded her for looking good in a bikini, despite being the "fat sister." Sheesh, right?

In any case, Kardashian was smart to get out ahead of the haters. And also show her cards a bit with fans. Feeling self conscious about your body and for being away from your kid — if only for an hour — is totally normal. Moms, even celeb moms, have so much pressure coming at them for so many things. Khloé's tweet is a good reminder that a simple afternoon in the sun doesn't have to be so loaded.