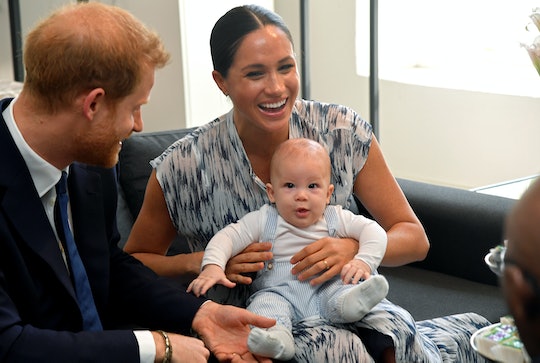 Traveling with a new baby is no an easy task, whether you're royal or not. That's why it was so exciting to see that in the past few weeks, the Duke and Duchess of Sussex's baby boy, Archie, made his royal debut during his parent's royal tour of Southern Africa. International trips with a 5-month-old can get difficult quickly, but it seems Archie's mom has a few tricks up her sleeve. In fact, it sounds like Meghan Markle kept baby Archie happy while traveling with lots of toys and things that reminded him of home.

Archie, who accompanied his parents on a 10-day trip through Southern Africa, was on his best, most adorable behavior. And it probably helps that his parents were prepared. According to royal reporter Omid Scobie, as he shared on his podcast "The HeirPod," Markle and Prince Harry apparently kept their son content by bringing a lot of his belongings with them.

"Meghan and Harry brought all his home comforts with him, I heard there were a lot of toys there that they'd bought with him," Scobie said on his podcast, according to The Sun. "Just all the things that make him feel like he hasn't gone anywhere, because you want to keep him comfortable the whole time."

Scobie went on to share that Markle stayed with her son a lot of the time, particularly while Prince Harry traveled further to other countries. "Meghan stayed with him in South Africa rather than join Prince Harry on his travels," he added, noting that Archie seemed happy and enjoyed looking out over Table Mountain.

Of course, there were a few big moments of the trip that involved Archie. His first official royal appearance meeting Archbishop Desmond Tutu brought a lot of attention, as did the video of Markle and Prince Harry dancing and cooing to Archie as he walked him down a hallway to the meeting.

Another amazing moment was when Markle was surprised with matching jeans for herself and Archie, and decided to return the favor when she donated a bag of Archie's belongings, including many pieces of his clothing to a nonprofit organization working towards a "health HIV-free Africa," which gave the pieces to other families in need.

To wrap up the trip, the Sussexes shared a statement on Instagram. "Their Royal Highness’s journey took them 15,000 miles across southern Africa where they we’re greeted by so many amazing people along the way," they began. "They witnessed the great partnership between the UK and Africa, met local community groups, leaders, and youth and elders, who all imparted knowledge and inspiration."

The post continued to quote Prince Harry in a speech he gave in Tembisa, in reference to Archie. "As I raise my own son, I want to make sure that what I’ve learned here — the value of the natural world, the value of community and friendship — is something that I can pass on to him," he said.

Archie clearly had a fun, educational and history-making trip with his parents, and he looked pretty adorable as he did it. Meghan Markle and Prince Harry are really getting into the swing of this parenting thing, and their travel tips are just the beginning.