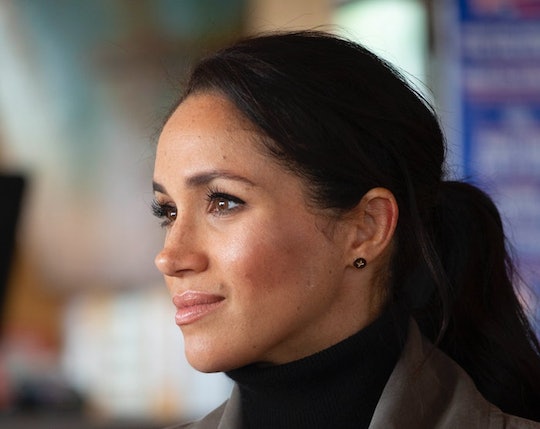 People love to talk about Meghan Markle being a rule breaker in the royal family. She changed the flavor of the wedding cake to something delicious, how dare she! She sometimes crosses her legs! Maybe every once in a while she wants to pick out her own nail polish color instead of Queen Elizabeth's favorite Ballet Slipper Pink shade (I don't know about this one, but I'm just assuming). Here's the truth of it — she absolutely has made history. But, specifically, Meghan Markle's royal pregnancy has been historic for a troubling reason in terms of the stress that's been put on her, and no one seems to be terribly concerned about it.

Meghan Markle has had to completely change her life in the past two years. She went from being an actress living in Toronto, Canada with piles of friends, two dogs, and a cool lifestyle site, The Tig, to being the Duchess of Sussex. Where she had to move to the United Kingdom and reportedly take "duchess lessons" on how to deal with her new life in a fish bowl, all because she fell in love with Prince Harry.

As if that change wasn't stressful enough, she's also had to deal with the added burden of being scrutinized constantly. Being watched and gossiped about. And how exactly does one deal with all of that added stress during pregnancy?

Ever since the day she and Prince Harry announced they were expecting their first child, the Duchess of Sussex has presumably been under an enormous amount of stress. Let's start with her father, shall we?

Thomas Markle, who might be awfully quiet in the tabloids these days but spent months talking to anyone who would listen about his daughter and her husband. Even after Markle reportedly sent him a letter pleading with him to stop, what did he do? Shared her handwritten letter with British tabloid The Mail on Sunday. All while his daughter was expecting her first child... if she did in fact write the letter, the hurt and stress of such a betrayal must have been awful for her.

Then, as The Cut reported, there were the rumors that she and her sister-in-law Kate Middleton were constantly battling and apparently causing friction in the royal family. For months, in fact, there was daily speculation that Markle and Middleton weren't getting along, with people who don't know them at all taking sides and making a meal out of every moment they were or weren't together in public.

All the while, Markle was busy growing a baby inside her. Her very first baby with her new husband, and she hasn't been given any room at all to honor that new precious space.

Markle's incredibly public pregnancy is actually historically unusual for the royal family. As CBC News reported, when Queen Elizabeth II, herself, was pregnant in 1959 with Prince Andrew, she didn't even announce she was expecting. Her husband, Prince Philip, took on some of her royal duties and she was allowed to retreat and take some time to herself, according to CBC News.

Of course, things have changed since then. Kate Middleton's three pregnancies have been written about and speculated over as well, but was it done with quite the same level of cruelty that seems to follow Markle? I think not.

Every time Markle has touched her bump, for instance, the tabloids and people on social media seemed to mock and shame her for it.

Markle had to essentially sneak off to her baby shower in New York in February, as Harper's Bazaar reported, where one can only hope she finally had a moment to relax and enjoy hanging out with her friends from that happy life Before.

And let's not forget this strange and gross rumor... that she's possibly faking her pregnancy. As Fox News reported, trolls have taken to social media to accuse Markle of faking her pregnancy with amazing "proof" like side-by-side bump comparisons with sister-in-law Middleton.

Those are just a few of the tabloid and social media stresses, although I'm happy to report that none other than Oprah Winfrey told CBS This Morning this week that Markle is pretty great about ignoring what is written about her.

But what of the actual stresses of every day life in the palace? When so much was changing during her pregnancy, she was expected to travel quite a lot — making a royal visit to Morocco in February, for instance — which can be difficult for a pregnant woman. Then, as People reported, she and Prince Harry left Kensington Palace and moved to their new home at Frogmore Cottage in Windsor Castle. Plus she had to spend so much time learning a new way of life... it is any wonder that she and Prince Harry shared a press release on Thursday letting royal watchers know they would be keeping the details of their child's birth private for now?

The Daily Mail's Rebecca English shared on Twitter that Kensington Palace announced, "Their Royal Highnesses have taken a personal decision to keep the plans around the arrival of their baby private. The Duke and Duchess look forward to sharing the exciting news with everyone once they have had an opportunity to celebrate privately as a new family."

Stress during pregnancy is obviously terrible for both mother and child. According to the Centers for Disease Control and Prevention, stress can weaken a mother's immune system, cause high blood pressure, and even in some cases cause the baby to be born preterm.

So with all this said, here's hoping that Meghan Markle and Prince Harry will end the cycle now. That they'll be able to enjoy these last days of her pregnancy together in privacy, where she can get accustomed to her new home and prepare for this new role in their lives. Because nothing is more important than her health and that of her child.