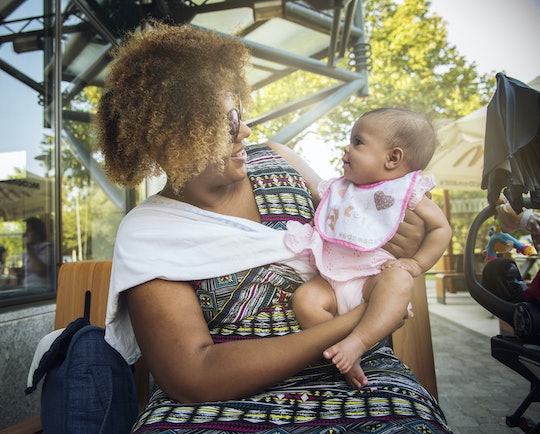 Motherhood Has Changed My Idea Of "Strength," & I'm Better For It

Think of a strong woman. You are, very likely and reasonably, thinking of someone who is tremendously accomplished. Oprah Winfrey, Hillary Clinton, the Williams Sisters, Elizabeth Cady-Stanton. Someone who, in spite of overwhelming adversity or difficulty, not only pulls through but thrives. Of course they're all strong women, but, in many ways, motherhood changed my definition of the word strong. More accurately, made me realize there are many different versions of strength.

When I think of strong women, and I know I am not alone in this, I think of women who have achieved great things, either for themselves or their communities. Strong women are women of action. They don't let narrow minds or tight fists hold them back. Their self-assured determination is unshakeable, and they are able to manifest positive, tangible results in spite of a dearth of resources, time, and support. Strong women are alchemists, Rumpelstiltskins who spin gold from straw. They're not afraid to show their strength even when society at large would rather they be quiet, polite wallflowers.

Growing up, I thought of myself as strong. Looking back, I think this is because I (mercifully and thankfully) had a happy childhood full of people cheering me on and encouraging me to be opinionated and accomplished and unapologetically myself. My strength was encouraged. (I also have one of those personalities in which blind, naive enthusiasm can be mistaken for fearlessness.) While I certainly wasn't Elizabeth Cady-Stanton or Hillary Clinton (and my complete lack of physical strength and coordination assured that I would never be either of the Williams Sisters), I could point to things that had "proven" my strength: graduating college summa cum laude, landing a good job, running successful education programs throughout New York City and the Northeast. I was no shrinking violet. I was strong.

And when I thought about the kind of mom I wanted to be, I wanted to be a strong mother, too. I knew parenting was going to be hard (well, I "knew" but I had no idea), but I was determined, as all strong women are.

My first challenge was coming home from the hospital with my first child. Because strong women are self-assured and capable, but I felt neither confident nor competent. "They're just going to let us waltz out of here with him, huh? Like, they're not going to call any references or check our credentials? We don't have to pass any sort of written or practical test?" Nope. They happily check you out and you're on your own. What I'd already kind of learned in four days at the hospital proved true at home as well: having a newborn was hard.

Because strong women are self-assured and capable, but I felt neither confident nor competent.

At the same time, it could be terrifically boring. My baby slept a lot, but at weird times. You never knew, exactly, how long he'd be zonked out for, even if you could sort of begin to see a pattern. This inability to effectively plan out my day, plus my complete and utter exhaustion, led to absolutely nothing getting done. If you'd asked me what I did in those first few weeks and months, I honestly couldn't answer. Instead, I'd just stare blankly as I mentally ran through my day. There was a diaper change, a bath, a feeding, another diaper change, another diaper change, another feeding... at one point I think I moved the pile of unopened mail from the counter to the table... and that's about all I can adequately recall.

If strong women were confident and accomplished, I was falling short in every way possible. None of what was going on in any way resembled what I recognized to be strong.

The first thing you have to do, as a mom, is recalibrate how you perceive of time. This is largely due to the fact that you'll be sleeping in increments that are legally considered torture under international law. When that happens, the days all sort of bleed together. On top of that, everything you do with or for a baby takes longer that you expect it to. Think of what it takes for you to pack for a weekend-long vacation — that's every outing for a while. Eventually this becomes a quicker, easier process, but it's never quick or easy. It will always take time and effort. Baby-based time is slower, more thoughtful, and, necessarily, less concerned with "accomplishment."

And that's the second thing you have to do: recalibrate how you think about "accomplishment." Because, honestly, sometimes your accomplishment will be simply making it through another damn day. Other than that there will be nothing to show for even after tremendous efforts. That's not to say you have to give up on all your hopes and dreams. But it does mean to treat yourself with some gentleness and grace as you figure out how you're going to go after them while raising a child, which is in and of itself a full-time gig.

Motherhood is a strength of endurance and resistance.

"But!" you might say (and by "you might say" I mean "I actually say all the time even now") "I just saw So-And-So post a picture of a perfectly decorated nursery and how she just organized all her baby's onesies by thread count! THAT is a strong mom. That is a mom who is doing it all in spite of the same hardships. I'm failing."

To which I say (in a mirror, to myself) "Pull yourself together woman. She isn't doing it all. She did that thing. And she was so reasonably excited that she accomplished it that she posted about it on Instagram. She is celebrating her victories, and so you are only seeing her at her best. And even if she were 'doing it all,' it's not a contest. Why don't you celebrate your victories?"

And then you remember that motherhood has reordered time and accomplishment. These things did not look like they once did, which is frustrating because they used to be tangible and measurable and, frankly, easier to muscle your way through. Those feats required strength as I had always thought of it: accomplishment despite challenge. But motherhood can mean a completely different kind of strength. Motherhood is a strength of endurance and resistance. The strength to know what have to do (and not do) to make it through in one piece, and the strength to resist losing yourself in the process.

Motherhood will swallow you if you're not strong, and it's easy to see how and why. We fling ourselves into it, we want to do it well, and, often, we like it. This frequently means putting the needs of our children and others before ours. That can look strong — taking on absolutely everything for someone else — and, in its own way, it is. But it's not sustainable without a cost, and that toll is ourselves as individuals. When we do that all the time, to the detriment of our own interests, limits, and desires, we become a background player in our own lives. It takes courage to pull ourselves back and assert time and space for ourselves. Courage to do things according to your own rules and intuition despite being told there's only "one right way" to be a mom (and it doesn't look like what you're doing). Courage to step away from what would look like an accomplishment to the outside world, but which you know just isn't worth it. Courage to look "selfish."

Strength can absolutely be what I always thought it was — scrappy and indomitable spirit and accomplishment. Indeed, that strength can (and often does) exist right alongside the kind of strength I discovered as a mom. But being strong doesn't require that anyone else recognize it as such (though it's nice when they do). It takes great strength to move forward on your own terms, in your own time, in a way you know is best for you and your children.

More Like This
How Do I Rediscover My Sexuality When I’m Completely Touched Out?
How To Ask Your Partner For Support When You Need It
How To Breastfeed A Baby With A Cleft Lip Or Cleft Palate
Tips To Co-Parent With A Stepparent Successfully