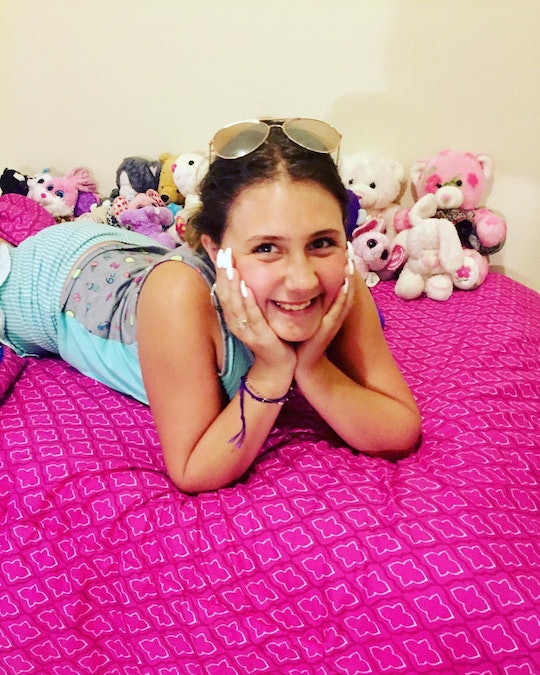 My beautiful 11-year-old daughter was seemingly born with a confidence I've never personally experienced. When she was 3 she carried herself with such self-assurance, it was intoxicating. But as she navigates her way through puberty, her once awe-inspiring poise has waned. Instead of my fearless daughter, I see a frightened little girl struggling to figure out who she is and where she fits in. Just recently my daughter told me she's ugly, and the most heartbreaking thing is that, well, I don't know how to change her mind.

Just acknowleding these negative feelings living inside my daughter's psyche physically hurts. As a parent — as her mother — all I ever want is for my daughter to be happy. So to know that she feels less than, in any capacity let alone in her own skin, means I've clearly done something wrong, right? I've obviously veered her off the joyous, exuberant path she was always on. I just can't figure out where this sharp, sudden change in her demeanor is coming from, or how I have contributed to it in some way, big or small.

I remember what it was like to be my daughter's age. When I was in fifth grade I faced my share of obstacles, too. I endured a broken arm, a troubled home life, and more than enough self-esteem issues. I had started puberty a few years prior and definitely never felt comfortable inside my skin, either. But I can say I've never felt as beautiful as my daughter seemingly felt. She used to proclaim and celebrate her beauty on a regular basis, and her adamance was enviable. I considered her unapologetic self-esteem to be something we should all learn from and aim for, no matter what changes we're going through and no matter what we see when we look in the mirror.

I think this sudden change could be the bi-product of our recent, out-of-state move. When my husband transferred jobs, our family was uprooted and moved more than 1,000 miles south of everything we knew and loved. And while I've had a difficult time of my own, and my son remains generally indifferent in every regard, my daughter's journey to a new state, a new home, and a new school has been riddled with one problem after another. Now she's battling anxiety and depression and, as a result, failing some of her classes in school. She's missing her family and friends back home, and she's dealing with ongoing issues with kids at her new school, including bullying and isolation. And now my strong, defiant girl say she's ugly, and I have to think it's the result of so much change in such a short amount of time.

I should've known that dyeing her hair wasn't going to solve her self-esteem issues. I should've realized that the shoes she begged for and received, or the art class, or the daily affirmations my partner and I tell her constantly, weren't going to be a cure-all, either.

Was moving our family a mistake? Did I cause this internal shift by taking her away from her close family members and dear friends? Was moving her to a new school at such a critical time in her life more hurt than help? How do you weigh the financial needs of your family against the mental and emotional needs of your prepubescent child?

A few months ago, as she started having trouble fitting into her clothes and her face started breaking out with acne, my daughter came home from school asking if she could color her hair. I wasn't really thrilled about the idea, but I knew the ongoing tension between her and her peers had drastically escalated. So, I hoped that allowing her to dye her hair would help her get some of her old confidence back. I silently prayed that it might change her mind about her looks. I wished that something as basic as hair color could remind her that beauty truly is skin deep; that as beautiful as she'd always been, her insides were and always will be far more important and valuable than the way her outward appearance is perceived.

When I watch my daughter poking at her face or sucking her stomach in as she looks in the mirror, I remember how badly I wanted to fit in when I was her age.

I should've known that dyeing her hair wasn't going to solve her self-esteem issues. I should've realize that the shoes she begged for and received, or the art class, or the daily affirmations my partner and I tell her constantly, weren't going to be a cure-all, either.

When I watch my daughter poking at her face or sucking her stomach in as she looks in the mirror, I remember how badly I wanted to fit in when I was her age. I remember that innate longing to be liked and accepted. I remember how desperately I wanted to just feel good about myself. I had such a difficult time accepting myself, though (and still do), so how can I guide my daughter down a path of self-love?

I wasn't born with the same fierceness my daughter was. I have to practice feeling OK with who I am and how I look. Perhaps all that practice will come in handy, though, as I help my daughter find herself and her natural sense of self-worth. My gut tells me her negative feelings are temporary. Her surging hormones, these seemingly endless life changes, and puberty-inspired growing pains will even out eventually, and I have to believe that she'll find her light again. One day, she won't look in the mirror and say she's "ugly." Instead, she will go back to being the confident girl who couldn't stop talking about how beautiful and wonderful she was.

But if she doesn't find her self-confidence and self-worth again, I'll be right there to remind her of all the things that make her beautiful, including but absolutely not limited to: her thoughtfulness, compassion, creativity, and unconditional love for her two parents, who are both trying their best to figure out how to make her happy.