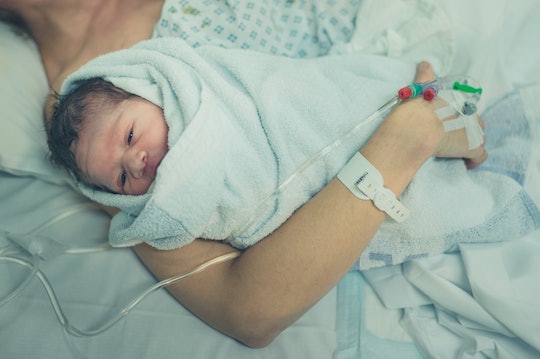 11 Reasons Women Shouldn't *Have* To Try For A "Natural" Birth

For both of my deliveries, I was very open to the idea of a medication-free, vaginal delivery. It was my first choice, actually. Many "natural" birth proponents praised me for this "superior" birth plan. As it turns out, I wound up with a C-section the first time around, followed by a medicated VBAC years later. A "natural" birth didn't work out for me, and hey: that's OK. Frankly, it would have been fine for me not to even try. Women shouldn't have to try for a "natural" birth and, moreover, shouldn't have to defend that decision to anyone.

Truth be told, I didn't really have super-detailed birth plans for either of my deliveries. I wanted a medication-free vaginal birth, honestly, because it just seemed like the most straightforward way of getting a baby out of my uterus. I generally subscribe to an "if it ain't broke don't fix it" approach to life, and a "natural" birth went alone nicely with that philosophy. But, truth be told, I wasn't passionately committed to my preference. Because I recognize that, as humans, we don't know what we don't know. Maybe a med-free birth would be my path of least resistance. Or maybe the pain would be incredibly intense and I'd want an epidural. I also appreciate that life in general is fairly unpredictable when it comes to the details, and I didn't want to get too attached to anything that was not guaranteed.

For a lot of people, "natural" birth is an important, profound, empowering, magnificent experience. But that doesn't negate the fact that it's also highly romanticized in our culture and, as such, many women often fell pressured to strive for this experience. So with that in mind, here are just a few reasons no one should feel compelled to attempt this sort of delivery: