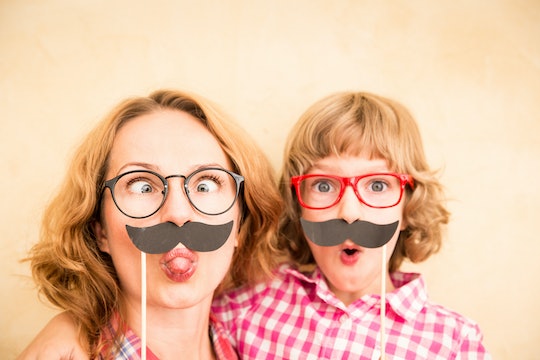 11 Reasons Why Every Kid Needs A Nerdy Parent

From the time I was in preschool, the "teacher's notes" section of my report cards unfailingly described me as "enthusiastic." It's carried through to this day, so it's no wonder that, for a long time now, I've proudly accept the fact that I'm a really big nerd. Because what is being a nerd, after all, if not having a deep and enthusiastic love of something? Nerd qualities set us up to be excellent parents, too. In fact, nerdy parents are the best, and every kid could stand to benefit from our admirable qualities.

Let's be clear on something, though: no one else can label you a nerd. It can only ever mean anything as a self-declaration. But let's also be clear on something: if you have an entire bookshelf dedicated to Octavia Butler and Ursula K. LeGuin, you should probably admit you're probably a nerd. Or if you have a whole room dedicated to crafting? You're probably a nerd. Were you part of a Game of Thrones pool? Nerd. Disney-themed living room? Definite nerd.

And it's cool, dudes! Being a nerd is fun and nothing to be ashamed of! Embracing the nerd label is a sign of not only enthusiasm but of accepting who you really are, regardless of what other people think of you and your interests. This is good for us and for our kids, and for the following reasons: