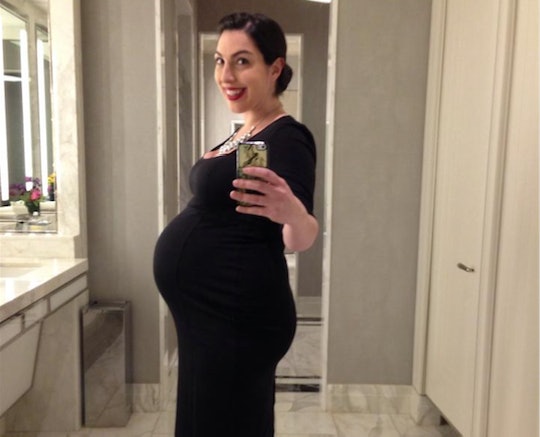 No, My Body Wasn't "Made To Have Babies"

I've heard it to varying levels of creepy and problematic. When a friend was worried about getting pregnant, another well-meaning friend assured her that our female bodies are made to have babies. People who want to severely limit anything else a woman wants to do with her body often rely on the same sentiment. In a best case scenario, I know how people mean it: female bodies are, on the whole, well-equipped to make and carry a fetus to term. Nevertheless, the idea is really icky. My body isn't "made to have babies."

Control over women's bodies — who has agency over them, ownership over them, and rights to them — is a major theme. It's both its own imperative and serves as a stand-in to represent other types of social and political power and status. It's in this context (read: the real world) we have to consider any assertion that states, unequivocally, what a woman's body was "made" to do. Because it's yet another example of women being told their purpose instead of determining it for themselves. It also lumps literally all female-bodied people into one group instead of daring to consider them as individuals.

Of course, there's the argument that this particular sentiment isn't anti-woman but just, you know, science. And yes, there's something innate in all species (if not individuals) that tells us to have sex and make babies. But procreation isn't an act a woman can do on her own. If we want to have babies we need sperm, which doesn't grow on trees (well, not human sperm, anyway, and you'll never be able to cross pollinate with an oak). So if your logic is that the point of humans is to reproduce, then we should be telling men that their bodies were made to make babies, too. Yet I have literally never heard anyone tell a man his form is tailor-made for baby making.

You can also substitute "scientific fact" with "divine plan" if you're the religious or spiritual type, and my logic here is still the same. I can't speak to all religions, but as someone who was raised Christian and obtained a degree in Jewish Studies, I can assure you that "be fruitful and multiply" was commanded to men and women. Again, this is not something anyone can manage on their own.

I also think it's highly debatable to say that the continuation of the species is our purpose anyway. Personally, I subscribe to a more chaotic view of life: there's no plan or point. As a group, we just are and reproduction is just one way we continue to be over time. It's something humans do but I see no evidence that it's the point of us. May as well say the point of humans is to poop: we all do it and we all have to do it.

I would be remiss in discussing the idea that women's bodies are "made to have babies" without acknowledging the fact that it's often used as an anti-choice/forced birth talking point. Women, they assure us, are meant to have babies! That's what our bodies were made to do. As such, pregnancy and birth is a woman's "natural" state and abortion is "unnatural." But the first recorded abortion took place more than 3,500 years ago, and I think it's safe to say that it almost certainly wasn't the first as there's no indication that the procedure was novel or unheard of. Historical documents, art, and oral histories represent numerous abortion techniques, many of which require nothing more than strenuous labor or diving into water — nothing unnatural about that. Other methods include abortifacients that could be found in anyone's garden (#allnatural).

As time has gone on, newer and safer techniques have developed in order to end an unwanted, unsafe, or non-viable pregnancy. One might argue them to be "unnatural" based on the fact that they don't exist in a natural setting, but that should hardly be taken to mean "bad." You know what else doesn't exist in a natural setting? Polio vaccines, but I'm going to go out on a limb and guess that most of us leap at the chance to get such an "unnatural" product. (Those of you who don't: please reconsider.) Regardless of method, the desire to obtain an abortion, and the instinct to pursue one for any number of reasons, is as typical as getting pregnant in the first place, and has been around since the beginning of history, at least.

The idea that my purpose — any woman's purpose — is to basically be a sentient womb is also deeply offensive and problematic. Are we seriously going to measure the worth of approximately half the people on Earth based on one thing our bodies can do? What about those among us who don't want children? And what if we want children but our bodies can't have a baby? What negative psychological toll does it take on the intentionally child-free, women dealing with infertility, and trans/non-binary women to say, "Your purpose and measure as a woman is tied to your ability and willingness to do THIS, and you're not doing it or can't do it." The social pressure of not having children, infertility, and gender dysphoria are difficult enough to deal with in and of themselves without adding onto that the idea that not having babies, for whatever reason, is going against what women's bodies are supposed to do — the idea that if you're not having babies you're not really a woman.

And what's the point of a woman's body after she's done having children? Does this mean she's fulfilled her purpose? Does this mean her body has no real point anymore because she's done her biological and womanly duty? When you make such a nebulous statement about the point of a woman's corporeal existence, particularly in the context of a society where we are valued largely on our fertility, you see the problem, right?

You know who's more important than any hypothetical baby my body should allegedly be having? Me! Because I'm here and real and have some ideas of my own about what my body was "made" to do. It also does a decent job singing opera and doing yoga and writing stories. It does this really neat trick where it does a series of cartwheels and lands in a split, even at 35, thank you very much. It is excellent at eating ice cream and going on vacation (sometimes at the same time). It has crappy, asthmatic lungs but still does a great job lugging around my brain, which is my favorite part of my body. And yes, one of the many things my body was made to do was have babies... but only because I said so. Anyone else can tell me that's what it's made for but only I get to decide whether or not it's true.