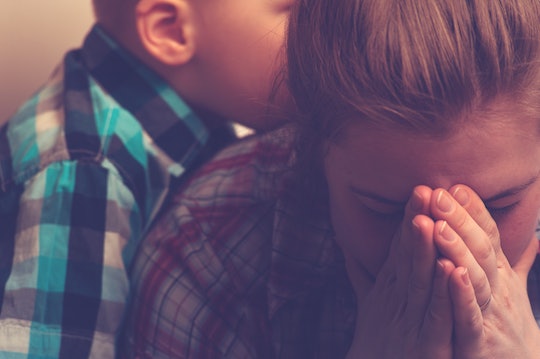 I know you're tired. I know that, right now, you have at least a million things on your mind. I know that most of those things have to do with someone's schedule, what needs to be cleaned, or what needs to be purchased; all things related to the care of someone else and not, you know, you. I know that you’re being pulled in every direction, but no one seems to notice or care. I know, because I am the Default Parent, too.

See, the Default Parent is the one who does the heavy lifting in the household, and for the household, and often that heavy lifting goes unnoticed because it's such an integral part of everyone else's daily life. The Default Parent lays the foundation that everyone else walks on, and everyone else is doing so much walking that they often forget what makes that ability even possible. As the Default Parent, you're the first parent your kids run to with a problem. You're the one who give the most baths, fixes the most booboos, reads the most bedtime stories, and the one who never, ever get to use the bathroom privately. You're emotionally exhausted because you do the bulk of the emotional labor, and you're physically exhausted because you're usually the one turning that emotional labor into physical labor, too.

When I was growing up, we didn’t have labels like "Default Parent" to explain the often complicated dynamics present in an interpersonal relationship that involves co-parenting, and how those dynamics are influenced by culture, class, and the like. Instead, I was offered a heap of antiquated bullsh*t about how moms "just know" more about their kids, do more around the house, and do it all without running for the hills because, hey, that's "just what moms do."

It’s not easy being on the job day in and day out. Children, especially young children, don’t exactly have an off switch. They don’t understand boundaries.

My mother was a stay-at-home mom. She had a few part-time jobs here and there, but for the most part, my brother and I were her 24 hours a day, seven days a week job. My father, on the other hand, was hardly present. He worked long hours in construction, coming home no earlier than 6:00 p.m., but often later, and consistently worked nights for double-shifts and weekends, too. His job wasn’t exactly easy, either. I don’t think there was ever a discussion about division of labor within the home, though, and especially child-related labor. My mother took on this duty headfirst, without prompt, and rarely, if ever, complained. In my childhood home, it had more to do with what was expected of a woman than it did a necessary choice that allowed our family to function adequately.

Basically, my mother was the Default Parent without realizing she didn't necessarily need to be.

It’s not easy being on the "mom job" day in and day out. Children, especially young children, don’t exactly have an off switch. They don’t understand boundaries. They don’t realize caretakers need a break. They are demanding, and while it's often in the most loving and adorable way, they're demanding nonetheless. They have the energy of a thousand suns, and seem to realize when that energy is about to be the end of us, because they also give us the best hugs. So even on the days we, as Default Parents, want to quit, we still don’t. Our kids are awesome, and it's an awesome opportunity, and often a privilege, to be the person primarily responsible for them.

That said, Default Parents certainly get the short end of the proverbial stick. When we get sick, it’s up to us to nurse everyone else back to health. We’re the ones that take the temperatures and write down when each medicine was given. We know the names and locations of our children’s doctors, and we make the appointments. When our kids are old enough to start school, we’re the ones who research which school is best. We get to know the teachers and the names of the other kids in class. We remember which days are holidays and make sure our children are being cared for on those days. We keep track of household supplies for our little ones, like the body wash and shampoo and kid-friendly toothpaste. We know when it’s time to buy our kids new shoes and new clothes, and we make the hard decisions when it's time to toss or donate those items.

Now, I’m not writing this open letter to bring us all, as Default Parents, down. I’m not writing it because I hate being a mom, either. I’m writing this necessary letter because we need to truly acknowledge the work of Default Parents. We need to recognize the parents who lay the foundation for their families' continued futures, and not in extravagant ways, but in small ways that often go unnoticed. Our emotional labor matters. Our physical labor matters. The work that we do matters. We, without a doubt, matter.

I was always so fearful of becoming a mother because I thought I would automatically become the Default Parent. But when I finally had my son, I had hoped that maybe, just maybe, things would be different than what my mother experienced. It was 2014 and I was a feminist, damnit. That should keep me from having to do all the heavy child-related lifting, right? I bet many of you felt the same way, too. But here we are, and the reasons for our current lot in life are complicated.

Don’t be afraid to remind your family about all the hard work you do. If they’re old enough, and failing to recognize it, go on the occasional strike.

We need to continue to work toward a future where both caretakers are able to parent on an equal level. I know my partner would love to have the energy and the mental headspace to spend more time with our son at the end of a long work day. But his days are spent buried in code at a demanding tech job, which he keeps because we need his salary to pay for our apartment, for our son’s preschool, and, to be frank, to afford me the ability to have a more flexible career. So, you know, let’s demand equal pay for equal work. Let’s continue to push for mandatory paid, and extended, maternity and paternity leave. Let’s work toward abolishing gender norms for good, so it won't seem "odd" for a father to want a flexible job that allows him more time with his family, too. Let’s aim for affordable childcare for all. All these things could actually begin to make this job just a wee bit easier on all of us.

All those aforementioned goals are worth fighting for, and I know that so many of us are continuing to engage in that fight, day in and day out. But until the day that all parents are treated equally and, as a result, are burdened with an equal amount of tasks arrives, I encourage you, Default Parent, to do some for the following:

Don’t just make time for yourself. Instead, steal it. Your family won't force you to take a vacation, so take moments whenever you can. Take extra long showers. Don’t be afraid to lock the bathroom door once in a while. Squirrel away some household money, then go to “the grocery store” on your own and take a detour to a favorite place and do whatever the hell you want.

Even though we've become the "go-to" parent in our children's lives, we should also try our best to step away and let our partners and co-parents figure it all out.

Don’t be afraid to remind your family about all the hard work you do. If they’re old enough, and failing to recognize it, go on the occasional strike. Rest assured, they’ll come around when supplies start to run low and appointments are forgotten and laundry is scarce.

Sometimes, and even though it's difficult, you need to let go a little. I know I’ve had a hard time giving my husband more control over the parenting, which just makes things harder for me in the long run. Even though we've become the "go-to" parent in our children's lives, we should also try our best to step away and let our partners and co-parents figure it all out.

And in the end, remember that you're amazing. In fact, thank you for being amazing. You might not hear it very often from those around you, but know that you deserve to hear it. Every. Single. Day.

More Like This
When Does A Baby Recognize Their Father? A Pediatrician Explains
What To Do If Your Toddler Keeps Taking Off Their Diaper At Night
Reddit Backs Mom Who Got Scolded By Teacher For Not Inviting 30 Kids To Birthday Party
10 Moms On Why They Exercise
What Parents Are Talking About — Delivered Straight To Your Inbox