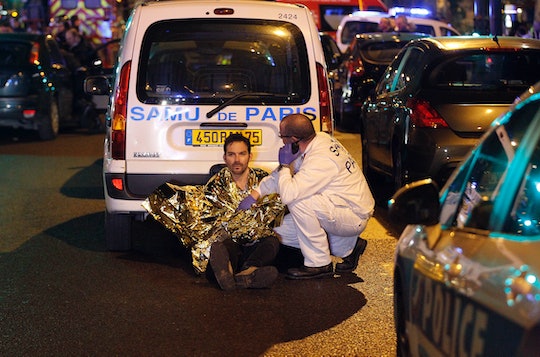 Paris Terror Attack Is The Worst Since 9/11, & The World Stands With France

EARLIER: With well over 100 people dead following at least six shootings and two explosions Friday night, the Paris terror attack became the deadliest since 9/11 when Al Qaeda operatives crashed two commercial aircraft into the World Trade Center in New York City and hijacked two other planes. According to reports, two still unidentified attackers killed at least 100 people at Le Batalan theatre before being killed by police in a raid. More people are reported dead as a result of earlier shootings and explosions. One shooting was at a Cambodian restaurant. At least two of the explosions were suicide bombs.

The Daily Beast reports that according to Intelecenter, a site that monitors jihadist activity, the apparently coordinated Paris attack Friday night is the 28th attack to kill more than 100 people since 2001. The 9/11 attacks killed 2977, the total death toll for lives lost in New York City, Washington, D.C., and a field in Pennsylvania where one of the hijacked planes crashed.

It's not just the data that show Friday's attack is France's 9/11. Many people on Twitter expressed that sentiment independent of the comparative number of dead.

It's still not known who is responsible for the attacks and some assailants are still considered at large, but the effect on Paris and France at large is already evident. French President Francios Hollande declared a state of emergency. France closed its borders Friday night, and the Paris Metro closed (although it closes at 12:30 am anyway). They turned the lights out on the Eiffel Tower. For the first time since 1944, Parisian residents are forbidden from going outdoors.

The death toll Friday was 10 times that of the Charlie Hebdo attacks in Paris in January, which killed 12 people.

As authorities gather more information, people and governments all over the world have decried the violence expressed their solidarity with Paris. As President Obama told reporters Friday evening,

Update: Over 153 people were killed in the attacks on Paris Friday, CNN reports, in a total of six attacks. A spokesperson for the Paris Prosecutor said that eight extremists are dead, seven killed in suicide bombings.