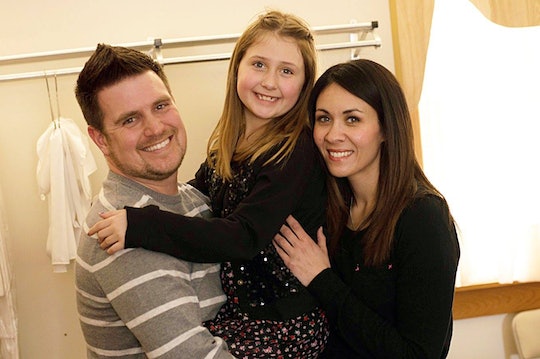 Polycystic ovarian disorder (PCOS) is something of an invisible disorder: you can't really see it or how it impacts the body, it's often undiagnosed, and rarely are the symptoms of the disorder taken seriously. Thanks to PCOS I suffer from sporadic mood wins, unrelenting pelvic pain, and frequent ovarian cysts. But my husband, try as he might, just doesn't understand how difficult it is to live with this hormonal disorder. In fact, PCOS almost destroyed my marriage, and in ways I could have never imagined.

More Like This
Therapist Says: Alone Time For Moms Is A Necessity, Not An Indulgence
Lightning Crotch Can Actually Tell You These 7 Things About Your Pregnancy
9 Things Not To Say To A Pregnant Woman On Mother’s Day
5 Signs Your Baby Is Too Cold

Of course, it took a while for PCOS to chip away at our marriage until it felt as if there was nothing left. And if I'm being honest I can't blame PCOS for the entirety of our troubles. At the beginning of our relationship my husband and I had trouble communicating, and since we were relatively young we were also too immature to evolve as individuals and as a couple. We thought, thanks to our naivety, that our problems would simply fix themselves; that if we just hung in there and side-stepped our issues they would one day vanish and we would find ourselves on the same page.

So when my doctor found a cyst on my ovary, and I had to endure a variety of tests and treatments, including surgeries, the cracks in our relationship grew. Having PCOS brought the weaknesses in our marriage into focus, to the point that, on some days, the negative was all I could see.

As a couple my partner and I had never been through anything significantly challenging or distressing before, so the PCOS diagnoses was a shock to both of us. But I do believe he handled it rather well. He was present at doctor appointments, there when I had to go into surgery to remove an ovary, and caring when I was post-op and suffering through a painful recovery. And after the birth of our daughter and my subsequent battle with postpartum depression, I believe we worked well together to be the best parents we could be, and despite my continued PCOS issues and complications.

PCOS made me feel as if I was on an island, reaching out to my husband who was too far away to hear me or see me.

But by the time my daughter was 2 the issues in our marriage resurfaced with a vengeance, and at the same time as my PCOS symptoms took a tern for the severe. My periods were heaver, my pelvic pain was more unbearable than ever before, and sex was so painful I rarely wanted to have it. This was also the time my husband and I wanted to start trying to have another baby, so the "pressure" was on... even though I was feeling less and less like myself.

After a few months of trying to conceive, I found out I was pregnant. I immediately made an appointment with my doctor the next day, excited that I was going to be a mom of two. But when the doctor looked for a fetal heartbeat there wasn't one, and the pregnancy I had already grown so attached to in just 24 hours vanished right before my eyes in that unforgiving exam room. I had a D&C the next day, and in the back of my mind I started to wonder if PCOS was to blame.

The cysts in my ovaries had multiplied and grew larger in size. Every single time they had to be surgically removed our finances suffered, to say nothing of the emotional or physical toll they took on me and everyone in my family. I spent so much of my time walking around in constant pain, wearing a mask of joy as I endured the grief of pregnancy loss and the agony of my PCOS symptoms. Then I suffered another pregnancy loss, and the fabric of my marriage started to rip under the pressure of so much torment and dejection.

I felt defeated and, perhaps even worse, alone. My partner and I were only having sex as a means to an end — to have a baby — so the intimacy in our marriage felt non-existent. PCOS made me feel as if I was on an island, reaching out to my husband who was too far away to hear me or see me. He couldn't understand how it felt to be in a body that felt so diseased; a body that seemed to be failing me at every turn. Our relationship was more of a farce then a foundation of support, and at a time when I needed help and understanding and a partner to walk through this lonely experience with me.

I found out I was pregnant a few weeks after consulting with my doctor about potential fertility treatments. My marriage was in shambles, yes, but one goal remained: to have another child. It was a goal both my husband and I shared, and in the end it was a goal that kept us together through an otherwise tumultuous time. We knew a person was missing from our family, and we were determined to meet that person no matter what. My doctor told me my chances of carrying the pregnancy to term was slim, and my pregnancy was labeled a "threatened abortion" immediately after it was confirmed. But still, I had hope. And that hope is what got me through.

I gave birth to my son 40 or so weeks later, and with his birth came a renewed sense of life within my marriage. Of course, I'm not saying having children will magically fix your relationship troubles, and I'm not implying that my husband and I have left our issues in the past. Every single day we work at our relationship, and I know that's not going to change anytime soon. But I can say that while my PCOS nearly ruined my relationship, it didn't break it. We're still here, together, trying to make it through debilitating symptoms, the trials and tribulations of parenthood, and the uncertainty that only the future holds.