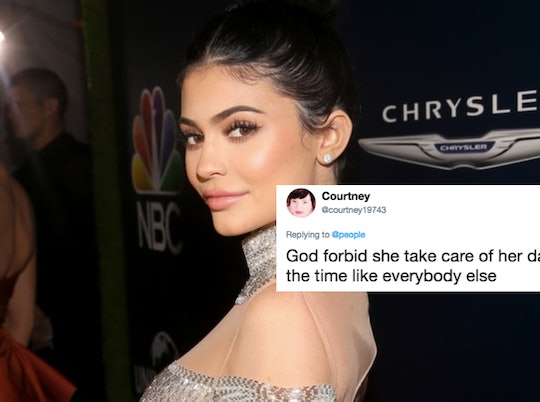 Given how judgmental people are about how people parent on the playground, it was only a matter of time before the mommy-shamers came for mega-millionaire Kylie Jenner. It's a shame, but celebs just can't get it right with the general public, especially when they do anything to make their lives easier. So it's not surprising that people are dragging Kylie Jenner for reportedly hiring a nanny after saying that she didn't want to in the first place.

Before she gave birth, it was rumored that Kylie wouldn't be hiring a nanny right after having her baby. An anonymous source told People that she was planning on relying on her mom and sisters in the very beginning, which is pretty reasonable given how close they all are and how much time they spend together. Really, they're like their own little village and Kylie lives just minutes from her mom's house in Calabasas. Fans joked then, too, but the world generally applauded her move as if it would have been a silly thing to hire one at all.

On Tuesday, People again reported on the nanny sitch, writing that Kylie reportedly had a change of heart. Another insider told the entertainment news outlet that she had "hired some help" for the new baby, which makes complete sense. She's the CEO of a company and you know that her mom and sisters are just as busy. And she and her boyfriend Travis Scott reportedly don't live together. Like, a woman needs some help with a baby.

Us Weekly reported that she was a "natural" with the baby but also feeling "overwhelmed," which is why she hired a baby nurse "to assist with taking care of her bundle of joy". The source added:

The sad thing about all of these comments is that they're mostly from other women, who, instead of being supportive of another human being dealing with a newborn and all that postpartum chaos, choose to rip her a new one. And the implications of their jabs are totally sexist and perpetuate a myth that hurts women in the long run.

For one, if I were as rich as Kylie Jenner there is no way I would not hire a nanny or night nurse for my baby. I would even save up and work extra hours to afford one a few times a week. Sleep and time for self care are so important, especially as a woman recovers from labor and transitions into her new normal. A nanny is a privilege, for sure, but it's one that people are allowed to take advantage of if they have the means to do so.

Having some help in the house doesn't mean she loves her child any less, either, as some people insinuated with the "I'd be too scared to have a stranger hold my baby" comments. Ugh, spare me, please. There's this idea that our society perpetuates that women have to "have it all" and be it all and that somehow, suffering makes us more of a woman. That is just not true.

Some people do it all and love it all. Others do it all and barely scrape by, never asking for help because they've been socialized to believe that that's a sign of weakness or not being a "good parent."

It's not being spoiled or lazy or a bad mommy to have a nanny. If anything, it's so healthy to know that there's no way you can do everything on your own and you need an extra hand, whether it's hiring five baby nurses like a celeb or calling your neighbor and asking them if they want to carpool more so you have your mornings a few times a week or telling your boss you're leaving early for a ballet recital without feeling guilt. We don't have to have it all and do it all.

Instead of bashing women who ask partners, family, and yes, pay people, to pick up some of the parenting duties we should be supporting them.