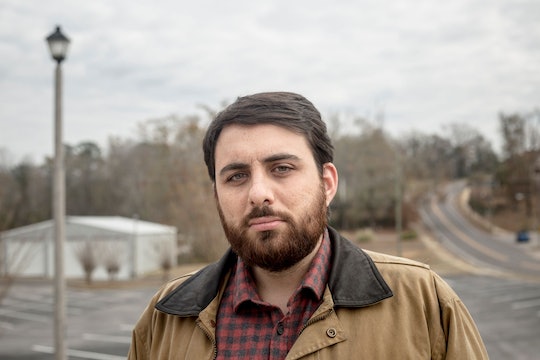 After the podcast Serial debuted and redefined the medium forever back in 2014, listeners wanted more and more and more of the real-life Baltimore murder it chronicled in nearly unimaginable detail. Three years later, the makers of both Serial and the radio show This American Life are back with more — though not of the same. S-Town, which dropped March 28, mimics the multiple-installment format of Serial, and its true story encompasses its own captivating, unpredictable series of mysteries and astute explorations of human nature. And, after many of them binge-listening to all seven "chapters" in just a day or two, S-Town fans are again ravenous for more. A roundup of photos from S-Town is the perfect way to come down from that small-town, treasure-hunting podcast high.

It's This American Life senior producer Brian Reed, who's been with that show since 2011, who immerses his audience in the drama based in tiny Woodstock, Alabama — or "Sh--town," as the man who first alerted him to it calls the place. John B. McLemore is a brilliant, eccentric lifelong Sh--town resident who got in touch with Reed in 2013 to urge him to investigate allegations of police corruption and rumors of a murder cover-up there. Soon, though, the story becomes all about McLemore in ways that Reed never imagined, and that launches S-Town onto a much different narrative arc than its predecessor, Serial.

But there's no mistaking that some of the same team members worked on both the shows. Serial's co-creator, Julie Snyder, became S-Town's executive producer, and Koenig is an executive producer along with This American Life creator and host Ira Glass. They're all pictured below, in that order, along with Reed, who is seated third from the left.

Other photos from the story — which includes a treasure hunt, cousins who may or may not be conniving, antique clocks, death, and lots and lots of tattoos — would seem a bit nonsensical to non-listeners. But to those who got totally immersed in all that was S-Town, photos of the storied McLemore maze, for example, will be endlessly fascinating.

Ditto the gold-plated dime that McLemore gifts Reed early on in the series.

Learning that McLemore's chest is covered in tattoos — not to mention gold nipple rings — was a surprising development after hearing the man rail against them to Reed. But, soon, we learned that he'd decided to ink himself up to help keep a local tattoo parlor in business — or so one of the establishments owners thinks.

"[John would] ask certain things like, 'What's the rent? What's your power bill? When's that due,' [and] he just planned his tattoo to where it pretty much paid everything up in increments," a man named Bubba told Reed early on in S-Town. "If it weren't for John, I'd be tattooing at my kitchen table right now. I think he sacrificed his skin to help us out."

Of course podcast loyalists would dig up a photo of that as well, though, in all fairness, it's probably best to keep McLemore's private life private.

Then there are these behind the scenes photos of Reed with a few of those aforementioned antique clocks...

... And this glossy snapshot of Snyder and Reed working through the story:

The true beauty of S-Town, of course, is that it transports listeners into the story with nothing but audio — no visual aids required. Still, the photos supplement that rare podcast mastery, especially because there's no guarantee of a Season 2.