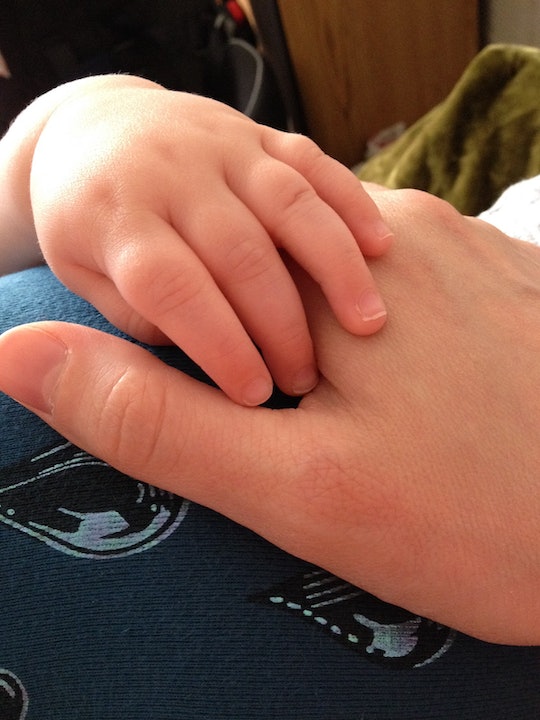 Picking A Baby Name Is Hard, So That's Why We Waited To Meet Baby Before We Made A Choice

We didn’t have a name picked out for our son when we went to the hospital, and we were only a little bit stressed out about it. No one tells you that picking a baby name is hard, even though they tell you all about the names you should pick and the ones you definitely shouldn't. Going into delivery, we knew we were going to have a boy (no surprises for us, thank you), and we had a lot to keep in mind. I wanted an Irish name, since my husband and I have Irish heritage, but I wasn’t stuck on having it as a first name. We both wanted a name that didn’t sound too jock-y either. We have a friend who manages a toy store in town, so she warned us off the “cool” local names of the last few years. I wanted something that was two syllables, to flow with his last name a bit better. We had names we liked, and names we kinda liked — but that was about it.

Our son was born close to midnight, so the rest of that night was taken up by immediate postpartum care for both of us. The next morning, my husband suggested the name: a combination of names on our shortlist. I looked down at the baby on my chest, and the tears started to flow. That was him. That was our baby. And even though I knew it was the name, I still wanted to sleep on it. When my parents came later that day, our day-old baby was still “Buddy.” I didn’t want to open up the box of naming him just yet.

So we waited. And it was fine! There are plenty of advantages to waiting to name your bundle of joy until they come to greet you face-to-face, and any disadvantages weren’t that big of a deal for my husband and I. Sure, it might have made life a little bit easier if we’d picked something out ahead of time. But nothing beats seeing your baby for the first time, and for us, coming up with a name was a part of our new family getting to know each other.

Everyone has an opinion — friends, family, coworkers, acquaintances, enemies — and unfortunately, some of them might feel like they should share them with you — especially when it comes to baby names. They might hate the names you’ve picked out, liked them so much they’ve stolen them for their own, or disliked them so intensely they’ve tried to make you change your mind. Even when you love the people behind the opinions, it’s still a bit much to swallow. Even though we weren’t aiming for a crowd-pleasing vote on our baby’s name, we still wanted to see what people thought of our possibilities.

My partner and I talked over baby names in kind of a general way, not really tipping our hands too much, before our son arrived. We talked about the names we liked but didn’t think would work; we talked about what kinds of names would go well with our last name; we talked about whether a popular name was really so bad, and on and on. Some of our friends were convinced that we had a name picked out and that we were holding out on them. It was partially true, and we were telling the truth when we said we were a bit stumped.

But here’s the thing about keeping your name well hidden: No one can poke fun or voice hate over a name they don’t know. No one can say, “You’re naming him WHAT? People will call him [insert something awful that rhymes],” or “I knew someone named that, and they turned out to be the worst person I’d ever met.” If someone is bold enough say that about your baby’s name while they’re dropping off a lasagna, I dearly hope that you have a partner who can usher them out the door immediately.

We Wanted To Meet Him First

How would we know if he was a Joseph (he’s not) if we’d never seen him before? What if we got all settled on a name, and after he came out of the chute, the name just didn’t suit his precious squishy face? I was one of those parents who loved and liked my kid during pregnancy, but I couldn’t wait to meet him to see what he was like. What would he look like? How would he act? I knew most newborns don’t have *that* much personality shining through in the first 36 hours, but I was still hanging on to the element of surprise. We liked strong baby names, but like, what if our little buddy didn’t look a thing like the baby we’d pictured in our minds?

I wanted to meet my baby before giving him something so important and lasting as a name. I can see why that wouldn’t be important to someone else, and to each their own, but it was how I felt. I had this deep and bodily curiosity about my baby in utero, a feeling of not being able to meet the person who would mean more to me than almost anyone else in this life … and I couldn’t imagine giving him a name before I even saw his face (which, by the way, was perfect and wonderful in every way).

It Doesn’t Hurt Anything To Wait And See

Not knowing the sex of a child before it’s born doesn’t change that much about getting ready for their arrival, except that it maybe annoys some of your loved ones.

In our experience, we were just indecisive. Despite the short list, we really just didn’t know what names we loved and which we kinda, sorta loved. We apparently needed the pressure of having the birth certificate paperwork in front of us (and some pushy nurses who kept asking if we had a name yet) before we could commit to a final decision. In the end, it doesn’t really make much of a difference. We told our immediate families his name, then made the ultimate modern announcement of a Facebook post, complete with picture. Here’s the guy, we said. He’s perfect and we’re in love. We got around to it two days after he was born. And by the time the likes and comments began rolling in, we were knee-deep in diapers and couldn’t have cared less.

But you know what? Even if it was a bit stressful to have that last, little, hugely important detail not ironed out, everything (and everyone) turned out fine. If we had another baby, I wouldn’t be in any hurry, because as it turns out, waiting to name your baby is no big deal.

So now, when and if the time comes to do it all over again, you better believe I wouldn’t change a thing. Except, maybe the name.