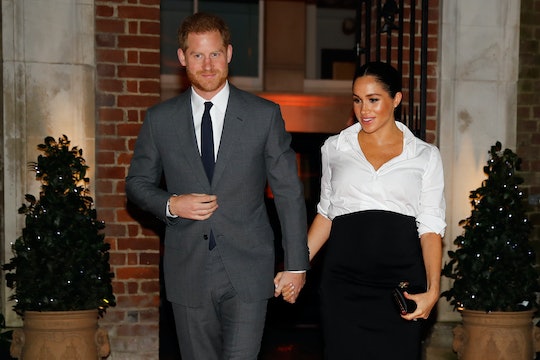 Meghan Markle is inching ever closer to her due date, and apparently she and Prince Harry are getting excited. I mean, presumably they've been excited all along but now they're, like, openly excited. Like talking to people about it and stuff. And perhaps they're able to finally let themselves get openly pumped for a reason: a little trip coming in the near future. Prince Harry is taking Meghan Markle on a babymoon of sorts to an exotic place, and we all know a holiday on the horizon is enough to make anyone giddy.

Although, okay, to be fair their little babymoon might be just a tiny bit work related. Maybe the trip was requested by Her Majesty's Government, which makes it slightly less spontaneous. But still... they're going to Morocco and, there you go, I've spoiled it for you. Prince Harry and Meghan Markle are visiting Morocco next weekend for an official visit, according to a tweet by Kensington Palace. So here is why I think this should be considered a babymoon (also known as a holiday parents take before their baby arrives and changes everything, but this is not nearly as catchy): Markle is due in April, as per Town and Country. This trip is just weeks before her due date. And Morocco looks romantic and exotic and amazing.

Even if it is for work, I'm sure they'll make the most of it.

I have a sneaking suspicion that Markle and Prince Harry will be trailed by security, photographers, and reporters. But if they can manage to sneak away as the did back in the early days of dating (Prince Harry's secretly hung out at a Halloween party in 2016 in Toronto, Canada, without getting spotted, as per The Sun), Morocco is an incredibly romantic destination. The expectant parents can visit one of the many beach resorts in Morocco, dine al fresco at a rooftop restaurant, or visit the highest waterfalls in the country, Cascades d’Ouzoud, as recommended by Experience Travel.

Whether or not the pair manages to find time to get romantic on their upcoming stay in Morocco, they certainly have so much to look forward to even without a babymoon. They are getting ready to move to their new home, Frogmore Cottage, on the grounds of Windsor Castle, according to The Week. And, of course, they are getting ready to welcome their first baby. When the pair were guests at the Endeavor Funds awards on Thursday, Markle even opened up about her excitement over finding out the baby's sex with fellow guests, as per Hello!:

We don't know. Yes we decided to keep it a secret, and then that way… it's one of those things, like, no matter what it is, it's still going to be a surprise.

As for Prince Harry, Markle is clearly pretty happy with her choice in a father for a future child. Hello! reported that the Duchess told guests, "He is going to be the best dad."

Which is exciting enough, even without a babymoon.

I still hope they sneak off for a little babymoon and ditch their work, though. Haven't they ever seen Roman Holiday?