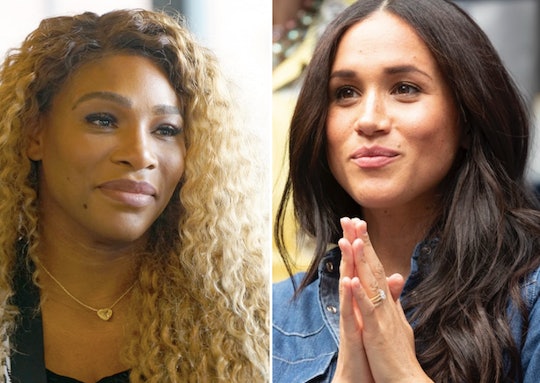 What do you get when the greatest tennis player of all time and the charming Duchess of Sussex come together? One unstoppable duo. Although they each have their own demanding schedules and sweet children to care for, Serena Williams and Meghan Markle's friendship seems unbreakable. In fact, over the years, the tennis pro has shed light on how close she and the former Suits actress really are.

Beyond her tennis career, Williams is also a fashion designer with her own clothing line, S by Serena. And in a recent interview with Us Weekly, Williams, who gave birth to her first child in September 2017, shared that she actually designs her clothes with her BFF, Meghan Markle, "in mind" for a very specific reason: "Because she's one of my best friends."

Although they haven't been photographed together much over the years, they have made it known that they're close friends and have supported each other at major events. For example, Williams attended Markle's royal wedding to Prince Harry in May 2018. Meanwhile, Markle, who welcomed her first child in May, flew to New York City recently to watch Williams play at the 2019 U.S. Open.

Since first meeting each other at a Super Bowl party in 2010, according to The Sun, Williams has been open about her love for her friend. And the tennis champ's quotes about the Duchess of Susses show just how deep their friendship is.

She's Always There For Her...

In September, Williams gushed to E! News about Markle making the trip to watch her play at the 2019 U.S. Open that same month. "Meghan is amazing," she said. "Like literally threw across the seas just to support a few hours with a newborn baby. She's the most positive, amazing person I know."

In November, Williams told Access Hollywood that Markle would drop everything to be there for her, even though she has such a busy schedule. "And that's just one of the many things she does for me. I call her, text her, crying, upset — she's always there," she said. "Doesn't matter what she's going through, she just sets the time away, and she's so amazing."

... Through Their Personal Highs & Lows

In July, Williams told reporters at Wimbledon that Markle is one of her most loyal supporters. "She couldn't be a better friend to me," she said. "Low moments, high moments, she's always there and that's all I want her to be."

They Have So Much Fun Together...

In 2017, Williams sang Markle's praises to Vanity Fair. "Her personality just shines," she said. And after Williams attended Markle's wedding to Prince Harry in May 2018, she was so happy for her best friend. "Yeah, it was super fun," Williams told InStyle in June 2018. "You know, I've known Meghan for years so it was good to see my friend happy."

In the later half of 2018, (after Markle announced her pregnancy), Williams told People that pregnancy hadn't changed her friend. "I'm like 'Meghan, stop being nice...you're the pregnant one, aren't you supposed to have hormones, why are you so sweet?' But that's always been her."

Even Markle Seems To Think So...

Needless to say, they have an unbreakable bond — one forged in the things they have in common. Even Markle has the sweetest thing to say about Williams; in a post on her now-deleted blog, The Tig, she wrote about what brought them together, according to E! News. "We are both the same age, have a penchant for hot sauces, and adore fashion, but what connects us more than those things is perhaps our belief in exceeding expectations — our endless ambition," she wrote.

With all this said, Markle and Williams' friendship is probably best described as #Goals.