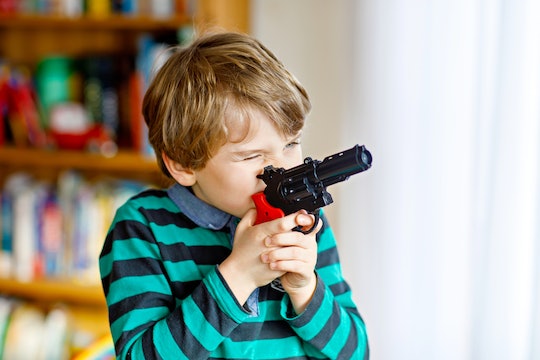 Should We Buy Our Kids Toy Guns? You're Asking The Wrong Question

When you walk through a store with your kid, they probably play the "gimme gimme" game. They'll point to clothes, books, and toys, asking you for just one thing to take home. They might want a new sweatshirt, a picture book with a dragon on it, a doll that can walk and talk, or a toy gun. Yes, that last one is sure to stir up a lot of feels for some, but regardless, it is a frequent sight in many a kid's toy box. But should we buy our kids toy guns? The question isn't new, but it's important.

More often than not, children's toys reflect our values and perpetuate ideas of what we will expect of kids once they become adults. Play kitchens, baby dolls, and toy tool sets are just a few examples, but there's no better example than that of toy guns, the symbolism of which is so deeply embedded in the American culture and psyche that we enshrined them into our most important legal document via the Second Amendment. Interpretation of what the Second Amendment means and entitles one to in terms of gun ownership, of course, is the subject of much discussion and debate (see also "a well-regulated militia"), but the fact that it's there at all speaks to the idea that, from our foundation, firearms have been important to our national identity.

And it makes sense that this is a constant and polarizing parenting dilemma: there are approximately 393 million civilian-owned guns in the United States — that's 67 million more American guns than American residents — so the fact of the matter is that between 32 and 42 percent of kids live in a house with a firearm (we have no exact numbers). For many children, guns are as much a part of life as kitchens and tool sets. And while many gun owners follow best practices, such as storing guns and ammo separately and using gun safes, about half of these homes have guns that are easily accessible and, despite many parents' beliefs, 75 percent of children know exactly where the family gun(s) is(are), according to research from the Center for Injury Research and Policy. Meanwhile, Everytown for Gun Safety reports that over 2,700 children and teens are shot and killed either by homicide (60 percent), suicide (35 percent), or by accident (4 percent) annually. An additional 14,500 are shot and injured every year. According to the Gun Violence Archive, there have been 323 mass shootings (gun incidents with at least four deaths) in 2018. Put another way: just about every day in the United States, four or more people are killed by guns in their communities — on their streets, in their houses of worship, and in their classrooms.

This is where many of us are coming from when we worry about making guns part of our children's playtime. Guns are common and deadly. Does giving our children toy guns perpetuate a deeply problematic gun culture? Worse still, does it minimize the seriousness of real guns — making all firearms seem like casual playthings that hold no consequences — and make them more likely to injure themselves and others?

A toy gun, in and of itself, never killed or injured anyone. But in the context of a society that sees 34,000 gun deaths per year and about twice as many injuries, a toy gun is a symptom.

When my first child, now 7 years old, was born, I was vehemently against him so much as watching a cartoon with a gun, much less owning a pretend one. His father and I carefully monitored all media he consumed and were quick to shut down anything that depicted guns. We refused to buy toy guns, not even a water gun. We politely accepted and then immediately got rid of any toy guns other people gave to him as a gift. And we were so smug and self-satisfied, that, of course, the Universe decided to stick it to us real good. Because you know what my beautiful, peaceful, loving little boy was obsessed with?

While our experiences actually raising a child never caused us to completely abandon our general stance that guns aren't great and we don't want to make a game of them, my husband and I did soften our policy. We still limit exposure to guns in media (the muskets in Muppet Treasure Island and blasters in Star Wars are OK but we're not allowing Tarantino films just yet) and do not allow realistic-looking toy guns in our home (not even with the requisite orange tip). Yet, we've relented and let our little guy get a brightly colored Nerf gun and a frankly cartoonish-looking Super-Soaker. This was in part giving in to a losing battle, and in part to avoid the age old conundrum of making something forbidden so appealing that it becomes a far bigger deal than it would otherwise.

I would also be remiss not to point out something tremendously important in this decision: my son is a blonde-haired, blue-eyed white boy living in rural Connecticut. He has a level of privilege and safety that is not afforded other children, specifically children of color or children in an urban setting, where the presence of a gun, real or pretend, means something far different than it does in the big empty field behind our house. Certainly this privilege doesn't inure him from all the issues that come along with playing with toy guns (including the worry that it could ever be mistaken for the real thing), but I'm not ignorant of the fact that the possibility of any consequence would be far more significant if he were a child of color. So I firmly believe that parents' decisions on whether or not to allow a toy gun in the house will vary from family to family.

The question of whether to give kids toy guns — along with the decision itself — speaks to how we want our kids to think of guns in a largely gun-loving culture moving forward.

The question of whether kids should play with toy guns is huge: spend enough time on any online mom group or message board and it will eventually come up and will probably will be the subject of a heated debate. Here's the problem with that: right or wrong, it's a question that is asked more often than so many other important questions about our children and gun culture.

"Am I doing everything I can to store my guns safely?"

"Am I teaching my child about gun safety?"

"Am I having discussions about the media they're consuming that includes depictions of guns that will inform their attitudes and ideas?"

"Am I reaching out to my legislators to enact common sense gun laws?"

Are we mustering up the courage to ask the people we entrust with our children "Is there a gun in your house? Is it locked up?"

The question of whether to give kids toy guns — along with the decision itself — speaks to how we want our kids to think of guns in a largely gun-loving culture moving forward. It's a question worth asking. But when it's the only question we're asking, or one we're spending more time on than the questions of actual guns, it's the illusion of security and control. A question of artificially inflated importance.

A toy gun, in and of itself, never killed or injured anyone. But in the context of a society that sees 34,000 gun deaths per year and about twice as many injuries, a toy gun is a symptom. And while treating a symptom might make you feel better, the illness rages on.

More Like This
What Is RSV?
Tips For Apple Picking With Kids
Here’s Your Guide To Paced Bottle Feeding
Nebraska Judge Rules Two Mothers Cannot Appear On Their Sons' Birth Certificates