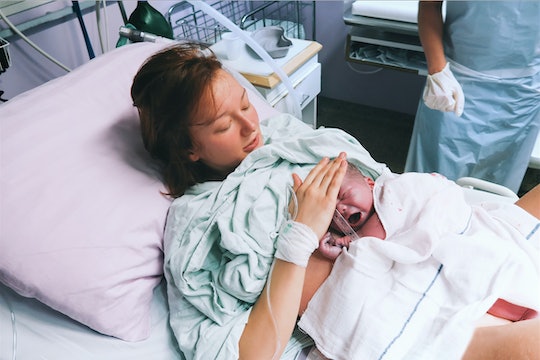 There's an old adage that claims, "A woman's war is in the birthing bed." Granted, it's from George R.R. Martin's A Song of Ice and Fire series, but I'm going to roll with it. Why? Well, because it reflects how we often view birth. We frequently regard the pain a woman feels as noble, valiant, and, above all, a necessary aspect of "real" birth. But pain does not legitimize birth. In fact, a lot of the ways we have viewed birth have changed with time to the point that seeing any aspect of the process outside of "getting a baby from inside a uterus to outside a uterus" is an unnecessary detail.

Up until recently, birth has looked pretty (if not completely) universal within the scope of "the West." It was seen as as an unavoidable, frequently compulsory, painful, potentially deadly, and exclusively female experience. Historically, and on the whole, that's been a pretty solid characterization. But times change, though not everywhere all at once. Sometimes the change is painfully slow, but it inevitably happens nonetheless. And when it does our perceptions and concepts of the status quo change along with it.

Let's start with the idea that reproduction has largely been seen as required and/or unavoidable.

In the Christian tradition, "be fruitful and multiply" was considered a divine commandment. Jewish tradition also held to this belief. Women, forced into marriage either in fact or out of necessity, were expected to bear children. Even in if a woman and her husband decides they were done growing their family, there were no particularly effective means of birth control short of abstinence. Even then, both partners would have had to agree to a life of celibacy, as spousal rape was considered perfectly permissible since a wife was obliged to "submit" to her husband. This is, of course, to say nothing of enslaved women, whose reproductive choices were even less tenuously within their control.

Moreover, the expansion of women's rights has correspondingly challenged the idea that birth is a necessary milestone to achieve "womanhood."

But contraception — condoms, birth control pills, and access to safe abortion services — enabled women and families to change the narrative. Moreover, the expansion of women's rights has correspondingly challenged the idea that birth is a necessary milestone to achieve "womanhood."

While it cannot be argued that birth is still a risky business (the maternal mortality rate for Sierra Leone, for example, stands at approximately 1,360 per 100,000 births), medical advancements have plummeted maternal and infant mortality rates in many places in the world.

Countries like Finland, Iceland, and Greece, for example, see approximately 3 maternal deaths per 100,000 births. Even the United States, which has among the highest maternal mortality rates among developed nations, is about 26 maternal deaths per 100,000 births. While this statistic is unacceptable and tragic, maternal mortality was approximately 33 percent higher at the turn of the 20th century, when it stood at about 850 per 100,000 births. This kind of a drop would have been unimaginable to people of another age. Yet here is another previously undisputed, perpetual truth of childbirth — the knowledge that there was a chance someone was going to die in the process — that has become less and less true.

And while other, perhaps more civilized, cultures than our own have long recognized trans and non-binary people, so-called Western culture is relatively new to acknowledging this concept. There's still a long way to go and a lot of progress to be made to see full acceptance and equality, but our understanding of sex and gender is changing. As a result, more and more people are realizing that you can be a man and have the necessary anatomy to give birth. Birth, we know now, is not exclusive to women.

While there is still debate on every one of these points (because the only thing that doesn't seem to change is the colossal amounts of baggage society likes to heap onto female bodies), the fact is that the narrative is shifting in ways that have been stagnant in the past. Our concept of what birth is, it turns out, can change based on any number of factors.

This brings me to the idea of childbirth as being a necessarily painful experience. Of all the points I've raised so far, this one has been contested the longest. Because whereas reproductive choice, drastically reduced mortality rates, and trans visibility are all largely within the purview of the 20th and 21st centuries, medical pain management for childbirth dates back to the 1800s.

Claiming that someone who forgoes pain relief has some agenda other than "this is how I want to have my baby" is just as problematic as someone shaming another person for getting an epidural.

In 1846, Dr. William Morton performed the first successful surgery with anesthesia (If you needed surgery before this period... good luck with that, because you were in for a really awful experience). The revolutionary possibilities of these new techniques were thrilling, so of course practitioners were keen to see how they could use them for the benefit of their patients through labor and birth. In 1850, Queen Victoria famously used ether during the delivery of Prince Arthur, so I suppose she can be credited with start this trend (as well as white wedding dresses and Christmas trees).

While this did pique public interest in the possibility, however, most women continued to deliver without the use of anesthesia, giving birth at home.

In the early-20th century, more and more women were going to hospitals to have their babies. Around this time, a team of German doctors developed what they referred to as Dämmerschlaf, which was translated into English as "twilight sleep." Using a potent combination of morphine and scopolamine, doctors claimed to be able to effect a "painless birth" and, as you can imagine, demand went through the roof.

When you're talking about something so powerfully monumental as bringing a brand new human into the world, everything else is a detail.

Unfortunately, demand outpaced the supply of properly trained doctors. When successful, the technique was very personalized and precise. But in many cases, doctors provided doses of the drugs that did nothing to alleviate pain, but simply made the mother amnesiac: birth was still painful, but they wouldn't remember anything. A 1959 article in Ladies Home Journal titled "Cruelty in the Maternity Wards," prompted by a letter from a whistleblowing nurse, detailed the many indignities and horrors some women experienced while giving birth — *traumatic birth trigger warning to the end of the paragraph* — including being tied to a bed, cut and sutured without appropriate painkillers, and even having their legs tied together to avoid delivery while the doctor had dinner.

The backlash ushered in the natural birth movement, which really began to hit its stride in the 1970s, at which point women were no longer routinely put under to give birth. Women were questioning standard birth practices. After all, for most of history women gave birth at home, with no drugs, with the assistance of a midwife. Hospital birth and all the modern conventions that went with it were less than a century old. Were they necessary? Did the potential for good outweigh the tremendous harm many women had experienced?

While the vast majority of American women give birth in a hospital, and most of them use some form of anesthesia (usually an epidural), there are those who continue to argue against the idea of any sort of pain relief whatsoever. Pain, they argue, is how birth is "supposed" to be. It is the natural way of things and should not be tampered with. Without the pain, one cannot truly experience what birth is meant to be.

But there is no more basis for that argument as there would be for saying, "Without experiencing the real and natural terror that you or your baby has a pretty good chance of dying, you just aren't experiencing real birth." Or, "Unless you are having a child to fulfill your spiritual and religious obligation to God, you aren't having a real birth. And if you don't do that you are not a real woman." Or, "Men can't give birth." Certainly, anyone can feel free to choose whatever sort of birth experience they wish to have. Claiming that someone who forgoes pain relief has some agenda other than "this is how I want to have my baby" is just as problematic as someone shaming another person for getting an epidural. But let's not pretend that what birth "is" a fixed concept, either practically or socially.

Pain can be a part of childbirth... or not. Neither legitimizes or delegitimizes the process. When you're talking about something so powerfully monumental as bringing a brand new human into the world, everything else is a detail.