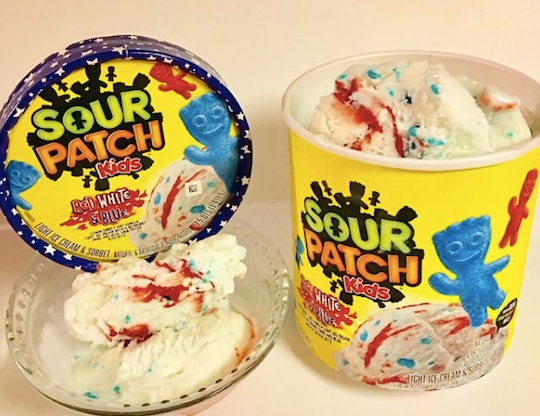 You Guys, This Is Not A Drill — There Is Now Sour Patch Kids Ice Cream

Are you a fan of mixing sour and sweet? This may just be the perfect ice cream treat for you. This isn’t just your typical light vanilla ice cream, it’s got lemon sorbet mixed in, too, and there’s even a “Redberry swirl snaking through it,” which Delish described as “essentially liquid Sour Patch Kids.” My mouth is watering and puckering at the thought of this (and not necessarily in a good way).

But the liquid Sour Patch Kids swirl isn’t the only thing that makes this the ultimate Sour Patch Kids ice cream treat — there are actually pieces of Sour Patch Kids candy thrown into the mix as well, just in case the lemon, and Redberry swirl weren’t tart enough for you.

The only downfall I see to this, other than it being overly sour and not super pleasant, is that ice cream tends to make the gummy candy rock hard. My friend Justina and I learned this the hard way after putting gummy bears in our ice cream at The Golden Corral when we were kids. She literally chipped a tooth and I really hurt my jaw. Not a fun day. And I'm sure those little Sour Patch Kid jerks would have laughed at us.

But seriously, what good timing for this Red, White, and Blue treat as summer is on its way. And if this ice cream isn’t enough to satisfy your sweet and tart tooth this summer, you can always check out the Popsicle brand’s Sour Patch Kids popsicles, which feature lime, raspberry and orange pops for your puckering pleasure, and Dippin’ Dots even has a Redberry Sherbet variety of dots, according to Delish. Though exciting, this isn’t the first time Sour Patch Kids has teamed up with an ice cream. Baskin-Robbins released their Sour Patch Kids Redberry Blast ice cream around this time last year.

Instagrammer The Impulsive Buy has been asking folks to snap pictures of this Sour Patch Ice Cream and Sorbet concoction as they see it — among other weird new food fads, like the Dunkin’ Donuts Caramel Chocoholic Donut, McDonalds Szechuan Sauce, Unicorn Bread (you read that right) — and now even a Sour Patch Kids Watermelon Ice Pop has been spotted at the Dollar Tree. Doesn’t look very appetizing to me, but whatever floats your boat, right?

Is this the summer of the Sour Patch Kid flavored and unicorn inspired everything? It certainly looks like it. We’ve got two types of Sour Patch Kid flavored frozen treats (so far), and unicorn everything, from bread, cake, floats, sprinklers, ice cream, humidifiers, and even toilet paper. Looks like this summer will be sparkly, brightly colored and sour. I hope you love unicorns and enjoy “sour, sweet, gone,” treats. Hopefully the "kids" in this ice cream won’t cut one of your pigtails off in your sleep, or make a giant pineapple fall on top of your car when you’re not looking. But if sour and sweet treats are your thing, be on the lookout for this peculiar ice cream treat exclusively at Walmart, where a representative says this will be the only place you can find this treat. And it's only $3.48, so you can't beat that.