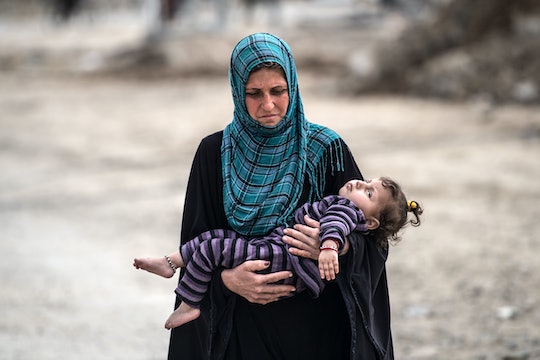 War In Iraq Is Terrorizing Children

In early April, President Donald Trump contradicted his own stated campaign-era isolationist views toward the civil war raging in Syria and authorized the first U.S. military action of the six-year conflict there. He was moved, he said afterwards, by disturbing images of children suffering in the aftermath of a chemical weapons attack in a residential town in the northern part of the country. Widely believed to have been launched by the Syrian government itself, the sarin gas attack killed more than 100 people and was just the latest in a seemingly endless barrage of slaughter and carnage leveled against civilians. But Syrian kids aren't the only children being terrorized by conflict in the Middle East. The war against the Islamic State in Iraq is another example of the horrors of war.

Not long before the chemical attack in Khan Sheikhoun, Syria caused another cycle of soul-searching and convictions to help around the world — and prompted Trump to launch missiles into a Syrian airfield — a devastating airstrike hit a suburb of Mosul, Iraq. There, an American-led coalition is backing the Iraqi military in the fight against IS — and while targeting snipers associated with the terror group, the United States carried out strikes that ultimately left 150 civilians dead, according to The New York Times. Many of these, the newspaper noted, were children, sheltering with their families in three homes that were decimated.

The United States is investigating the strikes. But the fighting continues, and the the images and takes of unmitigated suffering that emerge from Mosul are reminiscent of that described by Bana al-Abed, a Syrian girl who, at 7, essentially live-tweeted her ordeal living in Aleppo, Syria, as daily attacks destroyed homes and killed her neighbors all around her. She was safely evacuated around the time the city fell from control of U.S.-backed rebels to the government in December.

Miraculously, Bana escaped without significant physical trauma. So many others weren't so fortunate, facing horrors like having surgeries to treat their wounds without anesthesia due to lack of resources; At least 652 Syrian children died because of the war in 2016. And in Iraq, the situation is hardly brighter: NPR's Jan Arraf recounted the story of a 4-year-old named Hawraa, who was ended up bleeding and burned on a neighbor's yard after the March 17 strike in the Mosul suburb caused her to be thrown from a window. The girl, who still can't see because of the shards of glass in her eyes and whose plastic boot melted into the skin of her leg, still cries for her mother, unaware that she died after the attack.

At least Hawraa survived. Majid al-Najim, a 65-year-old man who lived through the airstrikes that day but lost family members to them, described to The Guardian the unimaginable fate of some kids who were casualties of the fighting:

The days after were horrible. There were children shouting under the rubble. Nobody came to help them. The police told us yesterday that there was nothing they could do.

And as is the case when it comes to the million of Syrians refugees the civil war there has produced, fleeing presents dangers and renewed fears of violence. A 10-year-old named Nabaa, for example, attempted to escape from Mosul with her family March 31 "because fighting was raging around them, government artillery and helicopters were bombarding their neighborhood, and their food supplies were running out," Balint Szlanko wrote for the Associated Press. She and her brothers were injured by mortars as they approached Iraqi military lines — and now brain damage caused by a shard in her skull means doctors aren't sure whether she will ever be able to speak again.

That anyone should have to go through what these children in Iraq and Syria are experiencing seems impossible. But it is possible, because it's happening, and the world must not look away.