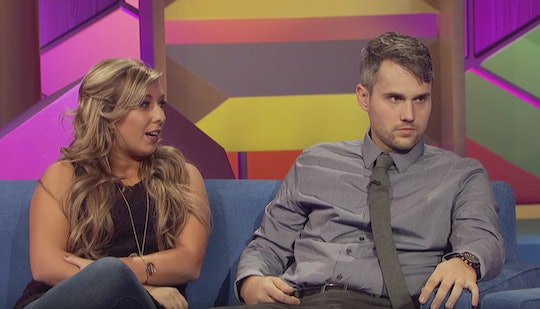 It's official — Teen Mom OG's Ryan and MacKenzie Edwards have welcomed a baby girl. The new mom revealed the exciting news on Instagram nearly two weeks after giving birth to the couple's newborn daughter, who they named Stella Rhea Edwards.

"Welcome to the world sweet Stella!" MacKenzie captioned a photo on Instagram of herself looking at Ryan holding their daughter. "Stella Rhea Edwards came on her own time and surprised us on New Years Day! What a way to start our year! We are so in love with her already."

The couple already have one child together, their young son Jagger, and two sons from previous relationships. Over the summer, the couple announced that they were expanding their family by one more. In July, MacKenzie shared on Instagram that they were expecting their first girl together in January, but kept most details about this pregnancy private, choosing to not post bump photos or other updates. So, it was certainly a treat for Teen Mom OG fans to see their baby girl's birth announcement on Instagram this week.

Fans of the couple, who have been laying low since leaving Teen Mom OG in 2018, quickly took to the comments to send their congratulations. "She is beautiful!" one fan wrote. "So happy to see everyone there welcoming her in!" Another said, "Congrats MacKenzie! You and Ryan deserve nothing but to be blessed with this precious little girl."

Over the years, Ryan and MacKenzie, who tied the knot in 2017, have gone on quite the adventure together. Teen Mom OG fans have been following Ryan since his first appearance on the MTV reality show in 2009, first getting to know him when he was in a relationship with Maci Bookout, the mother of his first child. Teen Mom OG has also documented his tough struggles with drug addiction and his journey to getting clean. Ryan's dad, Larry Edwards, told The Sun in December that Ryan is sober and that things are "going well" for the father of four.

Although it has been a while since fans have seen the couple and their little family on the show, there is a chance that fans could see them on their TV screens when Teen Mom OG Season 9 premieres later this year. Larry told The Sun just weeks before MacKenzie gave birth that a camera crew would be filming the birth of her and Ryan's daughter. So it sounds like Teen Mom OG fans will just have to wait for the new season to see how these last nine months have been for the two.