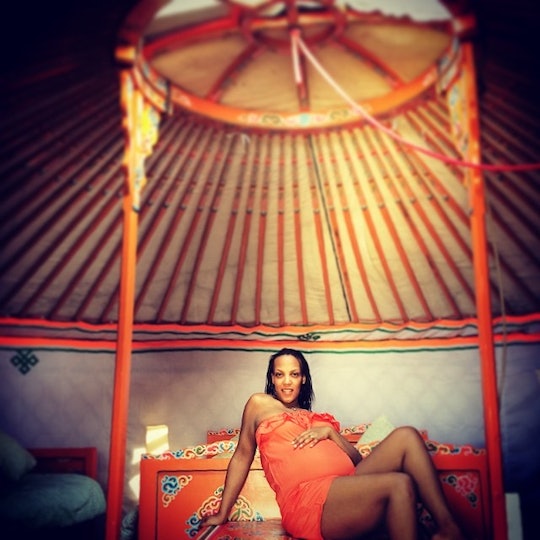 I can admit it: Having sex when you're pregnant can be awkward. Your body is changing, taking a shape and form you may not be entirely used to. Your body is doing some strange (albeit natural) things that you're experiencing for the first time, and your body seems to be doing it all on its own. Getting used to your pregnant body can take some time, so it only make sense that it would also take time to get used to someone else touching your pregnant body.

Couple that with our society's constant obsession with being thin and small, and many women find themselves feeling insecure about their pregnant bodies, and the sex they may or may not be having while they're pregnant. Our culture has taught women to be uncomfortable with the feeling of "fullness" or "wholeness," so for many women, unapologetically taking up space (like you do when you're pregnant) can be unnerving.

It can also be glorious.

While some women don't find the sex they have when they're pregnant to be enjoyable (and some don't have sex at all), many women have the best sex of their lives when they're pregnant, and it's because they've managed to go against the cultural norm — established by a misogynistic patriarchy that undermines women by convincing them to shrink themselves — and enjoy the feeling of fullness.

Sure, the high sex drive many women experience during pregnancy definitely doesn't hurt. The heightened estrogen levels throughout pregnancy lead to increased blood flow to the vagina, which is one reason many women feel the need to get down on the regular during their 40+ weeks. But there are plenty of women who, despite the increase in their sex drive, still feel hesitant to have sex while pregnant. In fact, many women feel like increased sexual desire is a "problem" during pregnancy; something they have to live with/deal with/ignore, because they're too uncomfortable and self-conscious to enjoy themselves sexually.

The key to truly enjoying yourself as a sexual human being — especially when you're pregnant — is being not only OK with, but happy and fulfilled by, the amount of space you take up in the world.

When pregnant women have amazing sex, it's because they don't mind that they're bigger, heavier, curvier, more noticeable (all the things that our culture has convinced women they shouldn't be). In fact, they love it.

As American women, we've grown up accustomed to a culture that carefully measures and judges what we look like. We learned that how we feel inside, isn't and never will be as important as how others view us. For many of us, this message — usually first delivered at a devastatingly young age — separates us from the natural connection between our bodies and our own sexual natures. Even if we feel sexual, we're told we shouldn't look sexual; Even if we feel powerful, we're taught that we shouldn't exceed a certain amount of power; Even if we feel like taking up space, we definitely shouldn't be intrusive.

For better or for worse, women see pregnancy as one of the only instances in which it is acceptable to take up space. They know that in order to sustain a fetus until it's fully formed and birthed into the world, they have to get larger, gain weight, and expand, at least to some degree. The majority of pregnant women aren't concerned about shrinking themselves into an "acceptable" pant size; They want to and enjoy getting larger and seeing their pregnant stomachs expand. That desire of fullness and wholeness is a desire suppressed by a society that values thinness, and that suppression bleeds into every other fact of a woman's life, including her sex life.

So when a pregnant woman has the best sex of her life, it's because finally, she has learned to enjoy the space she takes up in the world.

She's unapologetic about her form, her needs, her desires, probably because she is acutely aware that they're all as natural as pregnancy itself. She's not worried about how she looks while she gets off, because getting off is what matters most to her. She's not worried about the space her body consumes, the curves of her form or the amount of real estate her being claims as its own. And while it is sometimes a fleeting feeling of empowerment (sadly, usually destroyed the moment her baby is born and "losing the baby weight" becomes the latest socially constructed obsession on deck), it is still empowering. If only for a moment, a sexual pregnant woman is able to explore, love, and appreciate her full-figured form.

Sure, sex when you're pregnant can be odd and there's nothing wrong with feeling uncomfortable and somewhat unattached to your constantly changing form. But if you can get used to the changes you're experiencing, and learn to love the feeling of fullness, you just might be able to have the best sex of your life.

More Like This
Fun, Sexy Maternity Lingerie, For When The Mood Strikes
Meghan Trainor Shares Baby News After Dropping Hints On TikTok
22 Valentine's Day Pregnancy Announcement Ideas Sweeter Than Candy
Can You Have Sex While You Have A UTI? Experts Explain
What Parents Are Talking About — Delivered Straight To Your Inbox