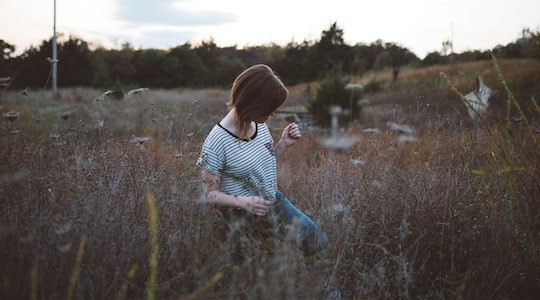 The list of things that change after you have a kid can be overwhelming, especially when you see sex somewhere towards the top. Not only do you have to give your body time to heal, you're navigating and familiarizing yourself with a new body, one which has just done this new, incredible thing. And that time of familiarization and discovery, honestly, can cause numerous changes in sex drive after having a baby. So many women feel that this stage of postpartum sexual indifference (or insecurity, or outright distaste, or exhausted disinterest, or...) is something they should hurriedly try to "fix," and before they are able to do so, should feel really guilty about. But the very real need for time and space — to let your body recover, to adjust and regain your sense of equilibrium, to feel rested and strong enough again to be down for getting down — is the one thing about sex you should never apologize for after having a baby. (Well, to be fair, you should never apologize for any reason you don't want to have sex, but it's especially understandable right after having a new babe.)

I was acutely (and sometimes painfully) aware of how my body (especially the lower half of my body) felt after I birthed my son. Not only was I incredibly sore, my entire being ached in an attempt to physically and emotionally recover from labor and delivery. I was sleep deprived, learning how to breastfeed, and continuing to allow another (albeit small) human use parts of my body in order to survive.

Needless to say, sex wasn't on my mind.

And honestly, I don't think it needed to be. Every woman is different and if you felt hot, horny, and immediately ready to have sex after having a baby, I say more power to you and maybe, one day, I can be you. But, for me, those first postpartum weeks and months were my time to focus on my new body and the things it could do, getting some much-needed sleep, and find some necessary space so I could start to feel comfortable in my own skin again. For month after month after seemingly endless month, another human was living inside of me and calling the shots. I didn't have control over bowel movements or nausea or heartburn or even food cravings, and giving control of your body to a growing summer squash is a strange, fantastic, and difficult task.

And contrary to popular belief, you don't regain that control the moment you bring a child into the world. If you're able to or choose to, there's breastfeeding, and if you opt to feed your baby that way, you don't get to decide when that happens — your baby and their tiny tummy are the ones pulling that trigger. You're in constant contact with another human, either co-sleeping or baby-wearing or getting in some simple (and necessary, duh) cuddle time. You're consistently needed, which means that you don't get very many opportunities for yourself.

Women deserve time and space to feel like themselves, and to feel like they want to have sex, regardless of what specific factors are contributing to them not wanting to during that time. And for a lot of women, feeling a stronger-than-ever needs to shut it down means confronting the fact that, maybe, they've never really comfortable doing that. The truth is, there are really no moments in a woman's sexually active life when it's deemed broadly acceptable to say, "You know what? I'm not in a sex phase. I am sexually dormant until further notice." That's not to say women don't say that, but it's certainly not something that is presented as a normal option once you're a healthy adult woman, and it's certainly not something that can be openly proclaimed without having to probably first overcome some internal and external judgment that says, "Ooohhh... You're gonna not be a sexual person for a while? Yeaaaah, that's pretty much going to make you a washed-up prude who is basically dead and is sad and wasting space on earth. Sorry." Like, women are told that it's always fine to say no to sex in isolated moments, but where is the outside validation for stepping out of the game for weeks, months, or even years, without the immediate implication that something is really wrong with you, or that you're failing as a woman?

We are the only individuals who should be in charge of our body, and with that ownership comes the right to ask — no; to demand — the capacity to feel comfortable, assured, and settled in ourselves. I would argue that birth makes this necessity painfully obvious, and that is why, if you need time before you start having sex again, you should never apologize for waiting to have sex until you're ready. I mean, this is something we tell all young women before the first time they have sex in their lives — why can't it be advice that we mirror throughout our lives?

Society seems hellbent on reminding women that, directly after giving birth, they need to lose the baby weight and appear desirable and start giving their partner sexual satisfaction, otherwise your relationship will be doomed and you'll end up parenting alone. We collectively praise women for this downright miraculous thing their bodies can do, but we're quick to forget or altogether dismiss what those bodies just experienced, because viewing women as sexual beings seems to be most important. Oh, you can have a baby? That's cool, I guess, but hurry up and fit into that one skirt so you can be visually consumed and lusted after.

I started feeling guilty that my partner was ~going without~ (a phrase that makes it sound like someone will literally die without sex), or that we weren't connecting in a way that used to leave us both completely satisfied. So, on top of feeling exhausted, emotional, scared, and stressed, I was feeling shame. It didn't take long for me to realize that these feelings of guilt are perpetuated by a society that would rather admire women for how they look than what they can do, and all it took was talking to my partner and expressing my needs, for those feelings to slowly crawl out of the corners of my mind. But, I still found myself saying (or wanting to say) "sorry" every time my partner was in the mood and I just wanted to pass out for 11 hours. I still felt lingering twinges of culpability, because years of indoctrination — about which things measure the worth of your body, and what things you need to do and be in order to measure up — are hard to shed, folks.

Which is why it's so important to remind one another that we don't owe anyone sex. Ever. Whether you're single at a bar and someone bought you a drink, or you're in a committed relationship for 17 years, you are the only one who says when someone can have sex with you. And if you don't want to have sex, you're not ready to have sex or you don't feel comfortable having sex just yet, you should feel comfortable saying so without apology.

Never, ever, say sorry for demanding the space and time you deserve, no matter where you're at in your life. But especially right after having a baby, give your body time to heal. Familiarize yourself with your new body. After all, it has just done a huge, difficult, awesome thing. Sex will still be there when you're ready.