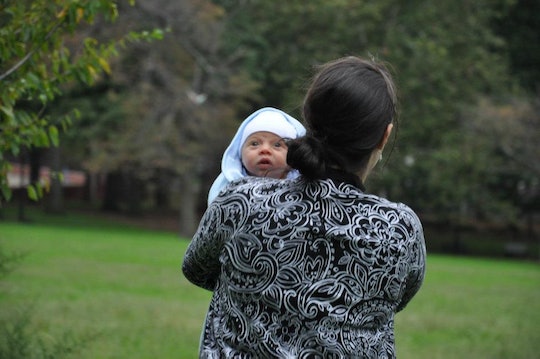 I knew before I had a baby that I really wanted to breastfeed. I wasn't vehemently anti-formula, and I didn't swear I'd never feed my baby "chemicals," but I was pretty determined to give nursing a solid effort to see if it was right for me. Turns out, it was! I loved breastfeeding. I was lucky, too, because my babies and I both took to it relatively quickly. That's not to say there weren't challenges, though. I had a lot to learn, including the one thing I ignored that could've made breastfeeding in public easier.

I've never met anyone who immediately knew how to breastfeed perfectly. Some people — lots of people, in fact — think that because breastfeeding is "natural" it means it's easy. This could not be further from the truth. Yes, breastfeeding is "natural" insofar as it is "something that can be done exclusively with naturally occurring objects (a baby and a lactating body)." But there's no value judgement here or inherent implication that it's easy in saying that something is "natural." You know what else is "natural" by that definition? Kicking a puppy (definitely not good) and contortion (definitely not easy). Still, after a completely reasonable (if strenuous) learning curve, I caught on pretty quickly. In fact, I had a handle on breastfeeding within a couple weeks of dedicated effort, more or less remaining holed up in my apartment, dedicating myself to learning all this new baby stuff.

But, as a socially hyper extrovert I was going positively stir crazy by, like, day five. A cloistered life was not sustainable in any way. And that's when I realized that I only had a handle on things when I was in the familiarity and comfort of my own apartment. But what was I going to do when I couldn't spread out on the length of a couch, in various states of undress and disarray with my baby propped up on a nursing pillow? I knew, after a while, that if I was going to have any kind of life whatsoever I was going to have to bring my baby out in public. Moreover, because he nursed every 90 minutes or so (he was voracious) I'd have to nurse him out in the wild. Thankfully, however, I'd prepared for this.

Even if a baby fights a nursing cover, for some people it may be worth the hassle. But when I really thought about it, that's not why I was using a nursing cover.

Among the many (many, many) items I'd purchased to prepare for my baby's arrival was this really darling nursing cover. It was cute, practical, washable, and had, like, four and a half stars on Amazon. (I live and buy by those stars, people.) There are lots of different kinds of nursing covers, but mine was basically like an apron — you slip it over your head and it would block the view of your hungrily slurping baby from public view. I was actually sort of excited about it, but you know who wasn't? My son.

The little man hated that thing. The kid didn't know he had toes yet but, somehow, he knew about the nursing cover and fought it as though it were satan himself coming for his soul. My adorable boob cape was his sworn enemy. He'd kick, he'd pull, on a good day he'd whine and on a bad day he'd wail his head off any time I put it on.

Nevertheless, I persisted. I kept bringing that thing everywhere I went and used it for months. I struggled to keep it in place while my thrashing infant protested against it. At least once per session, he would kick or pull the cover away from him, exposing my breast in the process and I'd flash crimson (or maybe I was crimson because keeping an already warm baby against your skin and under a blanket makes you hot AF).

Then one, particularly unremarkable day, I asked myself why?

Seriously, why was I going through the effort of "covering up"? Going back to the idea of breastfeeding being "natural," there's nothing wrong with a naked boob feeding a baby — nothing indecent that needed to be shielded from public view. Moreover, the law was on my side: where I was living (New York) there were laws that specifically protected my right to breastfeed anywhere I had the legal right to be. (Most states have similar laws and some specifically state that nursing mothers are exempt from indecent exposure laws.) So wouldn't it just be easier for me to pop out my breast and feed my kid without the adorable modesty apron? Why wasn't I just doing that? It's not even like I was exposing all that much of myself anyway. I mean, my baby was basically a human nursing cover.

Questioning the status quo and examining how that related to my own personal comfort made breastfeeding in public infinitely more relaxed, easy, and, yes, empowering.

Look, not everyone is comfortable breastfeeding uncovered. Some people are far more at ease keeping all their "bathing suit areas" from public view, and that's totally fine. Even if a baby fights a nursing cover, for some people it may be worth the hassle. But when I really thought about it, that's not why I was using a nursing cover. I was covering up simply because it hadn't struck me not to. I was so indoctrinated with the idea that "breasts must remain covered at all times" that I didn't stop to think "Actually, do I GAF about that? Sir, I do not."

And do you know what happened? Things got so much easier. When my son got hungry I'd feed him and, ironically, remaining uncovered meant far fewer people were seeing anything at all, because he wasn't always popping off and exposing my nipples. And when he did? Meh. They're nipples: most people have them and it's not that big a deal.

Questioning the status quo and examining how that related to my own personal comfort made breastfeeding in public infinitely more relaxed, easy, and, yes, empowering. I only wish I'd done it sooner, and I'd encourage all nursing parents to decide what makes them most comfortable when feeding their baby.