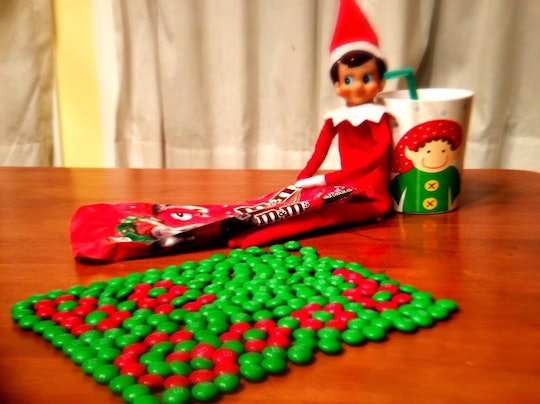 I do not own an Elf On The Shelf, and I've never, ever read the book it comes with. I do not know its purpose — aside from spying on small children or, as the officials at “Santa’s Workshop” claim, helping “Santa Claus manage his naughty and nice lists by reporting back to him ... nightly” — and my entire understanding the Elf is based on Amazon reviews and the critiques of fellow parents, writers, and friends. I only just recently found out the Elf is available with different eye colors and in different sexes, which apparently is distinguished by lashes or no lashes. We don't have an Elf on the Shelf in our home, and my daughter will never wonder if he's watching her or what he's reporting back to Santa on. She'll never wonder ifs he's being "good enough" or if she's on the "naughty list," and I am perfectly happy with that. Hell, I'm thrilled.

If the Elf is your bag, that’s awesome. Kudos to you. (Seriously. You must have the patience of a Zen master.) But there are a number of reasons my husband and I won't ever have an Elf in our house — and not because I’m not a curmudgeon or the Grinch, or even Scrooge. We love the magic of the holiday season, and we cannot wait to see our daughter’s face when she sees the gifts under our artificial tree or sees the crumbs and napkin left behind by Santa and his sleigh, but we also lazy. Like, seriously lazy. (Our coats never make it to hangers. Instead, they sit draped over the backside of our dining room chairs, and clean clothes rarely make it to the closet. The usually rest on top of our dresser, or folded on my rocker.) So the idea of committing to this “Elf project,” and agreeing to move him once a day and one-upping myself all season, every season, is daunting. I mean, you want me to spend every December evening scouring Pinterest for Elf ideas and then tiptoeing around the house so I can prop him on my daughter’s potty or hang him from the ceiling fan?!

No. No thanks. I’ll plop my lazy ass with a glass (ehem ... a bottle) of wine on my couch instead. I won't willingly make messes I'll be in charge of cleaning up the day, I won't concoct elaborate scenes for my daughter to skim over once she finds who's at its center. I won't stress that I'm not creative or clever enough, or that my daughter will notice on the seventh day that the Elf hasn't moved in a week. I will sit on the couch though, because that I am incredible at doing.

Sure, the initial investment is just shy of $30, but now you can get that your Elf a couture coat — the “Puffy North Pole Parka” — a tuxedo, or a letterman jacket. Or you can buy him/her a reindeer friend, cookie baking duds, or an ombré skirt. I'd rather spend that money elsewhere to make memories with my kid. I'd rather take her to movies we'll both love watching together again and again. I'd rather spend time at the zoo. I'd rather laugh and giggle and have ridiculous spur-of-the-moment dance parties instead of run myself ragged trying to remember to move an Elf throughout my house in the dead of night.

More than cost or creep factor, however, is that I want my daughter to listen to me and to respect me because she needs to. Because she has to. Because respecting your elders is an important life lesson, and one I want her to learn without gimmicks or gadgets involved. What's more, I want her to understand why I tell her things. I want her to know that running with food in her mouth increases the likelihood that she'll choke, and that saying "please" and "thank you" are always courteous and respectful. I want her to learn from her mistakes instead of just stopping what she's doing because some creepy Elf is holding the idea of Santa and presents over her head.

I tell my daughter that Santa will only come if she is a good girl throughout the year, but I never use it as an excuse. I never say “if you don’t stop screaming/hitting/biting/throwing food/throwing toys, Santa won’t come,” and I never say, “Santa sees you when you’re sleeping; he knows when you’re awake” because 1) that's terrifying, and 2) I want my daughter to listen to me, not Santa, or the Elf, or the Easter Bunny.

Does that make me a sanctimonious ass? I hope not. Because truth be told, I don't fault parents who make such sweeping claims either. To each their own. It just doesn’t jive for me. Instead, I let Santa be a symbol of magic, a symbol of innocence, and not the “puppet master” behind the scenes.