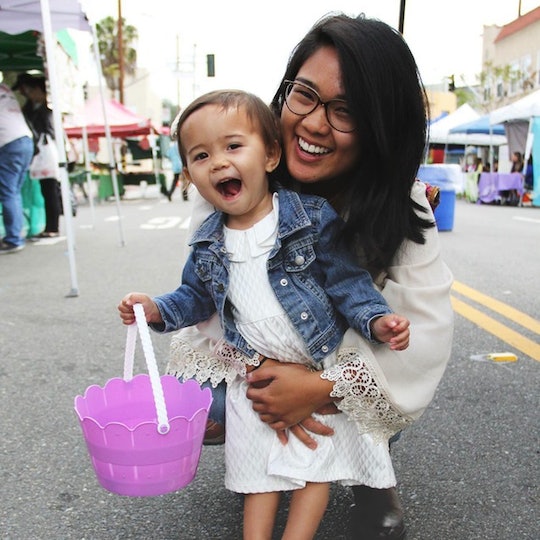 I used to glorify a woman’s ability to revert back to her “pre-baby weight.” I felt that it was a huge milestone that should be recognized and celebrated. Yet I now know after gaining and attempting to lose the 40 or some-odd pounds after having my own kid that asking a woman who bore a life (or lives!) to look like they did before they gave birth is beyond unreasonable. Though I don’t think anything is wrong with wanting to be healthy and fit, there’s a difference between addressing the concerns of postpartum health and placing an unhealthy expectation on a mother who grew a human inside of them for 10 months, and must now adjust to the task of caring for the human around the clock. Yet the one thing we ask women about their bodies after baby says a lot about how we view postpartum health.

Women are expected to gain between 25 to 35 pounds during pregnancy, and that number varies greatly depending on the person. Women lose about 10 to 13 pounds after birth, give or take a few, but there will be some extra weight that sticks around. The extra weight can’t be chalked up to poor eating or exercise habits; it’s a normal result of a natural process crucial to human existence. But when we ask new moms if they're working out, losing weight, or dieting after baby — even if it is meant to be a compliment — reveals the problematic idea that we view postpartum health as something purely physical and vain, paying little attention to the real mental and physical support mothers need.

Emotions ranging from tearful joy to tearful postpartum blues ebbed and flowed as I tried to make it through each day. The last thing I needed in the flurry of all the changes that come with a new baby was pressure to get back to my “pre-baby body.”

On top of carrying the extra stubborn weight I gained through pregnancy, my self-esteem as a brand new mother was already pretty low. My daughter never ceased to cry, breastfeeding was a painful adjustment, and I questioned every little thing I did, from how long I should let my baby’s butt air out to how often I should nurse her. Emotions ranging from tearful joy to tearful postpartum blues ebbed and flowed as I tried to make it through each day. The last thing I needed in the flurry of all the changes that come with a new baby was pressure to get back to my “pre-baby body.”

To be honest, I can’t distinguish anybody actually bringing up my weight. What I can recall was this slow trickle of information about how I was supposed to lose the baby weight. It started with a friendly email reminder about the changes that may occur with my postpartum body, followed by random Instagram accounts encouraging me to try these waist-tightening wraps, until it became article after article, photograph after photograph — all bombarding me with images of super lean moms with young children and exercises I could do while baby was napping. Like osmosis, I absorbed this false reality that I was somehow supposed to shed all this weight and look like a "MILF," and if I couldn’t do it in a reasonable timeline, then I'd be considered lazy.

I felt like total crap that I couldn’t somehow magically come up with the time and energy to get fit, yet merely surviving was the best I could do.

How I looked was one thing; how I felt was another. The true reality was that I was too exhausted from mothering to even lift a finger. I spent every spare moment for myself guiltily crying in the shower, stressing out about whether or not I was doing motherhood right. Any semblance of diet and exercise consisted of “eat anything I could hold with one hand,” and “rock baby back and forth for three hours after midnight.” I felt like total crap that I couldn’t somehow magically come up with the time and energy to get fit, yet merely surviving was the best I could do. And so, any concern about how I looked was desperately shoved on the low-priority list, right beneath sweeping the floor and washing my hair.

As I think back on those earliest memories of motherhood, I have no doubt that I spent some days sinking deep into the sea of postpartum blues. On numerous occasions I'd helplessly place my 2 month old in her playpen as she shrieked, walking away with this overwhelming sense of guilt that I couldn’t soothe my daughter no matter how hard I tried. Instead of focusing so much on the visual aspect of my body, I reached a point where I needed to actively redirect my focus on my mental and physical well-being. Cooped up within the walls that trapped my daughter’s cries, I strapped her up in a baby carrier and went outside to release all the built-up tension. I took my first solo walk with her one November afternoon, seizing the chance to let my doubts blow away with the wind as my slow footsteps lulled my daughter to peaceful sleep, her red cheeks pressed up against my chest.

Our afternoon walks became a routine because it was essential for both of us to get outside to soak up sun and just breathe. I guess you could say I started to exercise that day. But to be frank, losing weight wasn’t my objective. Maintaining my sanity, I realized, became the only way I could undertake the demanding tasks of motherhood. It was the therapy I needed without feeling guilty about putting my child down. Our walks got longer as we grew brave enough to go further. My daughter outgrew her carrier, so she opted for a jumper that allowed her to bounce along as I did quick home workouts. Exercise was a way for me to tear down the anxieties that built up, and my physical appearance had little to do with my motivations.

I remember when I started to sport my old pre-baby clothes in public for the first time since giving birth. I would receive comments from my friends like, “Wow, you look really great!” or, “I couldn’t even tell you had a kid!” I totally relished in these statements, finding satisfaction in how I could appear to be the kind of woman who has it all together with a body that bounces back with unrelenting youthfulness. But that’s simply how it appeared: underneath the strategically layered clothes was extra skin and pounds that hugged random spots of my body traced by silver lines that wove around from my belly button around my back.

It implied that I had overcome a weight or physical “problem,” when in actuality, my body was now the site of miracle and I toted the stripes and wisdom to prove it.

I almost fed into the “pre-baby body” hype. I even felt inclined at one point to post a picture of myself in a pair of old, high-waisted jeans that happened to fit one year after giving birth to my daughter, just to solidify to my social media followers that motherhood didn’t change this bod. As I sat there swiping through numerous selfies, applying filters and casually touching up the picture, I wondered to myself, who am I impressing? Why was I so thrilled to share an accomplishment that may actually have underlying tones of body-shaming? How would mothers who have tried so hard to lose post-baby weight, on top of the physical and emotional demands of caring for their children, feel about my boasting?

I recalled how crappy I felt when I was flooded with “encouraging messages” of postpartum weight-loss strategies. I never posted that picture. I deleted it. I knew that even I wouldn’t find a post like that positive, helpful, or endearing. It implied that I had overcome a weight or physical “problem,” when in actuality, my body was now the site of miracle and I toted the stripes and wisdom to prove it.

Two years after the birth of my only child, and I still don’t look exactly the way I did before I had her. At this point, I’ve lost any desire to look like my pre-baby self. I see myself in the mirror, with undeniably broader hips, and I salute this woman for lifting the heavy weight of motherhood with honesty, poise, and bravery. I’m a much happier mom now, and it’s not because I can fit back into jeans, but because I am in a better mental state of mind.

Motherhood is already strange and isolating territory, and the last thing women with children need is to be bogged down by the unreasonable expectation of a pre-baby figure. That’s why I think it’s crucial that we don't place pressure on a woman to shrink back down to whatever she looked like before kids, because that’s not who she is anymore. Let’s instead focus on what a postpartum mother may need in order to thrive in her role as a parent. Postpartum health isn’t something we can measure through physical appearance or weight-loss progress; it’s an all-encompassing process that takes adjustment, support, and a whole lot of encouragement.

More Like This
14 Recipes For Sick Kids When Everyone's Tired Of Canned Soup & Crackers
Dealing With Postpartum Back Pain? Physical Therapists Share Their Tips
Pelvic Floor Exercises You Can Do At Home To Stop The Spritz
Julia Fox’s Apartment Tour Is Peak Mom Realness
What Parents Are Talking About — Delivered Straight To Your Inbox