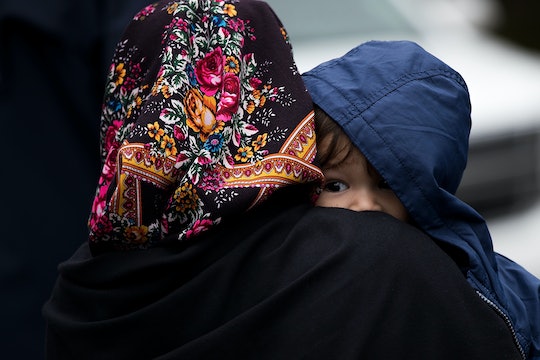 Here's What Obamacare Did For Mothers

It can't be said enough: Former President Barack Obama's Affordable Care Act changed the healthcare industry forever. The landmark bill — also known as Obamacare — made healthcare accessible and affordable to millions of Americans left out because of high premiums and discriminatory practices. This is particularly true for women, people of color, and lesbian, gay, and transgender people. So what did Obamacare do for mothers? Obama's historic healthcare law made it possible for parents — especially mothers — to both care for themselves and their children without worry or fear.

There's a lot at stake for parents if the Affordable Care Act were to be repealed and replaced. Right now, Congress is considering the American Health Care Act (ACHA) the GOP's lackluster answer to the ACA. The House planned to vote on the replacement healthcare bill Friday afternoon, but that vote was delayed once again after House Republicans pulled the ACHA at President Donald Trump's request, according to Mic. For most of the country, this is a welcomed postponement; if Congress actually passes the AHCA, then anyone who isn't a straight, white male could say goodbye to vital provisions and services that made staying healthy and fit possible. And this would have a tremendous impact on mothers.

Here's a few of the crucial things Obamacare did for mothers.

Before the Affordable Care Act, insurance carriers weren't required to cover maternity care. In fact, more insurance companies didn't offer maternity care as an option. But, under the ACA's "essential health benefits" provision, maternity care became accessible to and affordable for all new parents, no matter if you're privately insured or enrolled in Medicaid. Among other benefits, insurance carriers are now required to cover breast-pumping devices and support, and employers must provide a lactation room to chest-feeding parents that isn't a dirty bathroom.

The Affordable Care Act eliminated discrimination in the health insurance industry in two key ways: It barred carriers from rating plans based on gender and prohibited insurers from denying coverage based on pre-existing conditions. Those two provisions had a tremendous impact on parents. That meant that, because of the ACA, insurers could no longer use pregnancy as a reason to deny parents-to-be insurance. That also meant parents no longer had to worry about their adult children losing health insurance because they may have a disability or chronic illness. And that meant that mothers and fathers would pay the same amount in insurance premiums because being assigned female at birth was no longer allowed to be considered a "risk."

Before the Affordable Care Act, kids were kicked off their parents insurance by the age of 19 in most states. That left hundreds of thousands of older children uninsured because, for most young adults (and people in general), health insurance is unaffordable, even if you have a job that offers the benefit. To solve that issue, the Obama Administration included a provision in the ACA that allows children to stay on their parents' insurance plan until age 26. That means mothers can keep their kids healthier for longer.

Keeping the Affordable Care Act in tact is crucial for parents. The vote on the AHCA may have been delayed again, but that relief will only be temporary. In the meantime, let's hope lawmakers in Congress come to their senses.