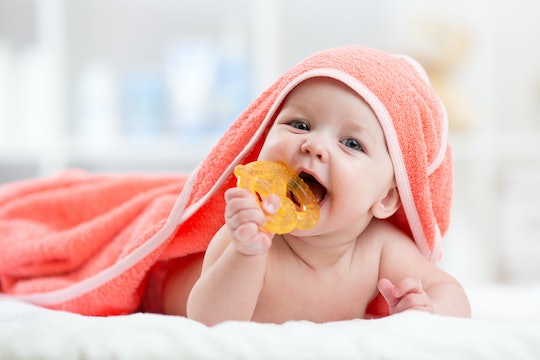 Ugh, Here's Why Teething Seems To Take *So* Long For Your Baby

When your baby gets their first tooth, it's so adorable. That gummy grin with that single tooth popping up is pretty much the best — until those pesky pointy teeth start pushing through and your baby hates life. Let's not even talk about how bad molars are. Years later, I still don't think I've caught up on the sleep I missed those long nights. It helps knowing this time is finite. But how long does it last? When should a baby stop teething?

Unfortunately for everyone involved, baby teeth take their precious time coming in. According to the American Dental Association (ADA), the first tooth generally comes when your child is between 6 and 10 months old and the rest stagger in for years. Yes, you read that right — years. Dr. Jonathan Wong DMD of Coastal Pediatric Dentistry wrote that, "Typically the first tooth erupts or 'comes into the mouth' around the age of 6 months. This tooth is the lower central incisor. Children should have all 20 primary teeth by 3 years of age."

Dr. Wong also wrote, "Do not be alarmed if your child’s teeth erupt early or a bit late, because there is large variability in eruption timelines, especially between boys and girls (girls tend to have tooth eruption earlier than boys)." Like any developmental or growth milestone, there's a decent range to what is considered normal. But the one thing they do urge all parents is to take their babies in to the dentist for their first checkup after their first birthday, and after they've had some teeth erupt, so that your child can become accustomed to going to the dentist.

My son started getting his teeth really early. His first two teeth erupted simultaneously at 5 months, followed quickly by his top incisors two months later. It was quite a trying time. He was cranky, bloated, and the drool would have to be measured in buckets. I did find a few solutions to his pain, though. He loved it when I'd dip a clean washcloth in water and freeze it, then give it to him to gnaw on. This was his favorite teether.

Gentle Dental Michigan suggested rubbing their gums with a cold spoon off and on during the week to week and a half long period it takes for a tooth to erupt. This not only provides pressure to the pained area, but the cool metal is soothing and familiar. There is one extremely popular remedy that we should not be using, and that is those amber teething necklaces. Dr. Jason Wong wrote on his website that "amber necklaces often have small parts that can break free and a child could swallow the amber, or worse yet, choke on it." And beyond that, there's zero evidence for the practice.

However, there is a really cool trick I used with my son. Place a bunch of bottle nipples upside-down in an ice cube tray and fill them with breast milk. I'd then screw them onto a bottle of slushy cold breast milk, let the tips get a little slushy, and then allow him to chomp away. Gentle Dental Michigan offers a version of this idea, saying you should offer your baby cold food if they're taking solids, otherwise, use really cold milk or formula.

Beware, while your child is teething, the American Academy of Pediatrics (AAP) warned, "Teething occasionally may cause mild irritability, crying, a low-grade temperature (but not over 101 degrees Fahrenheit or 38.3 degrees Celsius), excessive drooling, and a desire to chew on something hard." The fever thing threw me with my first child. It seems strange, but my son absolutely got a low-grade fever with each new tooth. As for the "mild irritability?" I think the AAP and I may disagree on what that means. You say mild irritability, I say "never ending hellscape."

If your child isn't getting their teeth when you think they should, most of the time it's not actually a cause for concern, says Connecticut Pediatric Dentist. If your baby is otherwise developing normally, it could be heredity, but it could be your child is just a late bloomer. They wrote, "If a child does not have any teeth by the age of 18 months, he or she should be taken to a pediatric dentist for an evaluation."

If you're worried earlier than that, talk to your pediatrician, and see what they say. My daughter was just the opposite of my son — she didn't get her first tooth until she was almost a year old. However, it was a marathon after that, and she had all of them in by 30 months.

Teething isn't fun, and sometimes it feels like the parents need more ibuprofen than the kids to get through it. Thankfully, by the time they're about 3 and causing havoc for other reasons, they can do it with all their teeth.