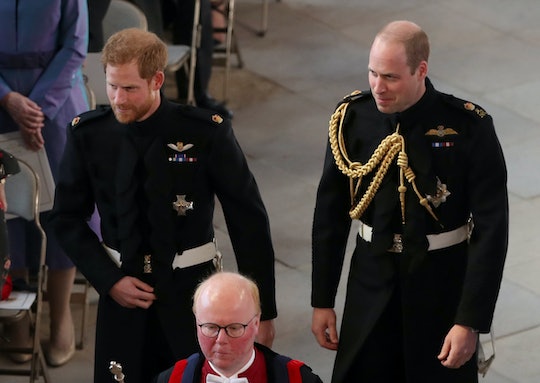 After Meghan Markle, the Duchess of Sussex, made her way to her groom, Prince Harry, the Duke of Sussex, at St. George's Chapel, there was a moment when the crowd burst out in a fit of giggles, but why did guests laugh at the royal wedding?

Apparently, when asked for his vow to be affirmed by the priest, Prince Harry replied "I will" so loudly that the crowds outside cheered, causing a trickle of laughter to flow though the stiff upper lipped Brits inside the church. In fact, there were several moments marked with cheer and emotion during the royal wedding, from the laughter in the pews at Harry's "I will" to Reverend Curry's impassioned service that touched on everything from Leviticus to Instagram in a moving sermon on love, respect, and the traditions of marriage.

For her part, Markle's mother, Doria Ragland appeared to have been fighting back tears of joy for the duration of the service. Her Majesty the Queen of the United Kingdom kept a placid expression on her face during the wedding, a quiet smile in place for her beloved grandson's special day.

Harry is known to be the jovial, expressive prince, full of spirit and humor, and his excited pronunciation of "I will" was definitely in line with his history.

Harry's love for his bride glowed from him as he gazed upon her walking down the aisle. The humanity of the laughter, and of Meghan's quiet smiles for her groom, made the entire royal affair feel like a new, fresh way to celebrate a royal couple coming together in matrimony.

British weddings are traditionally very stodgy affairs with loads of pomp and circumstance, but lacking in any real emotional quality. In fact, the one real moment of feeling remarked upon during Prince William and Kate's wedding was when Harry joked with William as Kate walked down the aisle. So it comes as no surprise that Prince Harry would be the locus for the fit of laughter that erupted from the audience during his own wedding.

This wedding was never going to be like the weddings of history, though. From the start Meghan and Prince Harry made every change possible that they could to the elaborate affair, from inviting regular members of the public to share their special day at the grounds of St. George's Chapel, to the American bishop giving the service, to a choir that sang "Stand By Me" as Harry stole glimpses of his bride.

As they made their way out of the chapel, Harry and Meghan positively beamed at each other and the onlooking crowd. The faces of the guests at the chapel were more animated than most of us have ever seen at a royal wedding, and the sound of the cheers as they exited the chapel were deafening.

The kiss they shared as they made their way into the British sunlight looked real and heartfelt, no doubt a spontaneous reaction to the crowd cheering for them, yelling "kiss!" They yelled for a second kiss, but to no avail. Traditionally, the first kiss comes long after the wedding when the couples makes their way to the balcony for their official presentation as husband and wife before the crowds. But, as time has told us, we have no idea what to expect when it comes to this set of royals. If anyone was to completely buck all the trends that have come before, it would certainly be Prince Harry and Meghan Markle.

One thing we know for sure: their wedding was just the beginning of a long and beautiful romance that the public will be begging after for years and years.