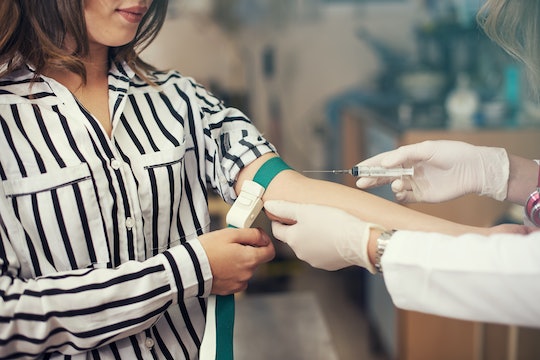 Everything You Need To Know About Blood Tests For Pregnancy

Determining whether or not you’re pregnant is one of the most important tests a person can take. In most cases, this is done with an over-the-counter pregnancy urine test. But there’s an alternative method available that everyone should know about: a blood test for pregnancy.

How does a blood test for pregnancy work?

Another means to measure human chorionic gonadotropin (hCG) — a hormone for the maternal recognition of pregnancy — blood tests can quickly and efficiently indicate whether or not a person is pregnant, Dr. Otis Stitt, an OB-GYN and Director of Minimally Invasive Gynecological Surgery at the University of Maryland School of Medicine, tells Romper.

“The pregnancy test is a test that evaluates the presence of a hormone that's released when an egg is fertilized,” explains Stitt. That would be that aforementioned hCG hormone. “That’s the hormone that circulates in the body and is one of the most specific identifiers of the presence of pregnancy.”

Determining whether this hormone is present can be done by testing urine or blood.

For pregnancy blood tests, “the process involves coming in to see a doctor, having blood drawn, they send it to the lab overnight and get a result as early as the next day,” says Stitt. That said, if a patient went to the E.R. due to abnormal vaginal bleeding, a blood test for pregnancy could be administered on the spot with results returned within as little as a few hours time depending on the situation.

“With the blood test, you'll find that you can determine whether pregnancy exists within four to six days after ovulation occurs and the egg is fertilized,” says Stitt. The reason for this is that the blood has to be circulating through the body before it goes to the kidneys and then into the urine. So the hormone is present in the blood before the kidneys break the blood down and it gets into the urine.”

Basically, by testing the blood you’re going straight to the source to measure the hormone rather than testing urine which has to wind its way from the blood to the kidneys.

How early can a blood test detect pregnancy?

Stitt says you can identify a pregnancy through urine as early as two weeks after the ovulation, where a blood test can do it within 4 to 6 days. “So depending upon how eager a person is in trying to find out whether or not she's pregnant, she may go for the blood versus the urine,” says Stitt.

Can you get a false negative with a blood test for pregnancy?

Short answer: yes, you can get a false negative with a blood test for pregnancy.

“There is a condition that exists where a blood test can be false negative,” says Stitt. “Nothing is 100%.”

That said, the overall efficiency of the two tests is very similar. A study in Annals of Emergency Medicine found the blood test to be 99.5% accurate while the urine test was 97.6% percent accurate. So both are very reliable options.

Stitt says you can also — albeit rarely — get a false positive, too with a pregnancy blood test. This is called a chemical pregnancy.

“It is a pregnancy that's only diagnosed by the presence of that human chorionic gonadotropin hormone,” Stitt says. Effectively, what happens is a person takes a blood test for pregnancy, typically very early, and the test results determine that the hCG hormone is at a high enough level to indicate a positive result. However, if those hormone levels don’t increase to the necessary level in time to stop the next menstrual cycle, “the natural cycle is going to continue to wash everything else that's inside the womb,” says Stitt. And because the menstrual cycle never actually stopped, this is not considered a miscarriage but rather the aforementioned “chemical pregnancy.”

Why choose a blood test for pregnancy over, or in addition to, a urine test?

For IVF patients, blood tests are often the standard choice for pregnancy tests and that’s because of their fast results and ability to help confirm the viability of a potential pregnancy.

“They want to know on the fourth day what the result is because in some cases, this can be a stressful experience. For some, it can be a financial investment and all that is important when you're really trying to achieve this goal of becoming pregnant,” says Stitt. “We're very sensitive to that. So we take care to offer IVF patients blood tests to determine the presence of pregnancy.”

Another reason a doctor might give a patient a blood test for pregnancy is if it’s very early on and a urine sample or ultrasound don’t yet detect a pregnancy yet. In that case, it’s a helpful option to get answers fast.

Ultimately, if you suspect you might be pregnant, Stitt encourages everyone to take an over the counter test, and then make an appointment with your medical provider as soon as possible so you can get the necessary care, pregnant or not, that you need be it with a blood test for pregnancy or other treatment plan.

More Like This
Breaking Down The Different Types Of Postpartum Infections
Are Movie Theaters Too Loud For Pregnant People? OB-GYNs Explain
All Your Questions About Getting Pregnant After A Tummy Tuck Answered
All The Reasons Why You Might Have A C-Section