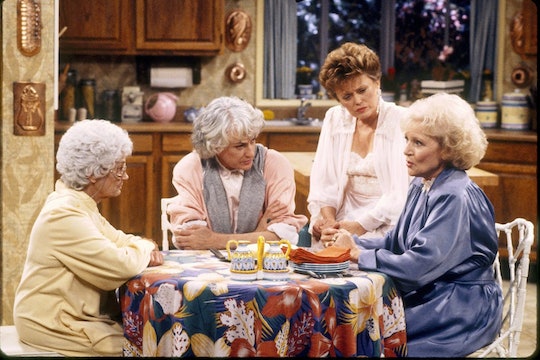 Get ready to slice the cheesecake!

Before there was a little show called Sex & The City, there was the very iconic and excellent television program about four amazing women galavanting around their home city. Yes, we’re talking about The Golden Girls.

The classic ‘80s sitcom centered around the lives of a bunch of feisty senior citizens living together in gloriously-tacky Miami. From relationship drama to family fall-outs, divorces to bad dates, Dorothy, Blanche, Rose, and (fan-favorite spitfire) Sophia had each other’s backs through thick and thin. Cue theme song and a full-throated rendition of “thank you for being a friend.”

Since going off the air, our beloved Golden Girls have become their very own cottage industry, with pictures books, shot glasses, Granny panties, and action figures, and now, lo and behold, the culinary gods have smiled upon us with a Golden Girls-themed restaurant.

Events company Bucket Listers, which launched TV-themed restaurants that tipped their hats to “Saved By The Bell” and “Beverly Hills, 90210,” set their sights set on opening an octogenarian-inspired eatery with some pretty delectable options. Here’s what we know about The Golden Girls Kitchen so far.

What’s on the menu?

The menu was created by “Lasagna Master”and Executive Chef Royce Burke, of Dino’s Famous Chicken, Secret Lasagna, and Wyldefire Hot Sauce. Entrees are inspired by characters like Sophia’s Lasagna Al Forno. There are also dishes that take their culinary inspiration from the show’s Miami setting, such as a “Miami style” Cuban sandwich. Of course, no true Golden Girls fan would think of ending a meal without a delicious dessert, and there’s plenty to choose from in the “St. Olaf’s Sweets” section of the menu, including Blanche’s Georgia Style Cookie and Clown Sundae. And of course, there is a variety of the foursome’s favorite late-night treat, cheesecake.

Fans of the Golden Girls know that the ladies of the show liked to kick back with a little adult beverage and unwind from their volunteer work or hot dates. Drinks on the menu include yummy-sounding concoctions such as “Southern Belle Libation,” Devereaux’s Dealight,” and “Lemon Basicl Lannai Cooler.” While it’s unclear if these drinks are spiked, they sound absolutely delightful!

Fans can expect to luxuriate in the Golden Girls ambiance.

When nostalgia is on the menu, fans of classic TV should expect attention to detail, and the Golden Girls Kitchen will not disappoint. According to The Huffington Post: “The restaurant’s interior borrows from the show’s pastel-heavy set, featuring a decorated lanai and lots of palm print. A fully-realized replica of Blanche’s bedroom, with its banana leaf headboard and duvet cover, will undoubtedly provide plenty of Instagram content for visitors.”

“No detail was spared, no episode was left unwatched during our research phase,” Berry, Director of Experiences at Bucket Listers, told The Huffington Post. “We hope to transport guests back to a simpler time in life, taking in all the nostalgic memories of when they were watching this show. We also want them to leave with a full belly.”

Where can you get a table?

The first eaters lucky enough to enjoy The Golden Girls Kitchen will be Californians: the restaurant opened in Beverly Hills on National Golden Girls Day, July 30th! Following a Los Angeles debut, the restaurant will embark on a national tour with stops in n New York, Miami and San Francisco, and Chicago. If you’re too far away from any of these cities, you can always stream re-runs of the classic show, order in some cheesecake, and benefit from 17 important parenting lessons that only the Golden Girls can teach you.