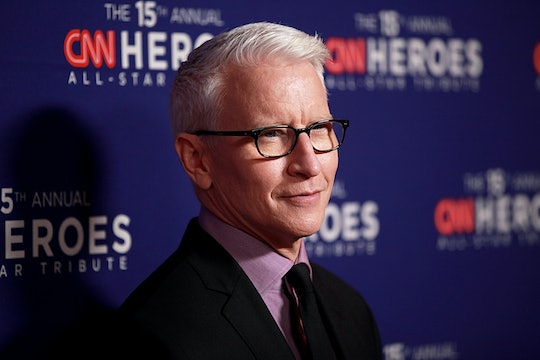 And their Christmas pajama game is strong.

There’s nothing better than seeing Christmas through a little kid’s eyes and no one knows that better than Anderson Cooper this holiday season. The silver fox and father of two recently shared the most adorable pictures of his sons on social media, and it looks like the Cooper brothers enjoyed some sweet sibling bonding and had a pretty stellar visit from Santa.

With all the pitter patter of little feet running through his New York City pad, Cooper was likely a very busy dad this holiday season. And now that the he has two sons to care for that also means double the presents under the Christmas tree. The CNN anchor welcomed 10-month-old Sebastian via surrogacy with his former partner and current co-parent, Benjamin Maisani, and the couple also share 2-year-old Wyatt.

The two boys looked thick as thieves as they gathered in front of a whole bunch of presents by the Christmas tree for Sebastian’s very first Christmas. In the first photo, Sebastian looked up adoringly at his big brother Wyatt like he was the real celebrity in the household. The second snap showed the two siblings side-by-side in their amazing outfits. Wyatt was ready for Christmas in his red and white striped pajamas with green trim, and Sebastian was cute as a button in his navy and white sailor look.

“Wyatt helped Sebastian celebrate his very first Christmas,” Cooper captioned the post. Fellow celeb and fairly new parent Naomi Campbell was quick to drop a bunch of red hearts in the comments section, as she was likely celebrating the holiday with her little one too.

Cooper is no stranger to sharing his growing joy on social media since his children have come into his life. He has been known to post some bedtime snuggles or just fun moments of toddler life like when Wyatt was in love with his own feet.

It’s so wonderful to see the proud dad build his own family considering that he has suffered a great deal of loss in his life before kids. Cooper’s own father died of heart disease when he was just a little boy, and when he was 21, his older brother died by suicide. On a recent Father’s Day, Cooper reflected on his grief and how much gratitude he has for his boys. “For much of my life, Father’s Day was the day i avoided, pretending it didn’t exist, or that i’d forgotten what day it was. The pain of remembering was just too great. The loss of my dad, who died when i was ten, was so painful, and still is at times. But today I celebrated Father’s Day, remembering my dad, Wyatt, with little Wyatt and Sebastian and their Papa, Benjamin. I can’t believe how lucky I am,” Cooper captioned a touching Instagram post of an ice cream run with his oldest son.

In light of everything he’s been through, it’s really moving to see Cooper building such special memories with his kids and witnessing the affection that they have for each other as brothers. Hopefully after everyone unwrapped their gifts, they were able to pop by for a boisterous play date with Cooper’s bestie Andy Cohen and his brood of cuties.