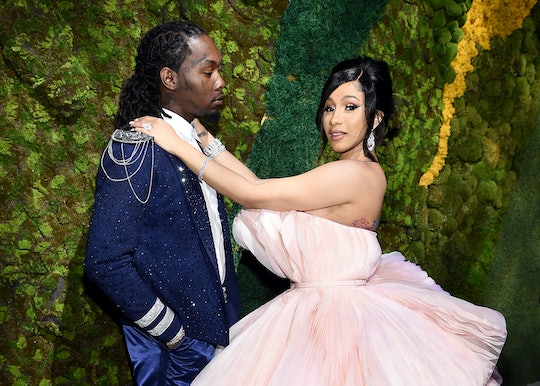 Grammy season is upon us and the chances are looking good for Cardi B! The rapper is nominated for Best Rap Performance at the 2022 Grammys for her single “Up.” But when Cardi B isn’t rapping, she’s doing the parenting thing with her two kids, 3-year-old Kulture Kiari Cephus, and her 6-month-old son, both of whom she shares with her husband, Kiari Kendrell Cephus, also known as Offset. The couple has not revealed their son’s name yet, but based on the tweets and posts she makes about her kids, we can figure out some fun, cute qualities about them. So here’s everything you need to know about Cardi B’s hubby and her adorable kids.

Cardi B and Offset’s relationship has had its shares of scandals and rumors but through it all, the couple has weathered the storm. The two met in early 2016 and began their romantic relationship in early 2017. Their first reported date was actually the Super Bowl in 2017, which Offset later recalled to Rolling Stone as a “bold move.”

Cardi and Offset secretly tied the knot in 2017 and were actually married for a month before their public engagement. “One morning in September we woke up and decided to get married,” the rapper tweeted about their Sept. 20, 2017 nuptials.

A year later, in 2018, Cardi announced her plans to divorce following Offset's alleged infidelity. But by December 2020, the couple had reconciled and are now in a great place. “Of course we went through some challenges,” Cardi told E! News Daily Pop in a November 2021 interview. “We had to get to know each other better. But I feel like I've never been happier. I really feel like [it's] not even just like marriage, it's the family, the unity, the friendship that we have, the ‘I have your back, you have my back.’”

In addition to his two kids with Cardi, Offset has three other children from previous relationships and has a need to secure generational wealth for all of them. “I need all my kids to be educated and wealthy,” he told Rolling Stone in 2018.

For Valentine’s Day this year, Cardi revealed she tatted her hubby’s name on her.

Her daughter Kulture is now 3!

Cardi B and Offset’s daughter Kulture was born in July 2018, and Cardi has proven herself to be a true girl mom at heart and has described her daughter as “sassy” with “a lot of personality.”

The pair normally match in designer clothes. And thanks to her parents, Kulture is quickly turning into a little fashionista. “My daughter came out of my p—-y rich,” Cardi told Billboard in December after the outlet named her Woman of the Year. “She lives a different lifestyle than I lived. This girl gets in a pool every single day; I can’t swim because I barely went to the pool. … I want her to know that just because you have money, that doesn’t mean you’re super-privileged.”

But she’s also about humility and teaching her daughter compassion. “Even me with her dad, we have had really bad experiences with police and we're rich and famous,” Cardi told Billboard. “I want her to know that you're not going to be an exception. I want her to have compassion. I don't want her to ever have the mentality of, 'This doesn't apply to me.’”

While Cardi B loves sharing her daughter on social media, she’s also fiercely protective of her. Earlier this year, she made her daughter’s social media account private after trolls started harassing her. Nevertheless, Kulture is just like any toddler. She loves to dress up, specifically in princess gowns. In fact, her birthday party last year was a fairytale theme.

Not much is known about the couple’s 6-month-old son, whom they welcomed on Sept. 4. The couple has been private about their latest addition to the family and have kept his face off social media thus far; no doubt to avoid the harassment their daughter received online.

But according to several interviews Cardi B has made, their son has already achieved a few major milestones. “This baby is talking,” Cardi told Entertainment Tonight back in January. “I put this on everything I love in the name of Jesus Christ. First of all, my husband saw it yesterday. I was like, 'You love mommy, yeah?' And then I asked him again, ‘You love mommy?’ And he replied back, like, ‘Yeah.’ Not even like [baby sound]. It was like, ‘Yeah.’”

The month before, Cardi shared another update about their son, announcing that he is holding his own bottle. “My son holding his bottle wit both his hands already,” she tweeted at the time. “I'm trying to remember if KK was doing that around three months old or if this is one of the superpowers these pandemic babies coming with.”

The whole family will make a Baby Shark appearance.

Cardi is grateful for her husband is kids.

Reflecting on her life in a March 26th tweet, Cardi spoke about how grateful she is for her family. “I’m young and I’m paid! My hubby paid, my kids are healthy and beautiful,” she tweeted, “my family is lit wit no worries, my friends are loyal, I’m living my life to the fullest!!”