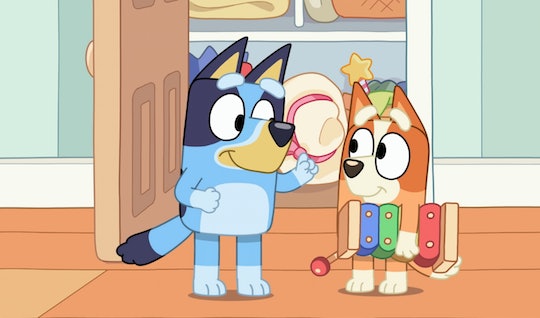 We Know How Old Bluey & Bingo Are, But The Sisters' Play Style Reveals Major Clues

Every detail nestled in Bluey is as thoughtful as it seems.

In a pretty short period, American parents have collectively seemed to move from telling one another “Do your kids watch Bluey? It’s kind of cute.” to asking “Have you ever thought about the symbolism in the “Flat Pack” episode of Bluey? But, like, really thought about it?” We’re not gonna lie: we get it! It’s a fantastic show, and has prompted fans of all ages to wonder more about the characters. Like, where is Bandit’s dad? Where does Bluey live? Or how old are Bluey and Bingo?

We may not know all the answers (#WhereIsBobHeeler?!) but we can help you with that last bit.

This is according to the official Bluey website, so even though there’s some online debate on whether she’s aged up to 7 in Season 3 (which is currently only airing in Australia with no U.S dates yet announced), we’re going with 6. Bluey is further described as “very good at inventing games, helping everyone choose their roles, and deciding on the rules.” (Classic oldest daughter behavior...) She especially enjoys games that involve lots of other people and those that give her an opportunity to pretend to do grown up things. Indeed, the show often depicts Bluey pretending to be things like a doctor, a queen (or a butler) and, of course, a granny named Janet.

Again, we’re going off the official site, here! Bingo is described as being a bit quieter than Bluey, and more likely to be, say, a customer than a shop owner in a game of make-believe store (though she’s happy to switch it up). She’s also more likely to be found “lost in her own, beautiful world,” enchanted by a bug in the backyard, or working doggedly (no pun intended) on perfecting her headstand (even if there’s a house full of people all around her).

It may seem as though the ages of the two pups are chosen at random. After all, it’s a show about talking dogs for kids in pre-school and early elementary school. It makes sense to just make the main characters the same age as the viewers, right? Well, sure, but even if it’s a show about talking dogs, fans understand that it’s very thoughtful and true to life in regard to how the characters act and interact.

"At the core of every Bluey story is a game, which is at least inspired by the everyday experiences of bringing up and playing with our kids. The thing young kids love to do best is play. To them it's as natural as breathing — it's how they explore and understand their world. We've tried to capture that and recreate those extended games, which can make vivid, surreal, and often very funny stories, especially when adults are dragged into the mix."

And it just so happens that, between the ages of 4 to 6, kids begin to play differently than they had before, and it’s the kind of imaginative, cooperative, communicative play we see represented in every episode of the show.

American sociologist Mildred Parten Newhall was the first to designate developmental stages of childhood play, all of which come in their own time and are crucial to body and brain development according to pediatricians. They are Unoccupied Play (0-3 months); Independent/Solitary Play (0-2 years); Onlooker Play (2 years); Parallel Play (2+ years); Associate Play (3-4 years); and, finally, Cooperative Play, which begins starting around age 4. At this stage, children work together, not only because they are interested in a common goal, but they have an increased appreciation for the people they are playing with. This is a stage in which communication, compromise, problem-solving, and imagination are of the utmost importance.

In other words: Keepy Uppy is fun, but it’s also the kind of game they girls could only really play at the precise ages they were written to be.

So there you have it: Bluey and Bingo are 6 and 4 years old! And, because the show is as thoughtful as it is, it’s something we could have guessed the whole time via developmental psychology!

More Like This
A Guide To Every Dog Breed In 'Bluey'
Netflix Has Lots For Families To Look Forward To This August
Exclusive: CoComelon Is Going On A Live Tour Across the U.S.
10 Of Bandit’s Funniest Dad Lines From 'Bluey'